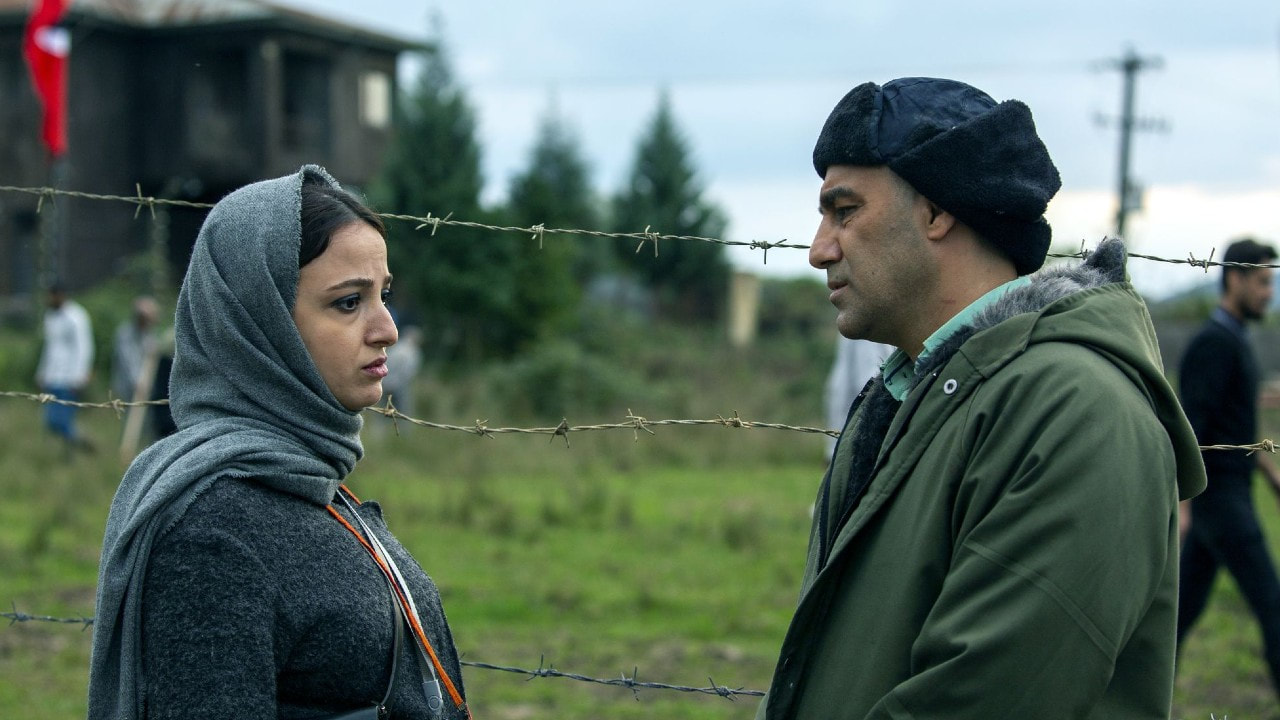 "History doesn't repeat itself, but it often rhymes". This is the quote that opens Houman Seyyedi's World War III. Screening as part of the 2022 Venice International Film Festival, World War III opens on a homeless man named Shakib (Mohsen Tanabande) who befriended a deaf woman. Shakib is innocent enough as he wanders through life taking odd jobs here and there, but finds himself literally chosen from a crowd of extras as he works on a movie set that is creating a feature on World War II. Originally cast as a prisoner, Shakib is asked to step up to the role of Adolf Hitler after the actor initially playing the role suffers a medical emergency. Shakib is hesitant, but eventually accepts and quickly finds his life completely turned upside down. Things only grow more complex for Shakib as this woman he befriended makes her way to set to beg for help from Shakib's newly enlarged income and he has to hide her.

The premise of World War III is, at heart, something that has been seen before. Seeing someone from the bottom tier of the social hierarchy all of a sudden get catapulted to near the top is a story that has defined cinema since the age of silent film. In this regard, the film proves its worth largely due to the performance of Tanabande. Beyond wholesome with a realistic temper that never feels as if it betrays the character or the purpose he serves, Shakib is instantly likable and is brought to life by a complex and crafted performance. His dynamics with those both above and below his position feel thoughtful and the dynamics involving the power his character both wields and lacks make an intriguing battleground for the film's drama.

However, this side of the film remains nothing new. In order to give the film another layer, the World War II side of the film gets brought in. Attempting to play into irony, the film features rather on-the-nose visuals like a guy in a Hitler costume trying to hide a woman underneath the floorboards. This is the more complex identity of the film. On one hand, this is an incredibly clever use of established iconography to tell a more modern message based on the backbone of the emotions found within history. On the other hand, it can be seen as an exploitation of the pain suffered in World War II and could be seen as distasteful usage of this horrifying event. Audiences will decide which side of the coin they find themselves looking at but the truth feels somewhere in the middle. While the thought is there and the film has an important voice, it does stand as undeniably bold and surely understands the more controversial takes that its ideas could generate. It is a moral debate being found more and more in cinema as a similar question was brought into place for Ari Folman's Where Is Anne Frank. This at least doesn't actually try to embody a character from the Holocaust.

What is rather clear is that the film struggles with length. At 117-minutes, the film feels really drawn out; especially in the first half. As the film slowly sets up this world and characters, the project offers very little for audiences to engage with and many will be checked out long before the deeper message really ever gets developed. Luckily the technical side of the film is stronger. The production design creates a strong playground of sets that begin to take an identity of their own. Obviously enhanced due to the nature of the iconography being depicted, from the cold showers to the muddy trenches, this is a set that breathes tension and uneasiness. The cinematography from Payman Shadmanfar and the score from Bamdad Afshar is also both massive highlights.

World War III is a bold feature that works on a fundamental level but can struggle when trying to evolve its own narrative. Using World War II iconography to paint a modern image is a risky move that overall pay off even if there are a few points of moral uneasiness. Mohsen Tanabande is wonderful and overall the project proves the worth of Houman Seyyedi even if it won't be known as his magnum opus.
Become a Patron!