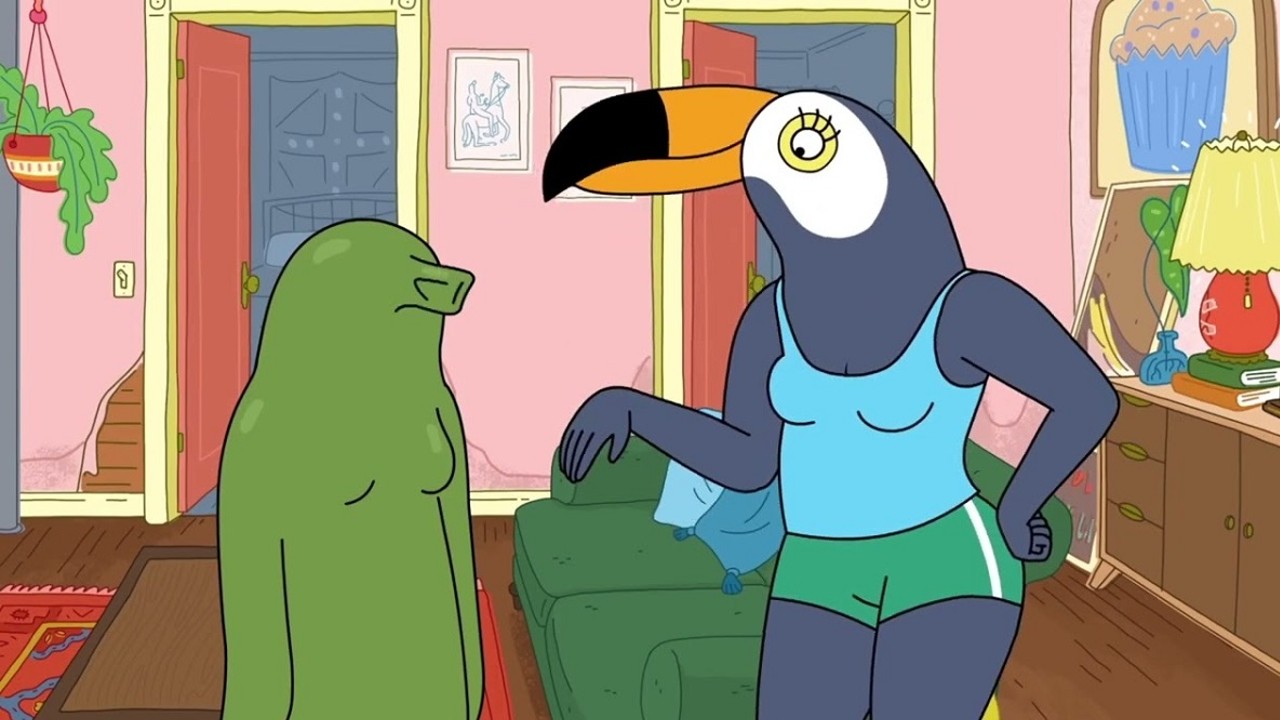 With the all-time great Netflix series Bojack Horseman coming to an end, there was a clear void in the world of adult animation that looked like it might be filled by Lisa Hanawalt who worked on Bojack Horseman and now found her own series Tuca & Bertie. Following the two titular main characters who are birds in the fantastical Birdtown, the show seemed to bring a new spin to the Bojack Horseman backbone that showed promise despite a messy first season at Netflix. Tragically, Netflix cut the show leaving the future of the project up in the air until Adult Swim stepped in to create another season of the show. Whether it was because of this change or simply the creators finding their groove, the second season of the show was magnificent standing as one of the most powerful and important shows to come out in the last decade. After a year of waiting, the show is back with the third season and the magic continues to shine.

In a similar vein to Bojack Horseman, the ability of Tuca & Bertie to balance the absurdest comedy with haunting grounded depth is stunning. Bringing attention to emotions like trauma, alcoholism, therapy, and more under a distinctly female lens, Tuca & Bertie is a needed voice. So many of these issues are traditionally swept under the rug but the series handles these topics with a maturity that respects and gives space to their complex nature. While the first two seasons largely set up these conversations and introduced the relationships the characters have with them, the show is smart to find evolution in these narratives to unearth deeper and deeper aspects of these journeys.

Throughout this season, Tuca (Tiffany Haddish) starts a romantic relationship with a fig tree named Figgy (Matthew Rhys) who likes to drink and sometimes suffers from not being able to control his drinking. Tuca doesn't want to be too imposing on her boyfriend considering she is a recovered alcoholic, but things are tough for her as all she wants is the best for Figgy. Bertie (Ali Wong) also has her fair share of problems as she is forced to confront difficult relationships from her past while also starting to feel some strain in her relationship with Speckle (Steven Yeun) who is starting to fall down a depressive cycle caused by frustrations he faces at work. These stories weave in and out of the season's narrative and each offers a worthwhile expression of emotion that accepts its complex nature. Tuca & Bertie continues to explore these dramas in a way unlike any other show currently airing and the idea that some young woman might see their struggles finally represented in media is all one needs to understand the value of the show's voice.

These deeper and darker emotions are scattered across a season that has plenty of well-crafted humor and fun. Absurdest without ever feeling too random, the show is hilarious with some of the best-written comedies seen on tv. Both Tuca and Bertie continue to have wonderful chemistry not just with each other but with the world around them, leading to a wonderful sense of personality and charisma. This is only backed up by the performances which all around continue to be flawless. Haddish, Wong, and  Yeun all have fully found their grooves and have crafted strong personas that feel iconic. Newcomer Rhys is also a delight with his soothing quietness being a fun area of juxtaposition compared to those around him. Make no mistake that while these performances are fun, they can also be heartbreaking and the acting is yet another area of the show where the craft is shockingly strong.

The animation also continues to be a delight. Not just is the actual animation style itself totally unique, but the use of color is magical. The show has slowly developed an eye-popping pallet that is fully realized throughout the third season. The show has a gushing aesthetic that feels innovative and fresh. Continually within the world of animation, it is being proven that beyond anything else, having a unique eye and style is what creates memorable results. While so many projects, both tv and feature, struggle with this concept, Tuca & Bertie has mastered it.

The flaws of the season feel largely in line with the faults of the previous two seasons. The structure of the show can ask audiences to wait quite a while to get a conclusion or development to one of the deeper plots which can feel somewhat frustrating, especially as the show releases once a week. Choices such as following up Tuca shockingly finding Figgy passed out drunk only with random quirky comedy rather than real conversation surrounding the event can feel disappointing, though at least the season does traditionally return to these open wounds by the end. This season also feels naturally like a step down for the show as the consistent perfection of Season 2 is not quite met. While still wildly strong, the show doesn't quite find the same highs which can be noticeable. These are all really minor however and at no point did the show feel like it was even close to being ruined by any of these faults.

It is incredibly joyful to report that Tuca & Bertie continues to be one of the most important and well-made shows currently on air. Striking with both a light heart and worthy venom, the show is a needed modern female expression that has the realistic completion to speak to human truths so often overlooked. This is the type of content that can change and save lives and make humans going through normal human emotions feel less alone. This should be the standard for modern media, but sadly the show stands tall as a lone peak in a quickly falling mountain range.