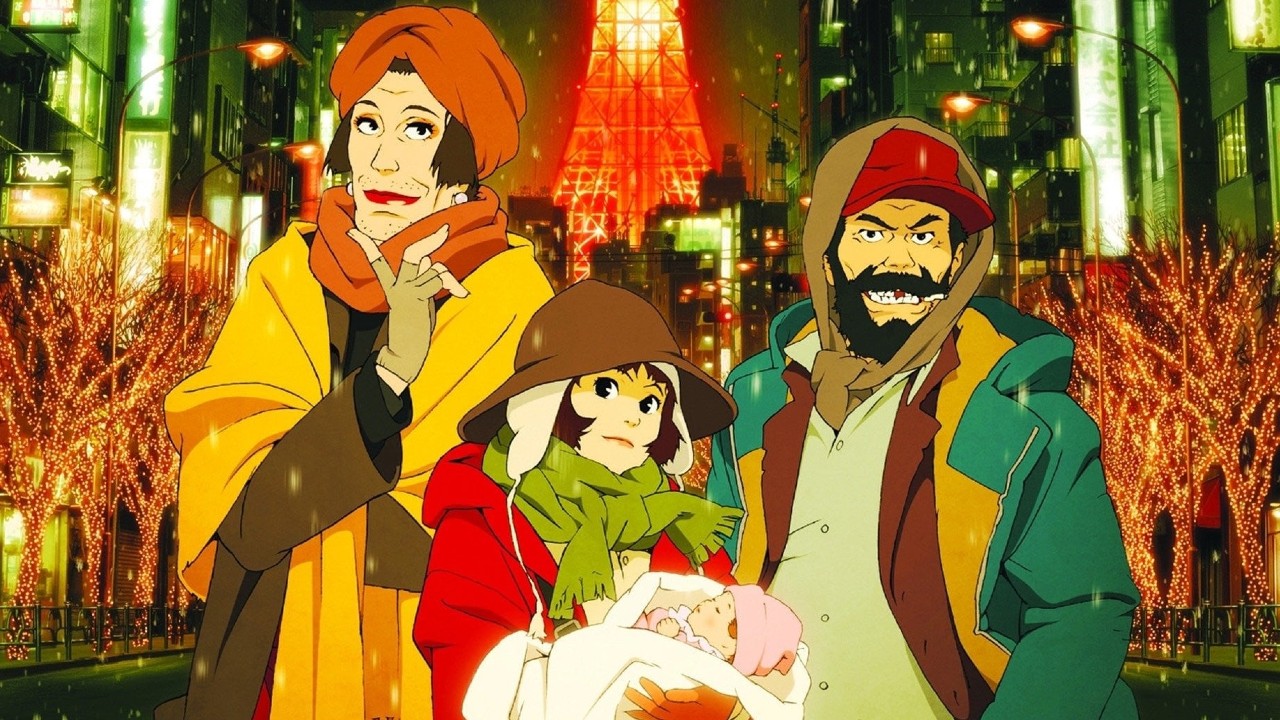 Being a largely American export, one of the most interesting traits of the modern Christmas holiday is seeing how the tradition has spread across the globe. The capitalization of family love has crossed oceans and borders with countries and people all across the globe coming together in their own unique ways to celebrate both the morals and spending of the holiday season. One of these countries is Japan. Coming as a relativity new tradition to the culture lasting only a few decades in history, Japan offers a unique perspective on the purpose and soul of the holiday. Naturally, this perspective on the morals of Christmas has bled into media with legendary anime filmmaker Satoshi Kon's holiday feature Tokyo Godfathers cementing its place as one of the stronger holiday texts for many individuals across the globe.

Rather than glorifying the holiday or embracing a traditional point of view, Tokyo Godfathers sees an unlikely chosen family of three homeless people find a baby on the Christmas Eve streets of Tokyo and travel the city trying to find its mother. While helped by a series of Christmas miracles, these three not just expose the shortcomings of the society around them but also the power of love and connection between chosen families in a way that speaks to the deeper purpose of Christmas altogether. While clearly the most conventional of Kon's features, Tokyo Godfathers still embraces the magic and dreams of modern life and while not perfect, is another clear success from the filmmaker.

Being a well-regarded Christmas text, the first thing that might stand out to some from Tokyo Godfathers is its lack of traditional holiday iconography. Tokyo Godfathers doesn't take place in some nice clean apartment or feature rich families coming together through petty drama in the name of love, instead it takes place in the grimy streets and parks of Tokyo. Undeniably however, the film carries the soul of a Christmas feature that speaks to the true identity of the genre altogether. The heart of Tokyo Godfathers is endless with characters feeling pure and honest. Even in scenes such as one of the main characters sharing a bottle of alcohol with a dying old man in a dirty tent tucked away in a cold and snowy Tokyo park, there is a light and warmth to the feature. Tokyo Godfathers speaks confidently saying that love and connection is found everywhere there is honesty and good intentions. One doesn't need some grand storyline or perfect relationship to feel these emotions, they just need each other. The love felt between the film's main characters is undeniable and feels authentic. Their dynamics are not clean or easy, they have fights and make fun of each other but their chemistry never makes these details awkward. They feel real as does both the melancholy and magic of the holiday around them.

Unlike some other additions to the modern holiday genre, Tokyo Godfathers also has a clear purpose. Kon is using this charming holiday story to find a much larger reflection on the society around him. From the failures of healthcare to the lack of compassion felt within society for those struggling, it is hard not to feel a weight and purpose within the feature which is only enhanced when put into juxtaposition with the normal clean identity of the Christmas genre. Even if these characters on the inside match everything one would want for a perfect narrative and ending, they are denied one due to the shortcomings of modern capitalist society.

While these elements stand as a clear success for the film, it is important to recognize its shortcomings also with perhaps the largest elephant in the room being Hana (Yoshiaki Umegaki). While both Kon and early 2000's society both have a rocky history with trans representation, the character of Hana feels particularly confusing. At first, it is easy to discredit the film's usage of Hana all together. Characters call her slurs and misgender her often with Kon disappointingly using her gender identity as a joke far too often. It is uncomfortable and gross but as the film progresses, a love for Hana appears. Kon gives Hana an authentic soul that is impossible not to empathize with. Scenes such as Hana describing her desire to be a mother come off as moving and poignant with Kon giving the character both the space and time to connect with the audience and for her desire and pain to come out authentically. While on the outside it is clear that the character of Hana is far from perfect, on the inside there is a love and compassion rarely found within film that truly feels special when viewing the character in the larger context of trans representation. While this doesn't negate the jokes made at her expense, it does make the morality of her inclusion and usage all the more complex.

From a screenplay perspective, it also feels like Tokyo Godfathers is Kon at his overall weakest. While Kon has a long history of embracing strange elements of magic and fantasy within his films, the miracles found throughout Tokyo Godfathers feels rather unsatisfying and out of place. Characters will make a decision but get saved from facing consequences through incredibly unrealistic luck. While some might point this out as being ok considering the film's place in the already unrealistic holiday genre, it makes the film feel unsatisfying at times and just feels out of place for what otherwise is an incredibly grounded story. The movie also feels rushed. There are tons of characters and relationships the film wants to embrace but at only 93-minutes long, it simply doesn't have time for everything. It is the one film within Kon's filmography to feel mismanaged when it comes to direction and pace which is sad considering the strength Kon has shown elsewhere for his control over his features.

While perhaps unorthodox both for the genre it belongs to and the filmmaker it comes from, there is no denying that overall Tokyo Godfathers is a success. Bringing a unique perspective and outlook on the modern holiday season with a heavy helping of love and purpose, Tokyo Godfathers might not be perfect but ultimately achieves what it sets out to and offers a fresh addition to the normal holiday viewing schedule.