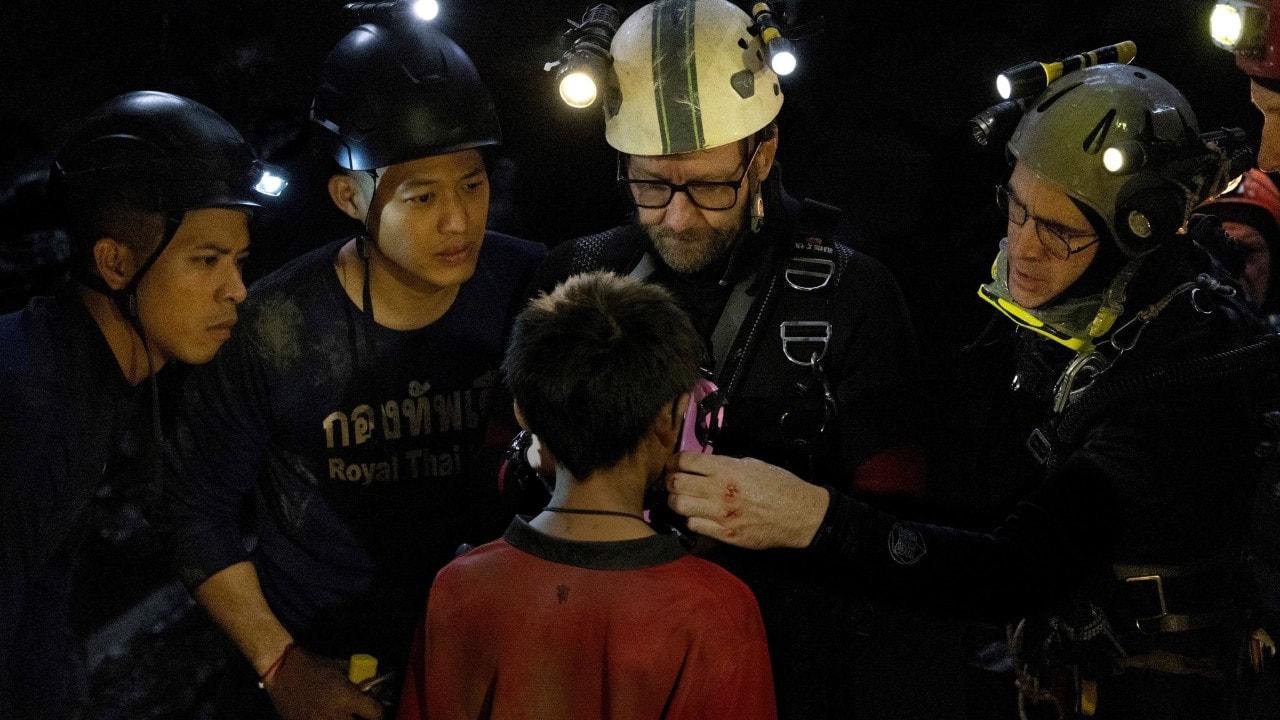 Every few years, there is a handful of news stories that take the world by storm and have individuals across the world on the edge of their seats. One of the most recent examples of this type of story comes from 2018 when a youth soccer team and their coach got trapped inside the Tham Luang Nang Non cave in Thailand once the entrance to the cave flooded due to rapid rainfall. For weeks the team remained trapped as officials tried to find a way to get them out safely leading to a daring rescue effort that involved knocking the kids out with anesthesia to allow divers to more easily maneuver the kids through the complex dive required to get to the outside. Naturally, this story would find its way onto the big screen with the first major narrative outing being that of Ron Howard's Thirteen Lives.

Once again tackling the adaptation of a harrowing true story, Howard builds Thirteen Lives with the clear focus being on the spectacle of the events taking place. Rather than focusing on character or arcs, Thirteen Lives is rather grounded and focused on the specific efforts taking place to get these kids and their coach to safety. A holistic view is taken to look at the situation with the focus being spread between multiple different parties including the divers, the government officials, the families, and the groups trying to stop the water from further flooding into the cave. This effort creates a final product that feels informative and overall strong when it comes to capturing the overall situation. Especially for those who do not already know the specifics of this story, and especially those who haven't seen Elizabeth Chai Vasarhelyi and Jimmy Chin's The Rescue, Thirteen Lives is sure to be a thrilling and shocking feature that takes the time to show just how difficult and dangerous this situation was.

The film takes its time to build and give space to the threats encountered by every individual working on this rescue. From a diver drowning due to the intensity of the dive required for the rescue to the weight of responsibility put on both the officials and divers executing the plan, the film is rather fantastic at building the sense of weight. Even the sheer presence of rain carries a haunting anxiety, signaling a success from the filmmakers behind the project. Howard is confident and calculated as is the editing by James D. Wilcox and the cinematography from Sayombhu Mukdeeprom. The use of music and sound design is also wildly effective. While the actual score from Benjamin Wallfisch is a positive standout, the film knows just when to turn off the music and let the raw quietness stand tall. The sound design of the underwater scenes also feels inspired and helps immerse audiences, especially in a theatrical setting.

These elements build a perfectly suitable and technically competent film that will only suffer greatly to those who already know the story being told. While the tense filmmaking is sure to still work on at least some level, the story is undeniably basic and hollow when it comes to character arcs and story. For those already aware of the spectacle that was this rescue, there is very little within the film to hook audiences. The acting is all solid with those like Colin Farrell, Viggo Mortensen, Joel Edgerton, and Vithaya Pansringarm delivering strong work, but their characters lack almost any personality. The actual version of the story being told is also remarkably basic with some of the story's more absurd and wild sides, such as the involvement of Elon Musk, being left out completely. This grows to be a major problem when the film decided to take on a whopping 147-minute runtime.

While a more focused 100-minute edit might be able to escape with the power of the filmmaking involved, for this longer runtime to be as basic as it is leaves audiences already aware of the story to sit for long periods of time simply watching a story they already know play out. There are large segments that come off as boring and taxing in the worst of ways. This indulgence in runtime is nothing new for Howard's career and sadly has become a staple of his true story adaptations.

To determine if one should take the time to watch Thirteen Lives is entirely reliant on the understanding they already possess of this rescue. For those who are unaware of what efforts were actually taken, this is going to be a thrilling spectacle that shocks. For those who are aware, this is a rather passable cinematic outing that easily can be skipped. What is clear is that this is a film that deserves to be seen on the big screen and if one is able to see it in a theater, that is much preferred over its Prime Video release.