the many adventures of 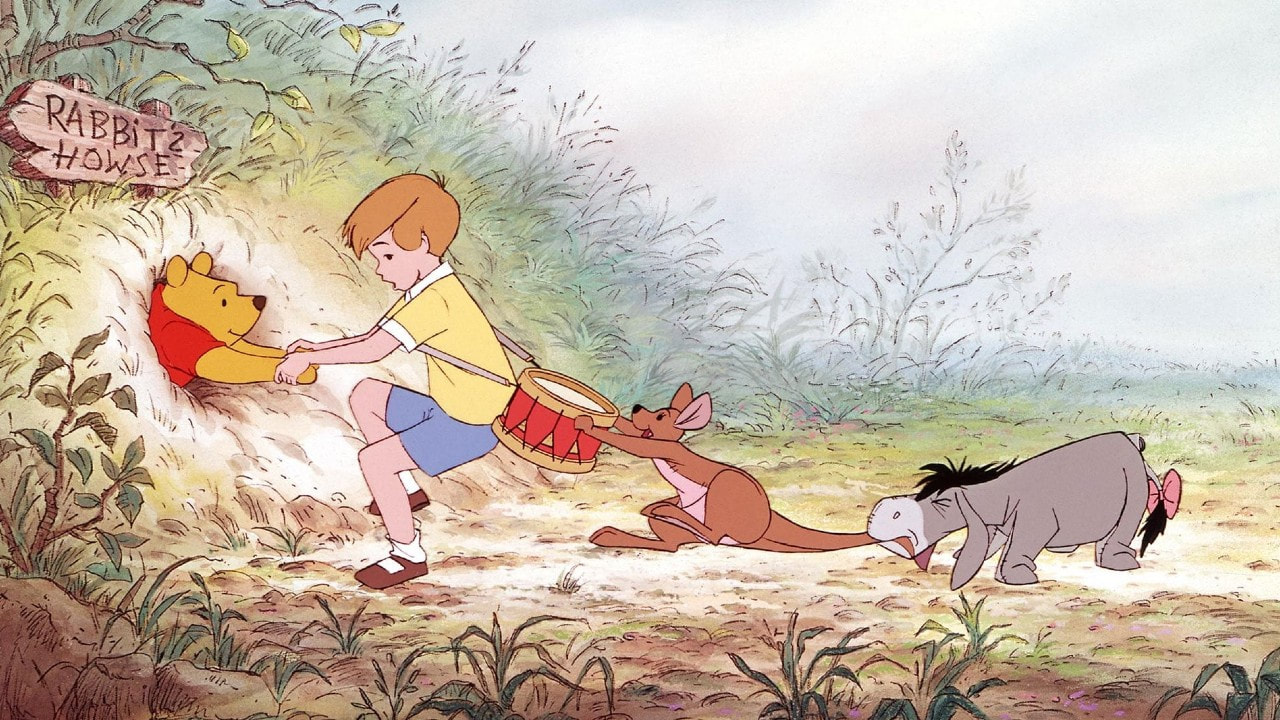 When it comes to Disney, there are few features as sweet and innocent as The Many Adventures of Winnie the Pooh. Based on the titular A. A. Milne character, The Many Adventures of Winnie the Pooh is one of the more unique Disney features due to the lack of real narrative or direction. Rather than any real compelling drama or plot, the film simply follows the characters of the Hundred Acre Wood with specifically four different segments being stitched together through the framing of a children's book. While on paper it might be easy to assume that the film would be one of the weaker Disney efforts, it ends up being one of the best.

Before the content of the feature is discussed, it is key to spend time on the presentation of the film. A movie being framed as a storybook is nothing new, yet no film either before or after The Many Adventures of Winnie the Pooh has used this presentation as strongly as this. Rather than just introducing a narrator, in this case voiced by Sebastian Cabot, and moving the story along; the film consistently goes back to this framing and turns it into a true backbone of the story. Segments are allowed to be introduced and ended by the literal act of pages turning with the narrator often finding himself talking to the characters in between who seem just along for the ride as the audience. Even the physical book itself is used as characters are jumping between pages and interacting with physical words on the page. This is genius and inspired with it being shocking how few films actually managed to copy this idea.

This is also key as it helps keep the film moving and elevates the moments between the more casual stories. The majority of the film is actually repurposed animated shorts never intended to carry a theatrical feature. Most plots are light on conflict and drama which threatens to cause a rather boring viewing experience. The film works wonderfully however with the characters and world being so charming that one never actually is bothered by the lack of complexity. Taking one back to the innocence of childhood, the film manages to entertain and find emotional reactions even to lackluster events such as Pooh getting stuck in a tunnel or a windstorm hitting the forest.

This success within these shorts can be attributed to a few things. There is no denying that the animation is flawless with the storybook visuals bringing these characters and this world to life with the perfect amount of charm. The characters themselves are also simply lovely to spend time with. Due to both the writing and performance behind each character, everyone feels unique and well rounded with not a single character falling into simply being one-note or stale. These characters are treated as real characters with flaws and complexities, even if these tend to be rather minor. So many protagonists throughout Disney history have fallen to feeling bland because of their lack of real imperfections, yet even Pooh himself manages to make mistakes and have his downfalls that make him feel strangely human and only plays into the innocence of the character. This is also achieved through the iconic performance given to him by Sterling Holloway with what has to be seen as one of the strongest voiceover performances ever seen in animation.

This innocence is one of the reasons the final few minutes of the film hits how it does. For a film that is overwhelmingly simple, the final short of the film carries a wicked venom as Christoper Robin says goodbye to Pooh and the audience is left to confront their own childhood spirit which is often pushed to the back due to the cruel process of growing up. Even if the characters hold and innocent ignorance towards this process, the audience is not and the emotions that come from the small and innocent conversation are undeniably heartbreaking. This is, at the core, why Winnie the Pooh works so well. It speaks to childhood and the magic of the time without ever reducing itself to speak only to that demographic. There is a purity that is rarely found in media, yet when it is found in works such as Winnie the Pooh or Mister Rogers' Neighborhood, the results are magical.

The Many Adventures of Winnie the Pooh should not be as special as it is. The film is undoubtedly simple and digestible for the youngest of audiences, yet the genius of the film is how well it also plays to the older demographics. Completely pure with a genuine sense of inspiration and craft, it is impossible not to fall in love with the film on every viewing and see it truly as one of Disney's masterpieces!
Become a Patron!