One of the first major moves in the world of cinema regarding the COVID-19 pandemic was the switch from a theatrical to Netflix release for Michael Showalter's The Lovebirds. Originally supposed to debut at the 2020 SXSW film festival, The Lovebirds seemed to possibly be one of the early hits of the year following in suit of Michael Showalter's previous two films Hello, My Name Is Doris and The Big Sick reuniting the director with Kumail Nanjiani alongside Issa Rae in a romantic comedy which clearly is a genre Showalter has found success in before. It is these previous successes and the natural expectation to form from them that is one of the leading factors The Lovebirds feels like such a letdown. It is a film that feels like it was always destined for a service like Netflix ending up as a bland and average romantic comedy that will fail to be memorable even in a month's time.

Most of this is because of the contrived plot that the film takes on. Instead of giving a romantic comedy looking at modern relationships in a grounded and realistic setting, the film takes on an entire criminal mystery as the two main characters Jibran (Kumail Nanjiani) and Leilani (Issa Rae) end up being tied to a murder and has to solve the crime to prove their innocence before the cops can arrest them. Not only does this plot majority distract the film from its deeper points but it also is far from fresh or exciting. There have been countless other films to have premises like this taking any excitement or engagement that the story would have away. At no point did this plot and mystery feel engaging or memorable as it lazily went through the exact motions you would expect from reading the premise of the film. At least for some other comedies like Stuber, the plot made more sense considering the characters involved but for The Lovebirds it feels way overly contrived. 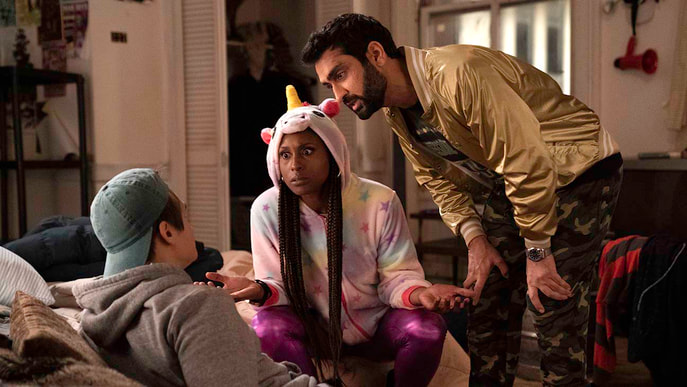 Luckily, where the films fails to be engaging it at least is far from painful. This mainly comes from the performances from Kumail Nanjiani and Issa Rae. It should come as no surprise that both actors are incredibly charismatic and when they are allowed to riff and play around are able to create at least an enjoyable feeling for the film even if at no point the film is laugh out loud funny. Even though plenty of the jokes set up and crafted fail to land, these two give their bests and make the film a perfectly fine watching experience even if it is forgettable. The other main reason that the film never feels overly hard to sit through is the runtime. Coming in at only 86-minutes, The Lovebirds really doesn't even have the time to drag or lose focus too much. As mentioned, where overall the film chooses to focus on bad jokes and its contrived story, there is at least some other messages the film starts to explore. From the impact social media has on expectations in relationships to how relationships communicate, even though the film never gives these topics the proper attention their presence is still there.

The Loverbirds might not be the next romantic comedy classic but it also is far from being one of the years worst. It is a perfectly competent film that is enjoyable enough to be watchable but at the same time is completely unremarkable and unmemorable in really any way. For those looking for something to throw on in the background then The Lovebirds will work perfectly fine; but for those actually wanting to sit down and focus on a film there are so many better options on Netflix alone.