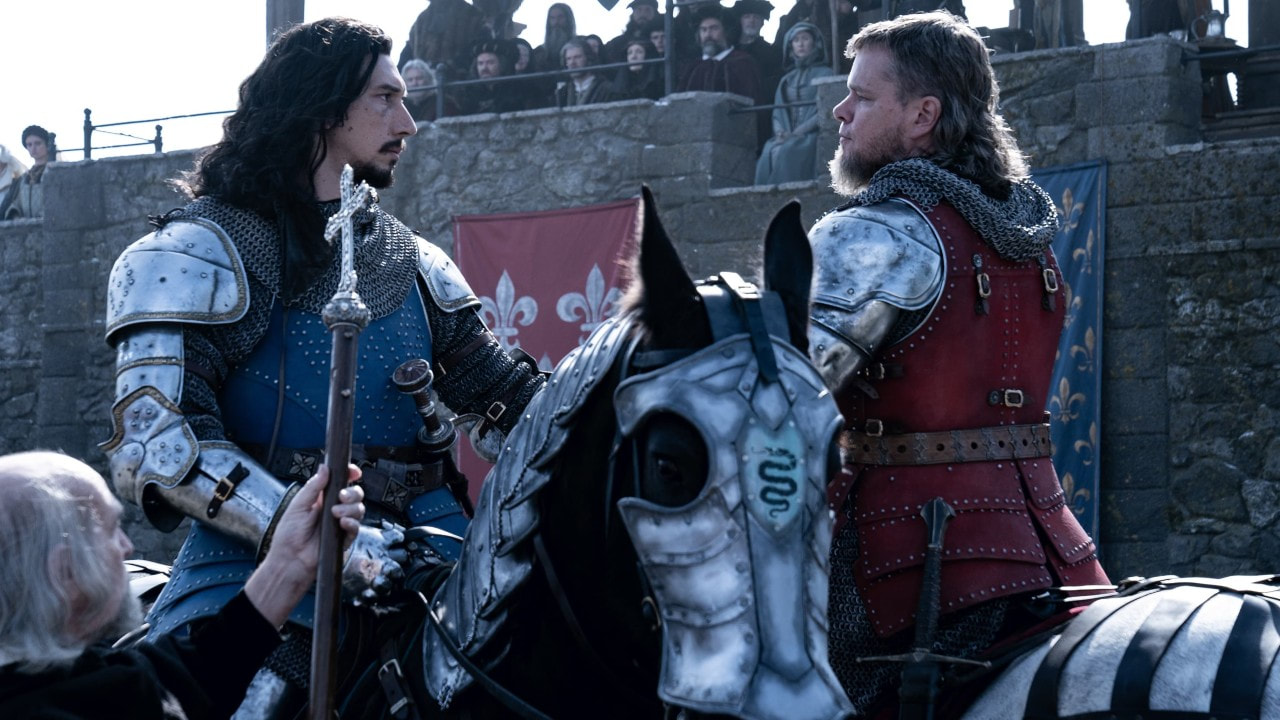 At the ripe age of 83 at the time of writing this review, one might expect the legendary Ridley Scott to be slowing down with his creative output but instead, it seems the filmmaker is speeding up with 2 major releases coming out just months apart from each other. The first of these takes Scott back to medieval times in The Last Duel. Telling the true story of a friendship turned rivalry between Jean de Carrouges (Matt Damon) and Jacques Le Gris (Adam Driver) that ended in a duel to the death once Jacques Le Gris was accused of raping Jean de Carrouges's wife Marguerite de Carrouges (Jodie Comer). Telling the same story 3-times - once for each of the main characters giving light to their perspective of events - The Last Duel is a poignant and haunting look at rape culture and truth that will leave audiences floored with emotion.

One cannot overlook the importance of the performances within The Last Duel. While many medieval epics get swept up in their size and action, The Last Duel is a more personal and character-driven drama with limited sequences of action outside of its third act duel. Its moments of tension and emotion are often quieter and more emotionally raw which relies on the performances to give the film the weight it demands. Perhaps seeming the most out of place on paper of the main group would be Matt Damon who is facing somewhat of a career renaissance. between this and Stillwater. It would be false to say that Damon is bad in the film but clearly he does feel somewhat out of place especially early on. His level of inner intensity takes a while to get on the same page with the more poetic medieval dialogue he is given and it doesn't help that his character is one that gets recontextualized. First introduced as the hero of the story and then given a more harsh complexity as the runtime plays, Damon has to hide parts of his character which is not an easy task and undeniably complicates what is asked of him. It also doesn't help that everyone around him is genuinely quite incredible causing his "good" performance to stand out in a negative sense.

It should come as no surprise that Adam Driver is fantastic within the film. Driver has proved himself as a layered yet dastardly villain in the past and continues to show his power here. Driver isn't outright unlikeable but with the drop of a dime can turn into a monstrous mess of toxic masculinity and self-entitlement that lashes out with a cold and calculated venom. The audience naturally grows to hate him in the best of ways with Driver fully embracing this turn. In supporting roles, Ben Affleck is almost unrecognizable in his disturbingly charismatic portrayal of Count Pierre d'Alençon while Harriet Walter gives possibly one of the most haunting moments of the film overall in a single line of dialogue towards the end that intensifies the weight and terror of the film to a far deeper level.

While these names do incredibly impress, there is no denying that The Last Duel belongs to Jodie Comer and Comer alone. Acting in a more supporting role for the first two thirds of the film, Comer rises undeniably in the last third of the film giving an empathetic and terrifying portrayal of pain and suffering that will be too much for some audience members. Her charisma and liveliness rises her to be able to challenge the toxicity of her male counterparts only for her to be beaten down by an unfair and unjust system once she comes out with her truth. Ultimately, Comer becomes forcibly powerless and seeing her emotional journey throughout the film gives a meaning and understanding to the horrific complexities of the #MeToo movement and the social ramifications of telling the truth that will leave many with a new perspective on the matter as a whole. It cannot be stated just how fantastic Comer is within the film and the fact that it remains questionable if she would gain awards recognition for this performance is almost disgusting and is incredibly telling of the current state of the awards season.

These characters and their personal journeys gives the audience an incredible amount of content to chew on thematically turning The Last Duel into one of the most important films of the year. Despite its medieval setting, The Last Duel speaks confidently to the modern climate when it comes to rape culture and toxic masculinity. It is impossible not to feel the relevance as one hears the conversations within the film play out and come to a haunting realization that even if specifics have changed, society ultimately has not properly dealt with the issues plaguing itself from over 600 years ago. Faces have changed and terminology has developed, but the core issues and venom surrounding this topic remain the same.

While this thematic weight and personal drama of The Last Duel might elevate the project, it doesn't negate the film's bigger successes as a period piece. The production design within the film is stunning with grand castles and a true sense of world-building being felt in every piece of the film's visual persona. The costume design and makeup work is also wildly impressive. While none of these elements might feel revolutionary considering how many times this world has been brought to life on screen, they are clearly being accomplished at the highest possible level they could be. The direction from Scott is clear and confident proving that he still is a master of filmmaking with the action especially being a true standout. The duel at the end of the film genuinely is one of the most intense moments ever seen in cinema. Especially for those who don't know what result is going to come from the brawl, the film does a masterful job at building the stakes for the encounter and drawing the audience to the edge of their seats with multiple twists and turns within the fight. It is incredibly well choreographed and shot with both a physicality and emotion to every scene.

When it comes to the negatives within The Last Duel, the list is incredibly short. The one thing that really comes to mind is that some scenes towards the middle of the film can feel a bit tedious as the same story is told again from a different perspective but this is far from enough to ruin the film. Overall, The Last Duel is a needed feature of skill and emotion that kicks the 2021-2022 awards season off with a bang. Ridley Scott is still at the top of his game and the film gives Comer the iconic and impressive role needed to define a career. Every piece of the film is operating at an incredibly high level and after so many mediocre features, it genuinely feels like a breath of fresh air to go to a cinema and see a new release to the level and gravitas of The Last Duel.