Set in 1978 Hell's Kitchen, The Kitchen follows the wives of three Irish Mob members who after their husbands get sent to jail by the FBI struggle to survive. There is little work for these inexperienced mothers and the mob is not giving them nearly enough to survive. With little to no other option, they see opportunity and grab it as they start taking clients of the Mob for themselves offering services and protection. Slowly these women find their footing and take more and more power though not everyone is so welcome or happy about what they are doing. This was a film I was strangely interested in mainly from an acting perspective. Last year Melissa McCarthy proved how talented she was in more dramatic roles with her performance as Lee Israel in the film Can You Ever Forgive Me? and I was really excited to see her take on another serious role. Elisabeth Moss is also a proven actor who I love to see in just about anything but the one I was most intrigued to see was Tiffany Haddish, where she is one of my favorite comedic actors I had never seen her in a role like this and I was beyond curious to see how she would handle it. I was also excited to see Andrea Berloff make her directorial debut after having quite a bit of success with screenwriting with films like World Trade Center and Straight Outta Compton. I had high hopes for this film as it seemed to have all the elements to be a surprise hit of the summer, unfortunately, it didn't come close to reaching those highs. 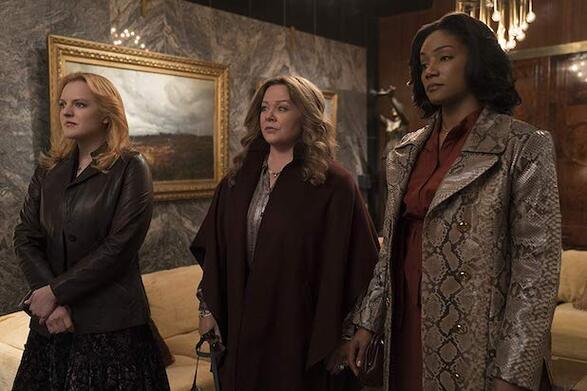 Where this film is far from the worst movie I have seen this year it also has no element that stands out as something special. As far as positives with the movie I think the acting overall works. As I mentioned this was the thing I was most interested in and as expected there are quite a few good performances here. Once again Melissa McCarthy is really solid giving a performance that comes across with some solid emotion as she only wants to provide for her family. Domhnall Gleeson has a smaller role in the film but he is also really good and has some great chemistry with Elisabeth Moss who is easily the standout of the film for me. It helps that she easily has the best character in the film but her performance is powerful and emotional. Like I said though it really helps that she is given stuff to actually do with her character considering overall that is one of my biggest faults with the movie. The characters are bland and forgettable with the film never giving them the depth needed to become interesting outside of Moss's character. This is one of the biggest reasons the movie failed to grab me and interest me. Right from the start, they give us nothing but basic and uninteresting reasons to invest in this story and the characters come off as bland and one dimensional. Other than Elizabeth Moss's character finding power after years of abuse there are no interesting arcs or motivations for any of these characters. On the topic of acting, I will say that the one disappointment from a performance standpoint is Tiffany Haddish. For some reason, she always felt awkward and out of place with none of her lines really delivering. It easily could be that she doesn't have much experience with this type of role but she just didn't click with this film.​ 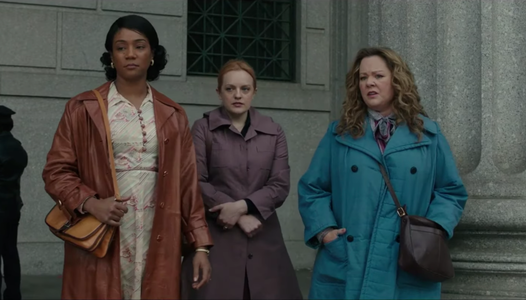 I will say that this movie does a decent job with building its world, taking place in 1978 Hell's Kitchen this film not only does a good job creating this time period visually but also the deeper feeling that comes with it. Now I cannot speak to the authenticity of this film's portrayal of 1978 Hell's Kitchen but the film does a great job making it feel dangerous and crazy. There are so much casual death and murder in this film and it feels like you are in the wild west at times, no one is safe at any time and that was effective for the story they are wanting to tell. These women are going out of their comfort zones and you can feel the constant threat of the metaphorical pool they are deciding to swim in. Sure with that, you could say that death and murder became devalued in the movie but for me, the positives outweigh the negatives. The plot itself is also just not that interesting, as I mentioned the characters are really weak but even past that this story is nothing that notable. It is a very standard mobster movie with none of the twists or turns being enough to make it stand out in the long run of the genre.

Overall when I look back at The Kitchen I will definitely not see it as one of the worst films of the year. I don't quite understand how it got a 20% on Rotten Tomatoes as it is nothing really terrible. It is simply rather a very basic film in this genre that does nothing to stand out. If you are a huge fan of mobster movies I think you will like this just fine due to the world-building and acting. Though if you are not a big fan of the genre itself then I can't recommend this film. Overall a disappointing outing for Andrea Berloff that I won't remember come a month.