could you pass the dysfunction: 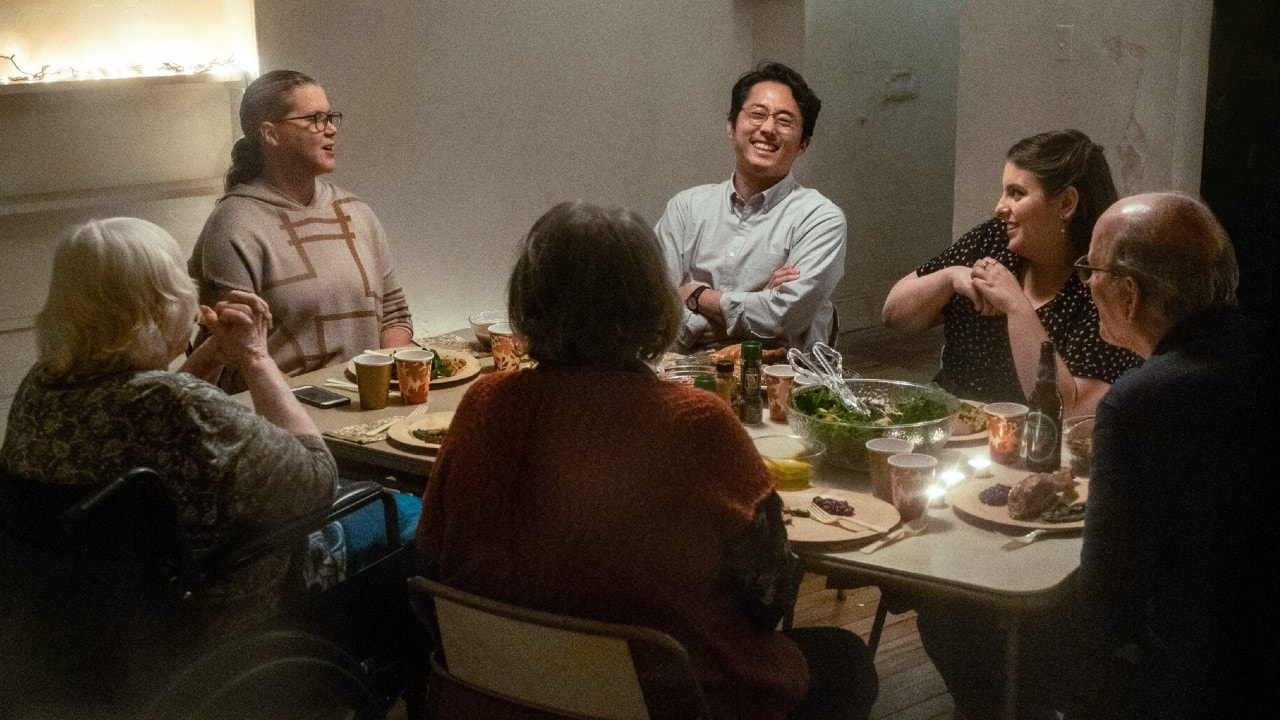 The fall and winter holidays provide a complex game of emotion that contradicts itself with a painful reality. They are built on the backbone of a loving family yet for many, dysfunction ruins this. The world goes through the motions that everything is ok when for many, things are not leading to a painful juxtaposition of reality. Screening as part of the 2021 San Diego International Film Festival, Stephen Karam's The Humans is a rather personable and moving look at this inner dysfunction as a family meets together for Thanksgiving dinner. Young Brigd (Beanie Feldstein) wants to have a simple and nice dinner introducing her family to her new New York apartment and her boyfriend Richard (Steven Yeun). These goals are clearly unachievable as her family broods anger and trauma at the various trials and tribulations they have faced over the last year. From losing jobs to losing loved ones, the family has no choice but to purge their fears and emotions leading to a chaotic night of terror and drama.

The Humans is defined in many ways by the walls it lives in. Exclusively taking place inside of a dilapidating and dark New York apartment, the film broods with a shadowy claustrophobia that offers no release or escape. Family members walk between the handful of rooms coming in and out of shadows as the walls quite literally crumble around them. In many ways, this is a parallel to the family itself. With the walls breaking down between their relationships are clear, the reasons are hidden behind lies and mystery. The Humans slowly brings light to these shadowy corners and forces both audiences and its characters to sit and accept the truth they find themselves in.

In this sense, The Humans is a rather strong character study with the ensemble cast standing out as a particularly large highlight of the project. While those like Richard Jenkins, Amy Schumer and Beanie Feldstein stand strong with their displays of dysfunction and pain, it is beyond clear that the film belongs to Jayne Houdyshell and Jayne Houdyshell alone. If one was to list the top 10 moments of the film, each would belong to Houdyshell who gives a painful and empathetic performance of regret and sorrow. She commands the scene with an authentic sense of love that makes it all the more painful when she has to accept so many realms of pain. From contextualizing the story of her life being written and the limited time she has left on earth to the betrayal of loved ones close to her, her pain is undeniable and easily is the most moving and poignant piece of the film overall with one specific monologue towards the center of the film feeling like one of the best pieces of acting of the year.

This stands out not just because of the power Houdyshell brings to her role but also because of how clouded the film around her gets. The Humans is a confusing film of simply bad execution and strange focus that threatens to completely undercut the film itself. The easiest example of this is the film's focus. The film moves rather slow with a brooding darkness present throughout the entire film leading to an almost horror-film third act that dives into the nightmares of Richard Jenkins's Erik Blake. For what ultimately boils down to an incredibly grounded and human story, the choice to include something larger than life feels clearly mistaken and it really feels as if the film has one of the worst third acts in recent memory.

The other would be the visual style of The Humans. Meant to be a wholesome dynamic that turns dark with dysfunction, the choice to have an obnoxiously dark tone from the very first minute of runtime feels clearly off. It feels rather obvious to have the apartment lit by sunlight only to get darker as both the sun sets and the thematic weight grows darker and every aspect of the film seems to use this logic other than the visuals. The Humans is an incredibly funny film at times with especially its first half being taken up by comedy and fun character dynamics but this feels rather awkward as it is set right from the start in an unnervingly dark and claustrophobic setting. This location easily could have been realized as the runtime goes as it does carry a worthwhile narrative power but the film drops the ball from the start with this.

The Humans is a film that is hard to fully take in. While there are various undeniable good ideas and Jayne Houdyshell truly is stunning, it is a film that lacks the craft or thought to do these ideas or efforts justice. The film severely undercuts itself with no real reason or logic of why being obvious. Buried somewhere within the film's 108-minute runtime there clearly is something of value and purpose but as is, The Humans simply fails to fully excavate this.