a hunt for a rat:

the hole in the fence 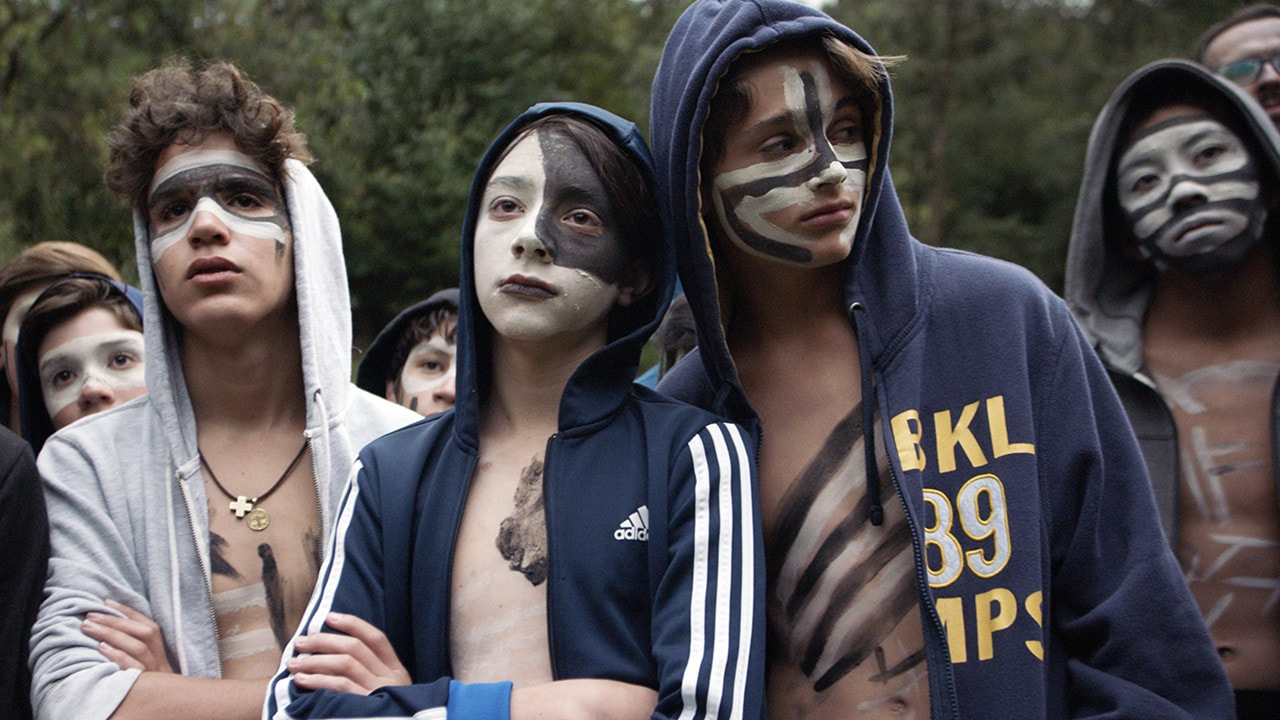 The adolescent mind can be a scary place. In a time of strong emotions, confusing changes, and a lack of control over one's feelings; dangerous and destructive results can occur. Screening as part of the 2021 Venice International Film Festival, The Hole in the Fence comes as the newest addition to a historically rich vein of cinema to explore this. Following the footsteps of projects such as Lord of the Flies and Monos, Joaquín del Paso's The Hole in the Fence sees a group of boys from a prestigious religious private school be taken away to the Mexican countryside where they will be able to learn and grow for a few weeks under the watchful eye of a handful of adults. Tension starts to brew right of the bat however and quickly things run amuck with toxic ideas, entitlement, and violence creeping into every crack of what is supposed to be a holy summer camp.

The Hole in the Fence is one of the rare films that almost perfectly embrace discomfort and anxiety creating a viewing experience that is the opposite of fun but completely worthwhile and needed for the modern moment. The layers and path taken to show how the summer camp goes wrong is vital in the film's storytelling and message. From the opening scene of the students moving into their temporary homes, the chaos is constant. Kids are screaming and running with unlimited energy and angst. There is anger, love, friendship, hatred, and fear within minutes of the film's 100-minute runtime offering a chaotic yet clear canvas for the film when it comes to its examination of the influences these kids face. There is a fire that demands to burn someone and the immediate target is those who are different. With the vast majority of the kids being white and straight, they turn their pitchforks almost immediately to those who look and act differently from them. They have been bred into existence with a straight and white entitlement speaking not just to the modern society they belong to but the need for direction from respectable peers.

This relationship between the children of the film and the adults is where the film finds a brooding horror that slowly creeps onto audiences. In countless ways, the villains of the film are the adults who are not just supposed to be taking care of the kids but also giving them direction. Not just is it established and baked into the film that a handful of the adults are actually harming children but the only solace and direction they offer as leaders is that of further entitlement. The Hole in the Fence among else is a rather damming takedown of religion and the paradoxical nature it holds in modern society. Especially in its efforts to save and clean a dirty world of sin, religion, as portrayed within the film, is on paper meant to serve justice. This however has become ironic as religion has turned into a source of hatred and harm within the modern world. From groups gaining strength from religion in their efforts of racism and homophobia to a widespread exposure of sexual abuse allegations towards priests, it seems like justice needs to be served at all costs unless it is against religious groups themselves.

This dangerous ideology and entitlement further employ the children within the film to commit atrocities towards those they deem as being impure in some way. From a kid who is accused of stealing a cake to a local town who the kids think have kidnapped one of their friends, any means of destruction and harm is justified because it is in the name of justice no matter how dark or morally disgusting that harm is. Not only does this create an evocative and emotionally engaging film but it gives the film a much larger message that transcends the film's runtime and speaks to the modern world on a larger level.

This is further powered by the stunning quality of the film in nearly every sense. The visuals by cinematographer Alfonso Herrera Salcedo are magical yet tense with the film visually bouncing between that of a storybook and horror film. The editing and direction from Paloma López and Joaquín del Paso is also masterfully executed. The film is focused and clean but also understanding of where it needs to breathe and rest. While 100-minutes might not be the shortest runtime, it is the perfect runtime for this story. The acting across the board is also wonderful with many of the young actors giving genuinely layered and complex performances. Not a single child or adult feels out of place with everyone bringing an authentic intensity yet vulnerability that is astonishing. The one piece of the film that feels a bit underwritten is some of the more dark ideas within the relationships between the kids and adults that probably should have been more fleshed out to give these scenes justice, but that really is minor.

It is hard to argue against The Hole in the Fence being anything but one of the best films of the year. The movie is intense, stressful, and gross but also incredibly important and poignant. Every aspect of the film is operating on an incredibly high level with everything delivering. It is clear that this film deserves to be seen and rewarded on a wide scale for its efforts and one can only hope audiences will give it the time of day it deserves.