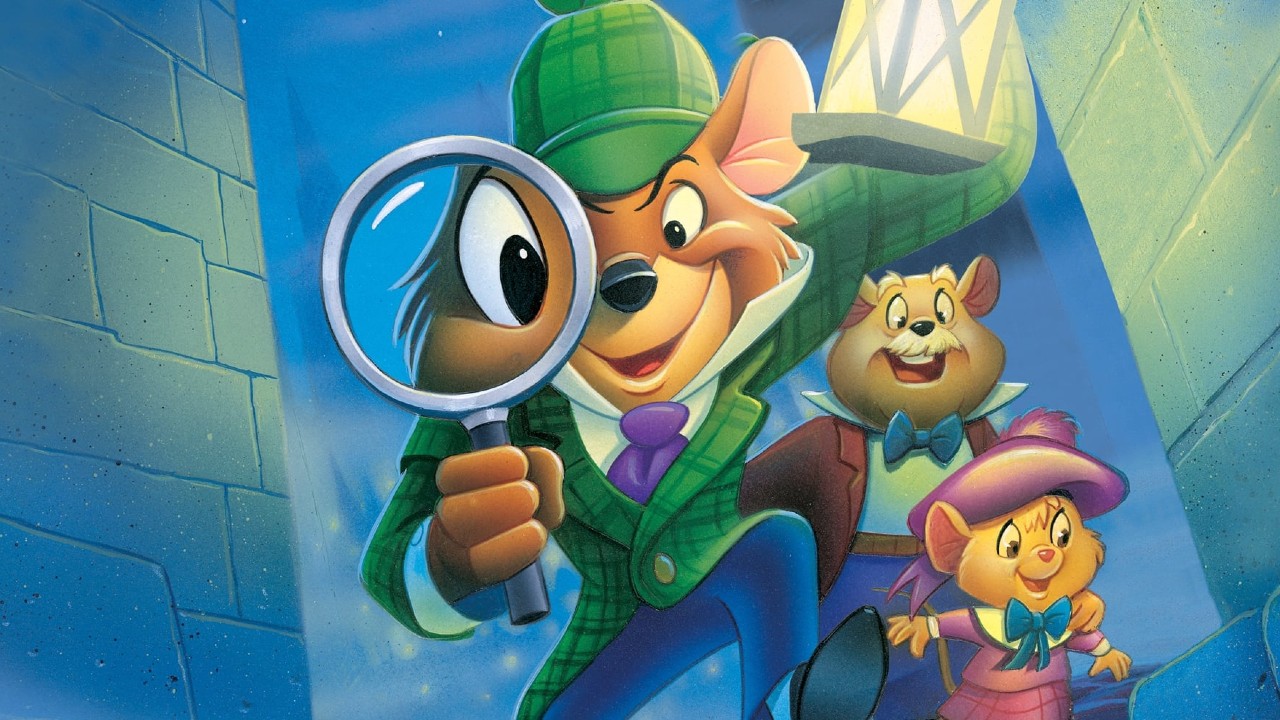 One of the most engaging and entertaining genres of media is that of the classic mystery. Whether the crime is murder or something less lethal, a good mystery can suck the audience in and hold them at the edge of their seats as they work alongside the protagonist to figure out what is happening and how to ultimately save the day. It, of course, would only be a matter of time until Disney tried to embrace the genre with their choice of story being a loose adaptation of Eve Titus's Basil of Baker Street series that features a detective mouse living at 221B Baker Street alongside Sherlock Holmes. The project, taking the name of The Great Mouse Detective, sees Basil voiced by Barrie Ingham and go on an adventure to stop the evil Professor Ratigan (Vincent Price) who seems to want something with a talented toy maker who he kidnaps. While it is undeniable that The Great Mouse Detective has strong elements, it is a shame to see the film end up fumbling its own identity as a detective mystery so badly leading to a rather underwhelming overall feature.

One of the fundamental best parts of the mystery genre is the puzzle it provides. As the lead protagonist puts pieces together to figure out what has happened, the audience follows along creating their own theories and understandings of what the grand reveal will eventually be. This dynamic is unlike most other genres and creates a deeper sense of care and reward for the audience who can feel a sense of accomplishment and intrigue from the process. The Great Mouse Detective fails this game with the audience being given all the answers rather early on while the protagonists have to slowly catch up. While this might allow for more traditional narrative beats, the villain can be established and defined earlier into the film, it feels like a clear miscalculation on what one would want from a story like this. As a result, much the plot feels rather dull as characters figure out what the audience is already aware of and the resulting story is quite simple.

It doesn't help that Basil is a bad protagonist. While there are ways to write cockiness and ego into a main character and have it play well, The Great Mouse Detective struggles with this dynamic. Basil often comes off as unlikeable and simply rude in a way that is not fun to spend time with and certainly isn't a base to make the audience cheer him on. Basil also meets a little girl named Olivia (Susanne Pollatschek) whose father is the mouse kidnapped by Ratigan. To be blunt, Olivia is annoying. Every concern when it comes to a young child who joins an adventure is realized through Olivia. This threatens to ruin the main protagonist group with only Basil's true sidekick, Major Dr. David Q. Dawson (Val Bettin), having an actually enjoyable presence and impact.

This is sad as in opposition, Professor Ratigan is one of the strongest Disney villains. Not only is the performance from Vincent Price devilishly memorable, but there is a real edge to him that is threatening and scary. The Great Mouse Detective is one of the more violent Disney films with characters getting eaten and killed in a way rarely expressed through the studio. This adds a real weight to Ratigan and his conflict with Basil as it really feels like the stakes are there. His plan is also quite fun and it is sad to see the film butcher its showcase of it so badly as there is real potential there.

The animation for the film is also excellent with Disney continuing its trend of providing beautiful work even when the narrative is weaker. The Great Mouse Detective is specifically strong when it comes to aesthetics with the color and background art creating both incredible moments of warmth and coldness. It also should be mentioned that the final conflict is fantastic with the use of computer-generated imagery being really well done. Disney knew that the technology was not at the point where this technique should be over-showcased with the small touches done to give the final sequence an extra level of energy being genius. It is ironic that a film with such a lackluster story would be the Disney film to get a truly great final fight with this part of the story traditionally being one of the weaker parts of the Disney presentation.

The Great Mouse Detective might not be a total disaster, but the film ultimately disappoints its own potential with a dull story and confusing perspective that undercuts its own effectiveness. The film is a technical marvel and there is no denying the strength of Vincent Price, but the mystery is mishandled and the protagonists are simply not fun to be around. For most of the film, there is very little to engage with and it is easy to see why the film has become lost within the vast Disney filmography.
Become a Patron!