the fox and the hound 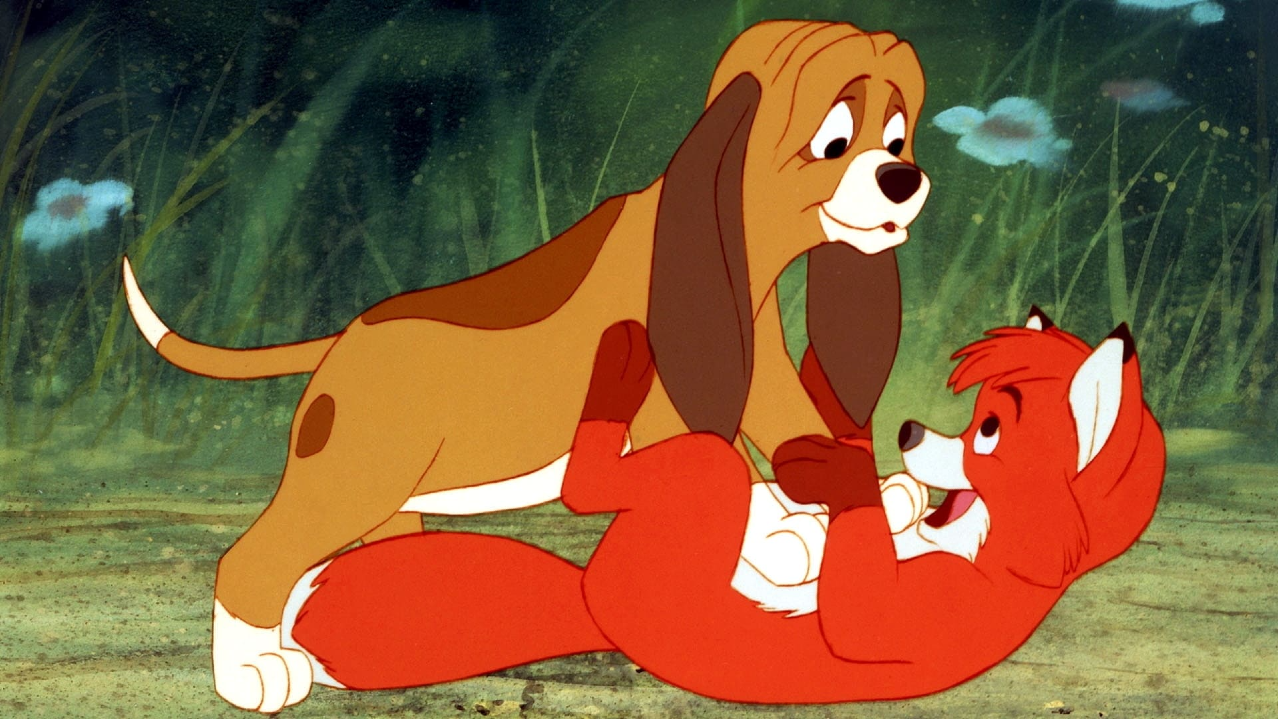 When it comes to Disney, many agree that one of the saddest features from the studio is 1981's The Fox and the Hound. Following the friendship between a young fox named Todd, voiced at various ages by Keith Mitchell and Mickey Rooney, and a young hunting hound named Copper, voiced by Corey Feldman and Kurt Russell; The Fox and the Hound is a compelling look at friendship that almost feels Shakespearean in its drama at times. This tale of friends turned enemies is easily one of the most dramatic and thrilling Disney films with the emotions truly feeling heartbreaking without negating the overall animated charm one would expect from the studio.

The Fox and the Hound is a film of two parts. The first is a story of friendship. Young Todd has been abandoned and finds himself cared for by a sweet old woman named Widow Tweed (Jeanette Nolan). While playing outside, he meets his neighbor named Amos (Jack Albertson) who is an avid hunter and has two hunting dogs: an older hunter named Chief (Pat Buttram) and a new puppy named Copper. Todd and Copper immediately hit it off and form a friendship that is absolutely adorable. The animation is predictably strong and there is no denying how cute these two characters are as they run around and get into trouble. While for other movies dedicating so much runtime towards building a relationship like this might be an underwhelming use of runtime, for The Fox and the Hound, it is vital.

The second half of the film sees a time jump as both Todd and Copper separate for the winter and find themselves with each-other once again in the summer. Even though both have been told time and time again that they would eventually grow apart, both Todd and audience are left with the hope that friendship will prevail. Sadly, the complexities of their roles, one as a hunter and one as the prey, grows to be too much and the two end up as bitter enemies. This is captivating work that provides some of the most emotionally poignant drama Disney has ever seen. It is also a thematically rich canvas that the audience can paint on to include multiple unique readings. One could make the claim that this is ultimately a metaphor for politics, one could say it is about toxic masculinity and queerness. Once you get these more complex narratives, you get more complex thought and the richness of the text is clear compared to plenty of other animated projects.

This also leads to a thrilling third act with incredibly intense action and violence. The film turns into a rollercoaster of fighting that sees nearly all parties nearly run into their deaths. Even though the film is meant for kids, it does genuinely feel like the stakes are real and that death could potentially come for any of the main characters. How the emotional beats flow are all rather smart and the film never loses itself to the chaos. The one part of the ending that might feel somewhat underwhelming is the actual conclusion which refuses to give the audience the closure most will end up wanting from the film, but this subverting of expectations only adds to the emotional weight of the overall project.

When it comes to complaints, most are rather minor. Narratively, it feels clear that the film could have benefited from having more time. While running at a clean 83-minutes is appreciated for most features, The Fox and the Hound is a big story and having more time to flesh out emotional beats and relationships would only benefit the overall project and make developments such as the introduction of Vixey (Sandy Duncan), a female fox that Todd forms a relationship with, flow a bit clearer. If one doesn't want to add to the runtime, there are ways to reallocate it better. The side characters are incredibly weak with a surprising amount of the runtime being spent following a group of local birds that are never especially funny or interesting. To cut them would open up more runtime for development and also help keep the film more focused. The score by Buddy Baker is quite generic which is especially noticeable towards the beginning of the film when the drama hasn't quite hooked the audience enough for them to be engaged enough to overlook the music they are hearing. Kurt Russell is also strangely weak as the adult Todd with a rather lacking performance when it comes to emotion. While none of these elements even come close to ruining the film, they undeniably are marks against it that just stop the film from reaching masterpiece level.

The Fox and The Hound is a film deserving of not just the love it regularly gets, but even more. While it is impossible to claim the film is an all-time masterpiece, especially for this era of Disney this is a thematically rich and crafted feature with real value.
Become a Patron!