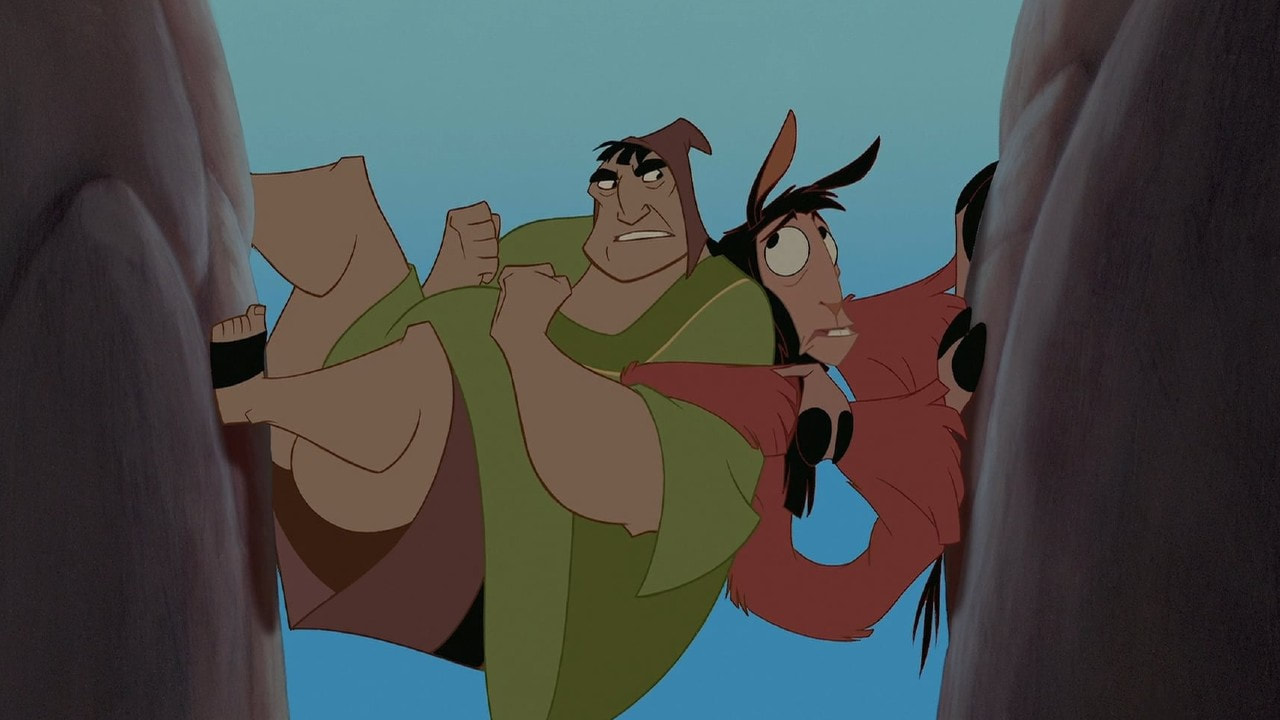 After the heights of the 1990s, Disney was left with something of an identity crisis in the early 2000s as the studio struggled to find a confident voice in a growing sea of mainstream animation studios and projects. This led to a rather random and turbulent time for the studio that saw some of the more unique releases from the company's long history. While quite a few of these films would end up being disappointments, there were still gems to be found with one of the largest being Mark Dindal's The Emperor’s New Groove. Following an arrogant and selfish emperor named Kuzco (David Spade) who gets turned into a llama after a failed assassination attempt leaving him with only a kind villager named Pacha (John Goodman) for help, the narrative of The Emperor’s New Groove might be cliched but the style drags the film to much more memorable heights.

The story of The Emperor’s New Groove, once one boils it down, is one that has been done to death on the cinema screen. A story of a rude and sheltered leader learning the emotions of compassion and empathy after being rid of all their wealth and protection is clearly nothing new. The Emperor’s New Groove overcomes this simplicity for a number of reasons, one of which being the performances of the film. While it might be predictable what emotional journey Kuzco and Pacha will take each-other on, there is no denying the effectiveness of David Spade and John Goodman when it comes to this narrative. Goodman especially brings an unbelievable amount of innocence and likability to his role with a natural chemistry almost immediately forming between him and Spade.

Spade's power speaks to the biggest highlight of the entire feature, its entertainment value. The Emperor’s New Groove is, without a doubt, one of the funniest animated comedies in history. Even if one does not connect to the individual jokes being made, there is no denying that the film is giving its full effort into defying expectations and dedicating itself towards being a fun viewing experience. In a similar way that Disney experimented with narrative and storytelling in The Many Adventures of Winnie the Pooh, The Emperor’s New Groove is quick to break the fourth wall and play around with structure. Kuzco will interrupt the film to add little quips and notes while the film itself is almost a non-stop comedy with a genuine sense of creativity and craft. The Emperor’s New Groove is not just throwing everything at the wall and hoping it sticks, it is instead crafting organized chaos that comes together to great results. This is not only in the screenplay of the film but also the visuals. The animation throughout the feature is lovely with countless visual gags giving audiences something new to look for on rewatches. The blending of comedy designed for younger and older audiences is incredibly smooth also as neither comedic style demands the attention of the narrative for too long to where the opposite demographic would feel a disconnect.

There is no denying that of this comedy and entertainment within The Emperor’s New Groove, there are few as spectacular as the villains. The evil Yzma (Eartha Kitt) and her muscular, and significantly younger, henchman Kronk (Patrick Warburton) are instantly iconic figures with an adult edge only enhancing their on-screen presences. It only helps that Kitt and Warburton steal the show with every scene they are in with two of the best animated performances of all time. These characters are entertaining and wonderfully unique compared to any other villains seen in the Disney filmography. The only downside of this magnificent ensemble is the lack of diversity as almost exclusively white voices are used to bring to life the film's South American characters and culture.

When it comes to Disney films that truly can be considered to be on the level of being called a masterpiece, The Emperor’s New Groove feels absolutely deserving of consideration. Every aspect of the film is operating at an inspired level that uses cleverness and craft to create one of the most entertaining films of all time. The ensemble, despite the moral faults within their casting, are all absolutely effective and the chemistry felt between them is magical. In retrospect, Disney might have had a rough 2000s but the new Post-Disney Renaissance era started off with a bang!
Become a Patron!