the face of madness returns: 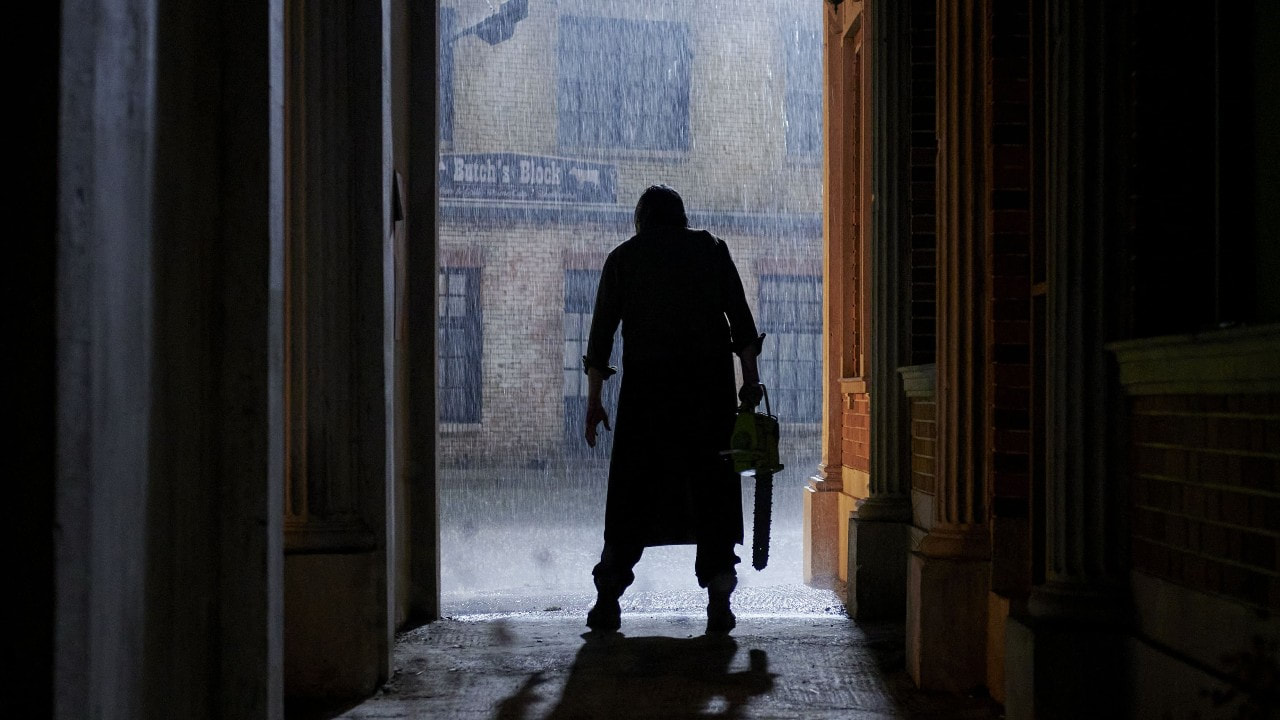 Ever since Tobe Hooper's 1974 masterpiece, The Texas Chain Saw Massacre, the legend of Leatherface has bounced between various names, timelines, and filmmakers with the realization of creating a true and definitive horror sequel still being a fish not yet caught. Following the success of 2018's Halloween which brought the origins of the Michael Myers saga back to the big screen with many considering it the best sequel that franchise has seen, David Blue Garcia's Texas Chainsaw Massacre looks to follow the same formula to success. Following a group of young adults traveling to the ghost town of Harlow, Texas to hopefully rebuild the town with a fresh millennial vision, the group ends up at the slashing end of Leatherface (Mark Burnham) who is out for revenge. Leatherface's presence is enough however to gain the attention of Sally Hardesty (Olwen Fouéré) who wants her own revenge against Leatherface for killing her friends.

With the franchise to date being in a sense of identity crisis aging all the way back to the second feature, it comes as no surprise that Texas Chainsaw Massacre is a mess when it comes to voice and purpose. Trying to capture the layers of Halloween which successfully blended not just the past and present in-universe but also larger more relevant themes, the screenplay of the film is abysmal with nothing coming together into a solid single vision. The film is chunked into what feels like segments that are as unsatisfying as they are shocking at times. To see a Texas Chainsaw Massacre film with drama like a moral debate surrounding the confederate flag and a school shooter overcoming her trauma is rather strange, especially for how meaningless most of the social commentary ends up being. While Leatherface murdering a group of influencers on Instagram Live might be fun, it is undeniably out of place for a film that is attempting to also slow build the grand return of possibly the most iconic final girl in horror history: Sally Hardesty.

Hardesty's return on paper is clearly an exciting prospect but sadly her involvement feels like the weakest part of the film. With a rather forced build that sees Hardesty enter a situation already built and defined with new characters, her presence is out of place and her actual combat with Leatherface feels rushed. There is never time for the true weight or gravitas of this showdown happening after nearly half a decade since their original battle. It is entirely possible however that this was due to a lack of faith in what this fight would truly mean considering the lack of Marilyn Burns. Passing away in 2014, to bring Hardesty back sadly meant a recast was necessary and Olwen Fouéré struggles massively in this role. Lacking nearly any sense of personality or emotion, there is simply nothing performance-wise here to enhance the already poor writing this character was given with the final thesis being that her inclusion boiled down to being nothing more than a good idea on paper and an exploitive selling point in actuality.

What is far more interesting however is the character Lila. Brought to life by yet another strong performance from Elsie Fisher, while the screenplay is inconsistent, especially when it comes to her past which sees her as the survivor of a school shooting, by the end of the film with Lila is forced to stand up for herself against Leatherface there is a genuine sense of care found within the audience watching. While it could have been done incredibly better, seeing this character rise up through her pain and find strength is captivating and is easily the best emotional bone the film is able to stand on. Without giving spoilers, it is rather sad to see the conclusion given to this character as the film is clearly hoping to continue her story which seems unlikely to ever really happen.

Past the emotions, the thrills and kills within the film are overall solid with a strong sense of tension and physicality gave to any scene featuring Leatherface. This is other than when he is the focus of a scene however. The mask given to Leatherface in the film is laughably bad with nearly any sense of fear leaving as soon as the camera focuses on his face. It is somewhat refreshing to see the character more in a localized setting that has him near others more often than ever, but outside of one brutal kill, most of his content feels rather average. The lighting is the big standout from the film when it comes to the technical side of things with plenty of neon and rain giving the film a unique visual identity compared to the rest of the franchise which has historically basked in browns and dirtiness.

While this all comes together to create a film that is technically a mixed bag, one note of credit has to be given to the film being entertaining. Coming in at a mere 81-minutes, the film might not always be good but is at least wild enough to be fun. There are so many films in this franchise that feel like a slog to sit through but this edition makes choices and goes places one never quite would expect. Similarly but far less self-aware as The Texas Chainsaw Massacre Part 2, this might not come close to reaching the highs of the original film but is so out there that is feels like might just work. Maybe saying that an audience can laugh at your film isn't the highest praise, but it could definitely be worse.