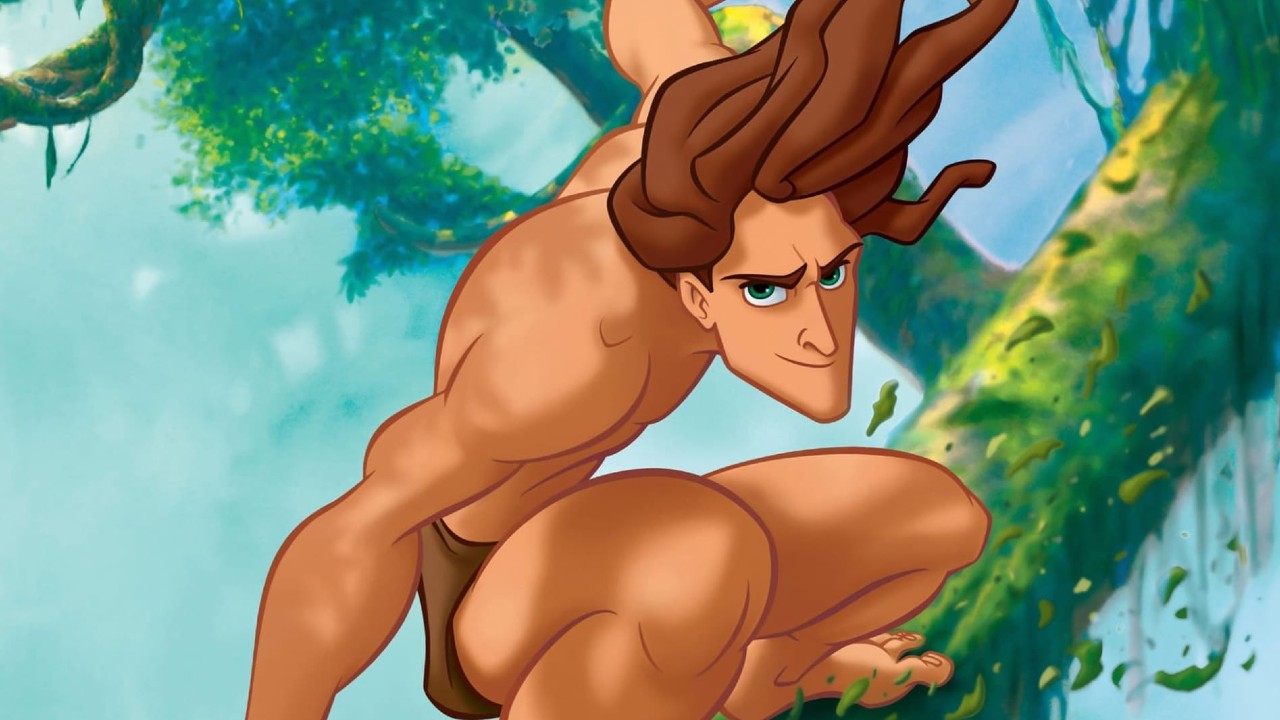 In cinema, there are some stories told time and time again with one of these classics being Edgar Rice Burroughs's Tarzan of the Apes. Telling the story of a man named Tarzan who grows up in the jungle among a family of apes, this is a story with plenty of adaptations with the biggest being Disney's 1999 effort. While the parallels to Disney's 1967 film, The Jungle Book, are obvious, Tarzan crafts an enjoyable and satisfying jungle adventure filled with plenty of fun and emotion.

Deep in their experimentation with computer-generated imagery, the biggest highlight of the film is arguably its visuals. While Disney has animated gorgeous jungles before, never has their been movement and energy quite like that of Tarzan. The visuals of Tarzan surfing across the web of branches that make up the lush green forest still is incredibly impressive and unique compared to anything seen in animation since. The movements feel smooth and clean there is never a moment where it feels like the animation team is biting off more than they, or the technology, could chew. The boom of computer-generated imagery quickly would lead to unreasonable expectations leading to dated visuals and mixed results; Tarzan is wise to use this technology sparingly and in a way that is still timeless.

The story itself is also effective. While there are problematic sides to the film's moral narrative, Tarzan remains an overall loving film with a worthy villainization of English explorers, a more poignant upgrade from the original narrative. This conflict also gives one of the best Disney villains in William Cecil Clayton who is played by Brian Blessed. Clayton is a brooding force of evil masculinity who carries one of the more notable presences when it comes to Disney villains of the era, largely due to the performance by Blessed. The final conflict between Tarzan and Clayton is also one of the more satisfying Disney final fights with a rather brutal and harrowing conclusion matching the gravitas and weight of the villain. It only helps that there is a level of poetry given to Clayton's eventual demise that gives the entire conclusion a more poignant sense of finale.

Beyond just the threats of the film, Tarzan is a rather enjoyable film. The romance between Tarzan and Jane (Minnie Driver), a woman who travels to Africa to study gorillas with her father, might be rushed, but there is a real sense of chemistry felt and a care that builds over time in a sense similar to the relationship within Beauty and the Beast. The film takes time to develop their chemistry with a rejection of the common "love at first sight" trope. The side characters are also rather fun. From Jane's father, Professor Archimedes Q. Porter (Nigel Hawthorne), to the various animals who have befriended Tarzan; there isn't a single weak link among the cast. Even the more polarizing comedic personalities such as Rosie O'Donnell are used in intelligent ways that never feel too overpowering or forced. The only complaint with these side characters would be that there are times where extended scenes linger on their side adventures that feel a bit too long. There could have been a better balance found that would have allowed even more time for Tarzan and Jane's relationship to blossom.

However, not every side character is present for comedic relief. While there is the conflict of William Clayton and Tarzan trying to find his place with Jane, there is also the side to his character that has relationships to the jungle and the gorillas that have raised him as their own. The emotional weight of his relationship to Kala (Glenn Close) and his unique dynamic of trying to prove himself to Kerchak (Lance Henriksen) leads to drama of genuine weight. This connection is filled with emotional struggles and complex relationships that help evolve the film from the more simple natured plot of films like The Jungle Book.

The last piece of the film that needs discussion is the soundtrack. While Disney normally gives their songs to characters to sing, Tarzan is unique in its use of Phil Collins who sings over various scenes. While the soundtrack is undeniably unique and helps give the film a fresh identity against the previous work by the studio, it is hard to not feel like Collins is often a distracting presence. His songs often feel lackluster in their narrative purpose with Collins failing to give the added emotional strength that so many Disney sound tracks embrace through their use of songs. While not as disastrous as Collins' work in Brother Bear, it is clear he still is an overall misfire here.

For coming at a time where so many Disney films ended up feeling lackluster, Tarzan is somewhat of a hidden gem. While there are faults, the drama and emotion of the film does hit rather effectively with both memorable visuals and weight. The animation is simply stunning and there is enough complexity within the film's plot to give the audience something to chew on. While there still are some underdeveloped plots, specifically the relationship between Tarzan and Jane could use some work, the film overall is a success and ends up being one of the stronger Disney outings for the time.
Become a Patron!