nothing is as it appears: 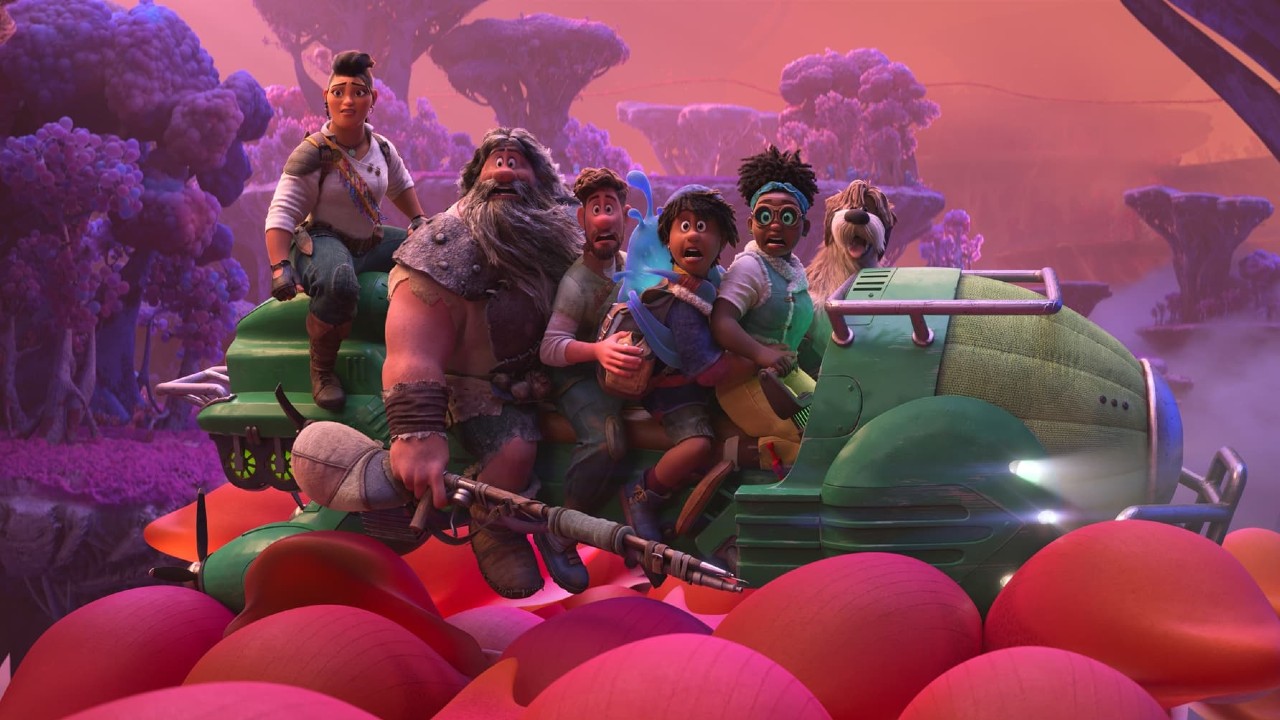 Over the last century, Walt Disney Animation Studios has created some of the most iconic and moving animated features ever to be seen on the big screen. While the studio has proven to be undeniably flawed, it is also undeniable that the studio has defined childhoods for generations over its 61 released features. The newest of these, Don Hall's Strange World, proves that there is still gas left in the tank for the studio. Blending the pulp magazines and the retro science-fiction film genre as inspiration, Strange World sees the multi-generational drama of the Clade family. Living in a mysterious land called Avalonia which is surrounded by impassable mountains, the Clade saga starts with Jaeger Clade (Dennis Quaid). Jaeger is obsessed over finding a way through the mountains which is a journey that saw him mysteriously disappear without a trace leaving his son Searcher (Jake Gyllenhaal) to grow up resenting his failures and shortcomings. Searcher, who is now grown up and the discoverer of a plant named Pando which can give Avalonia the power of electricity. Suddenly it is discovered that Pando is dying and to save it, Searcher, his wife Meridian (Gabrielle Union), and their 16-year old son Ethan (Jaboukie Young-White) must adventure into a mysterious new ecosystem found through a hole. While messy, Strange World is a charming and meaningful feature that clearly feels worthwhile against the current slate of animated releases.

Right away, one of the biggest strengths of the feature is the animation and titular strange world. Blending both unique ideas for creatures with strong animation that isn't afraid to experiment with textures and color, the world of Strange World carries a genuine awe factor that is perfect for the sense of adventure it is trying to build. The standard of animation has gotten to the point that one can feel the bounciness of this world and the weight of its creatures. There is a tremendous amount of creativity being used here that is refreshing and noticeable.

Make no mistake that at the core of Strange World is a much more human-focused story. The drama of the Clades might not be anything groundbreaking, but it still remains effective. The conversation presents a message of empathy and understanding that one's parents are nothing more than flawed humans themselves. While Searcher has understandably villainized his father, he also cannot help but start to understand the motivations and logic that drove his dad. This is a mature and complex emotional heart for a feature with Disney continuing its recent streak of exploring generational trauma and a main idea. Even in comparison to other recent features however, there is a specific gravitas and understanding found within Strange World that elevates it in a way sure to be meaningful to audiences of all ages.

Strange World takes this family drama and embraces it alongside another story of environmentalism. The film presents an interesting allegory for the real world's climate crisis with a specific focus being given to the relationship between society and the resources they use. What is the consequence of our actions? What are we willing to sacrifice to protect the Earth? While Strange World presents these questions in more casual ways that are easily digestible and understood by younger audiences. This doesn't prevent however the presence of these conversations from giving the entire project a more meaningful existence and thesis.

The performances are yet another highlight of the project. Jake Gyllenhaal is rather fantastic. Bringing both a sense of vulnerability and power, Gyllenhaal brings the complex identity of his character to life in an effective manner that is one of the best voiceover performances of the year. Jaboukie Young-White is also a noticeable standout. His character is largely the heart and soul of the project with him trying to find his place in the world and feeling frustrated due to the pressures of his father. He is incredibly likable and it is also worth mentioning that his character is easily the best LGBTQ+ representation seen from Disney so far. The MVP of the project however is clearly that of the Clade's dog named Legend. Absolutely adorable, Legend is possibly the most realistic animal sidekick ever seen in a Disney film. Goofy and always happy, Legend acts like a real dog and jumps at everything unaware of any danger or fear. He is consistently the funniest part of the film and genuinely steals multiple scenes.

This isn't to say the film is perfect however. There is a frustrating lack of development that leaves the audience somewhat confused about the world they are watching. There is a social obsession it seems with trying to get over the mountains surrounding Avalonia but the world is never explained or introduced to where the audience would understand this pressure. It doesn't seem like Avalonia is struggling for resources and the questions only become more confusing as the world gets expanded and further details are realized. Avalonia also has a noticeable lack of identity in iconography and personality. This feels like a placeholder required by the plot rather than a location fully developed or realized through execution.

The film is also at times quite convoluted in message and plot with a rather vague direction given to the film's journey. Quite a few emotional beats are predictable and cliched but at least the emotional poignance of these scenes remain strong. The other confusing piece of the film is its framing. As mentioned, Strange World takes inspiration from pulp magazines and the retro science-fiction film genre. This is the case for the book ends of the film but it remains almost non-existent for the rest of the feature creating a confusing identity for the feature. This framing adds nothing of value and the comic book perspective especially is strange as the moments of style within the feature itself are clearly more reminiscent of cinema than comic books. This is simply unneeded and only hurts the clarity of the feature.

Strange World might not be the next Disney masterpiece, but this is clearly above and beyond much of the studios' recent releases. Blending a magical sense of wonder with a meaningful poignance, Strange World is a fun yet purposeful feature that justifies its own existence at every point. This is an easy recommendation for Disney fans of all ages whether one goes to the theater or waits for its impending Disney+ release.
Become a Patron!