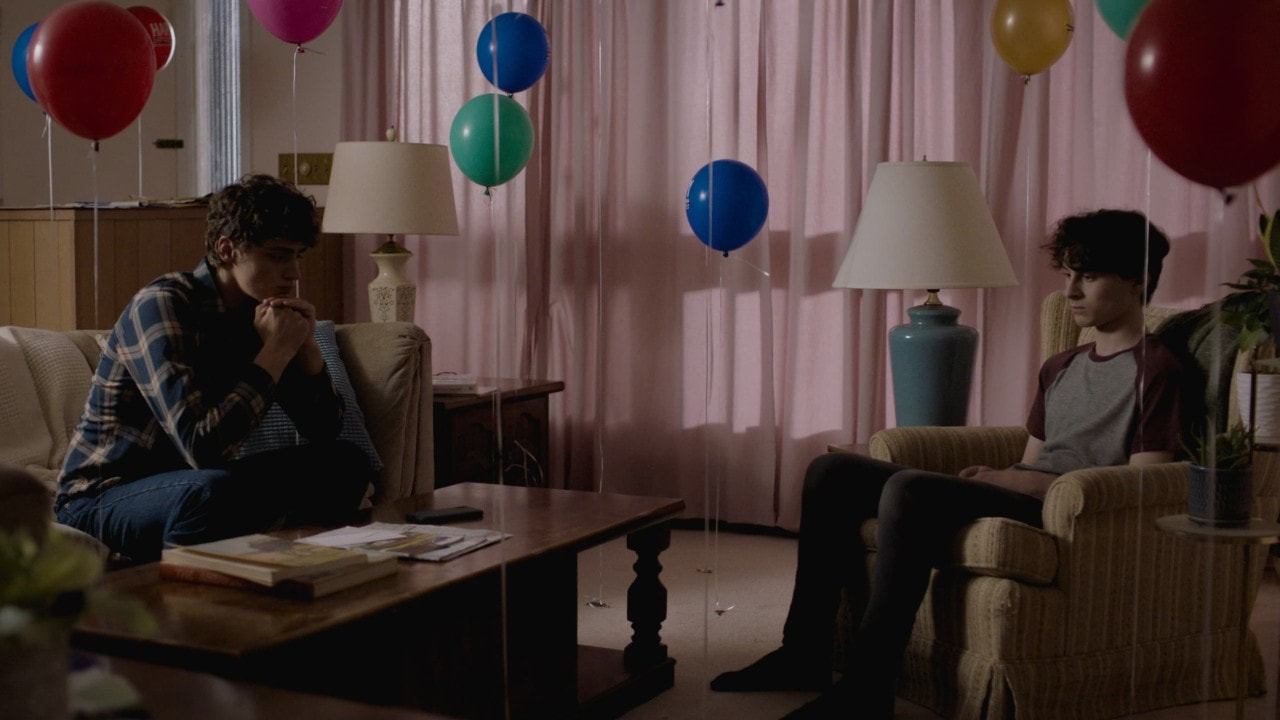 In life, while there is a common belief and value in the idea of choosing one's own destiny; there remains an undeniable truth that the paths and situations individuals are born into are nothing they can control. While this notion of family can lead to love, it also can just as easily lead to pain. Some can be cursed by the relationships they are born into with dysfunction and tragedy around every corner. Jamie Sisley's solo feature directorial-debut, Stay Awake, highlights just this.

Screening as part of the 2022 Berlin International Film Festival, Stay Awake focuses on a pair of brothers named Ethan (Wyatt Oleff) and Dereck (Steffan Argus). Both still trying to find their place in the world and next steps following their education, their lives are undeniably made more complicated by their mother Michelle (Chrissy Metz). While their mother has love in her heart for her boys, she is also powerless to an opioid addiction she cannot shake even with the help of therapy and rehab. Ethan and Dereck spend most nights out on the town trying to find her to rush her to the hospital yet their lives continue to pass around them. While they want to have faith in their mom and hope for a better future, they also have to contend with the idea that they might not be able to help her and that if they continue to try, they might be throwing away their own futures.

This debate is just one of the many nuanced perspectives and conversations found within Stay Awake. While on the outside family can seem incredibly simple, the actual emotions inside the storm are anything but. Stay Awake might paint a tragic light with truly heartbreaking emotions, but it never loses the naive love found within the actuality family. While one absolutely can detest Michelle for what she does to her children, one can also not fully blame her acts as being malicious. There is a love she has for her children and a genuine desire to be a better mom, but she simply is not at the point where she can provide that. The film never casts judgments but instead stews in a soup of sadness and disappointment. Alongside the characters, the audience desperately wants every scene to end in triumph and for everything to be ok by the end but over the film's 94-minute runtime, all parties are beaten down enough to realize that those dreams are more than likely nothing more than fantasy.

This masterful build of emotions and nuance is a sign of multiple fundamental pieces of the film working to insanely high levels. The screenplay, also from Jamie Sisley, is absolutely one of these pieces. The film has some of the best-written dialogue of the past decade and knows just how to play with the hearts of both its characters and the audience watching. It works hand in hand with masterful editing brought to the film by Alan Canant to create some jaw-dropping scenes that speak to just how devastating cinema truly can be. The technical side of the film is flawless with the everyday small-town setting being shot with some of the most inspired and genius visual ideas seen in recent memory. The film might on paper seem like it exists in a generic world, but the inspiration given to every frame elevates the project far beyond that.

The acting is also stunning. Every character is given large shoes to fill as they tackle nuance and emotion not often spoken but rather exposed through subtle acting decisions. This is not easy but everyone is perfect with the main three actors building relationships that feel real and tangible. It is beyond refreshing to see Chrissy Metz finally receive a truly wonderful screenplay to chew on as she brings to life a complex mother held up by her love yet shackled by her addiction. The audience, alongside the characters, has to wrestle with her character and what she means to the world around her and it is up to Metz to give her the genuine heart needed to not just become a villain. Metz more than accomplishes this and truly feels like she is on the verge of becoming one of the strongest working actors of today. Both Wyatt Oleff and Steffan Argus are also incredibly strong here with quiet yet haunting perspectives of two wandering souls who battle a war between losing themselves or losing their mother. Much of the time spent with these performances are in silence, yet their stares and demeanors speak a thousand words. When the emotions need to come out, they unleash everything they have resulting in complex yet undeniable performances of power and pain. It is almost unthinkable how strong this cast is and to think that there is a large chance performances like these could go unnoticed in an awards season is genuinely heartbreaking.

The film builds and builds to a catharsis ending that is challenging and not without regret itself. The situation these brothers find themselves in is inescapable. There is no road forward without consequence and while some might find this acceptance of sacrifice frustrating, it only helps the film speak to its larger message. While a deep and masterful family drama, Stay Awake is a needed voice in the conversation of addiction. Without negating the pain and suffering this causes while also holding love and empathy for those involved, Stay Awake is an unrelenting showcase of just how far this struggle can go and that every story doesn't end happily. It is brutal, but it is a reality for many and cinema at its highest form allows real perspectives like these to be heard and respected.

Stay Awake is a film deserving of being known as a modern masterpiece. With a cast delivering some of the strongest work seen in decades, a flawless screenplay, and inspired craft; not a single frame of the film disappoints or leaves anything to be desired. This is a painful and brutal film, but it is one absolutely worthwhile and it never loses the family love at the hearts of every character and relationship.