will you go on the record?: 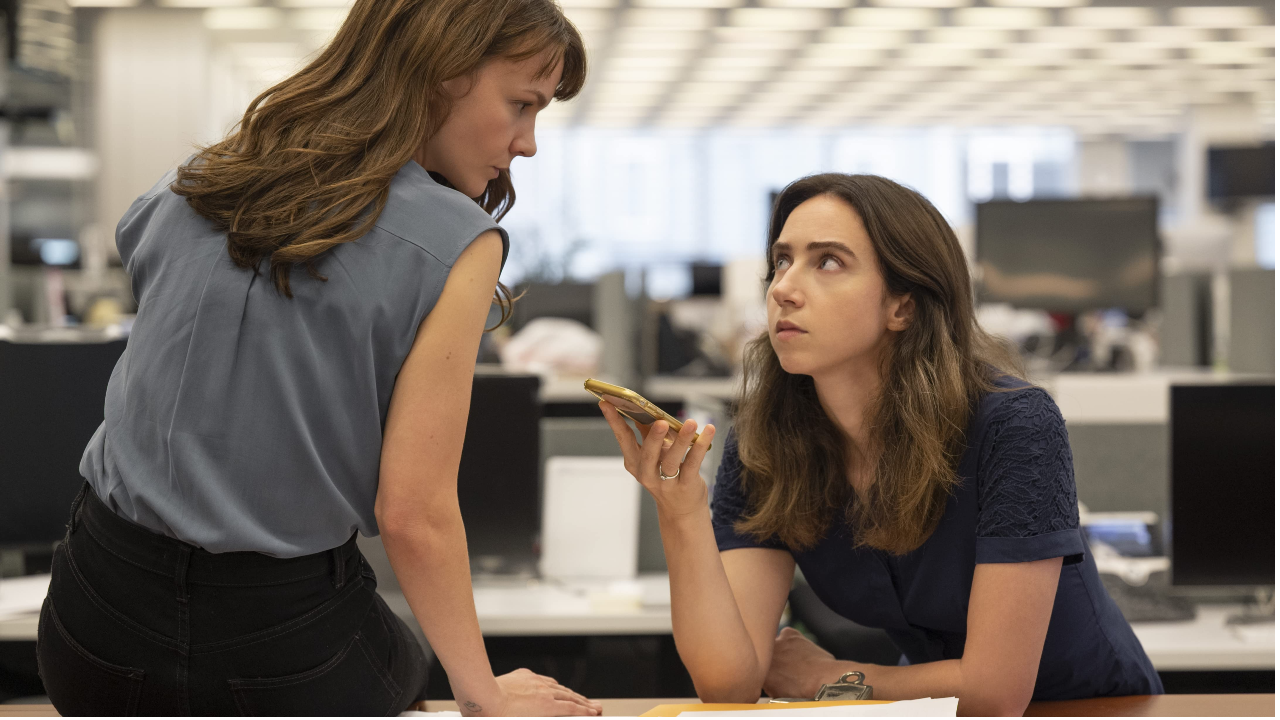 One of the most defining and most important news stories of the 2010s is the rise of the #MeToo movement where women from across the globe shared their voice to reveal the true horrors of sexual harassment with a specific focus looking for change in the work place. This movement saw hundreds of men fall as they finally faced consequences for their actions which many got away with for decades. One of the most mainstream of these figures was Harvey Weinstein who was at one point the most powerful and influential producer in all of Hollywood. It was only a matter of time until the efforts leading to Weinstein's downfall made their way onto the big screen with Maria Schrader taking a crack at this story with She Said. Screening as part of the 2022 San Diego International Film Festival, She Said takes the perspective of The New York Times journalists Jodi Kantor (Zoe Kazan) and Megan Twohey (Carey Mulligan) who investigated and largely brought to life the allegations against Weinstein. While there are flaws, She Said is a remarkably powerful and respectful look at these efforts and the sheer amount of energy that went into breaking this story that would forever change society.

When telling a modern story of such weight and emotion, immediately fears of exploitation and misrepresenting the truth come up but both the direction from Schrader and screenplay by Rebecca Lenkiewicz feel respectable with the film staying largely in the objective truth. While some might desire a bit more narrative drama to their stories, this feels crucial as the film defines itself with the authentic weight of the situation. These journalists have no idea of the storm they are walking into and the threats that face them feel grounded and authentic. The feature not only celebrates the bravery of these journalists but also the survivors willing to speak with them. While many stay off the record due to fears of lawsuits and further emotional damage, the film is empathetic to these concerns and pays respect to these women while also celebrating those who stepped up to give the story the credibility it needed. While these actors might be playing roles, there are women who lived these experiences and She Said goes out of its way to recognize their names and the gravitas of their actions.

With this said, She Said is a rather large feature at a 129-minute runtime that feels desperately in need of a cleaner edit. With often redundant conversations and multiple leads that end up going nowhere, there is a way to capture the size of this investigation and these efforts in a cleaner and more focused package. This can cause some of the third act to feel somewhat dull as the audience is desperately waiting for the story to be published, something all audiences know is coming unless they have been living under a rock. While the film succeeds in recognizing the story, it is somewhat inefficient as building drama surrounding its fate. The only other major issue with the film's screenplay is its use of comedy. Specifically with its use of comedic timing in scenes of dialogue, there are times where the film seems to try to suggest that various scenes of banter should be seen as comedic and enjoyable even when the subject matter is beyond disturbing. There is nothing funny about a scene where Twohey is trying to figure out how many settlements Weinstein made with his victims yet the film treats this scene like a fun guessing game that is somehow actually funny. While this is rather sparse, it is the one area where the film borders on feeling disrespectful with this lightness doing both the film and real life story no favors.

The lead performances are competent yet ultimately unremarkable. While Mulligan has her moments, Kazan is rather flat here with very little emotional follow through for their arcs that bring up the poignant observation that personal life never stops, even during these historic stories. These two still have to be moms and wives with the amount of effort they are forced to put into their work causing serious cracks in their relationships. While this is a worthwhile point, the film does very little with it and it is hard to think of a scene where either Mulligan or Kazan feel truly memorable or exceptional. Instead, the power comes from multiple of the side characters who they interview for the story. Actors like Patricia Clarkson and Jennifer Ehle are the ones to bring the devastating expressions of emotion and pain that will floor audiences and hit them in the gut, the proper emotion for a story like this.

While not perfect, She Said is still a rather strong feature that is overall respectful and competent in how it brings this story to life. Offering a new perspective by focusing on the journalists, She Said finds a worthy narrative that both captures the objective truths of the investigation while also offering deeper emotional connections and theses. Had the film cut the comedy and delivered a more focused product, this could have been a masterpiece but as is, the film remains a strong yet flawed film that is still worth checking out.
Become a Patron!