I think it is safe to say that I am not a fan of the DCEU or whatever you want to call the connected DC Universe starting with Man of Steel. This is a universe that has produced some of the hardest films I have ever had to sit through and the toxic fanbase has made me bitter at even the idea of mentioning the series. Even it's best films to this point have failed to surpass just being "pretty good" in my opinion and overall this is a series that has done nothing for me up to this point. Yet despite all of that I was actually really excited for Shazam!. This movie had such an amazing trailer that I got to see debut at San Diego Comic-Con last year and since then every bit of marketing clicked for me and excited me. This movie looked like such a good time and it finally seemed like the DCEU would produce a movie that would be memorable for me. Unfortunately, I can't quite go that far. This is a movie that I do have issues with and will ultimately forget over time but I still it has its moments and overall is definitely one of the stronger additions to the DC Universe.

And easily the best part of this movie is the humor and chemistry between characters when it comes to the comedy throughout this film. In past DCEU movies that have tried to be more comedic like Justice League and Aquaman, the humor has really missed with me and failed to get a reaction out of me, yet with Shazam! the comedy just worked. Sure its dumb and simple for the most part but it is so much fun that you can't help but enjoy yourself while watching it. A lot of this comes from the chemistry between Jack Dylan Grazer and Asher Angel/Zachary Levi. You can tell that these actors are having a great time on set and their friendships feel so genuine, they have such impressive chemistry and brought the best out of each other. 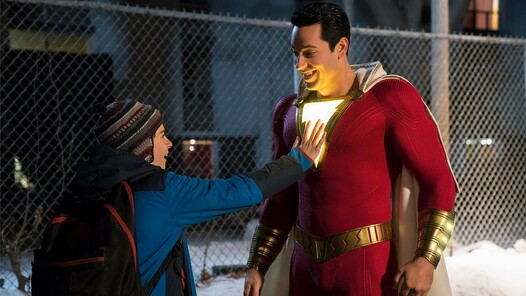 Though even with the comedy I can't say that it is anything overly amazing, I never cried laughing while watching this movie yet I was overall entertained during these scenes. Yet unlike what the trailers seem to suggest this movie is far from being an all-out comedy in the same vein as a movie like Thor: Ragnarok, there are plenty of scenes that are surprisingly dark and gruesome which felt weird to me. These scenes felt like your average dark DCEU movie that failed to connect and felt awkward. This movie feels messy as it switches from a dark and gritty action movie to a fun comedic teen film. It never really finds the perfect balance between these two sides which brought down the quality of each side. I also think this film does an injustice to the emotional arc that Billy Batson goes through. It gets lost in the shuffle and never really hit as it should of until a scene about two thirds into the movie that was such an excellent scene that hit me so hard. I just wish that I could say more of his character's journey worked for me than a 3-minute scene.

The ending portion of this film also felt pretty long to me, it kept growing and growing way beyond what it needed to be and had me feeling its length by the end. As with plenty of superhero movies, it is safe to say that Shazam! also has villain issues at least in my opinion. I found the actual set up to this character to be very uninteresting and again I feel like they don't know what direction to take him in. There are scenes with him that are deadly serious and even gruesome as they have scenes that make him seem like a legitimate threat, yet he also gets mixed into the comedy and sometimes it feels like they are playing him so over the top as a joke to some extent. Just like with so much of this movie he feels messy and because of that he never quite landed for me.
Still, overall I want to make it clear, despite my flaws with the film I do think Shazam is a good movie experience. It has some good humor and some great acting, I just think it is too messy and refuses to commit to any pieces of its identity to go beyond just being "good" for me at least. Plenty of people are loving this movie and I am genuinely happy for them, I just can't say that I had the same experience.