are we the suspects?:

see how they run 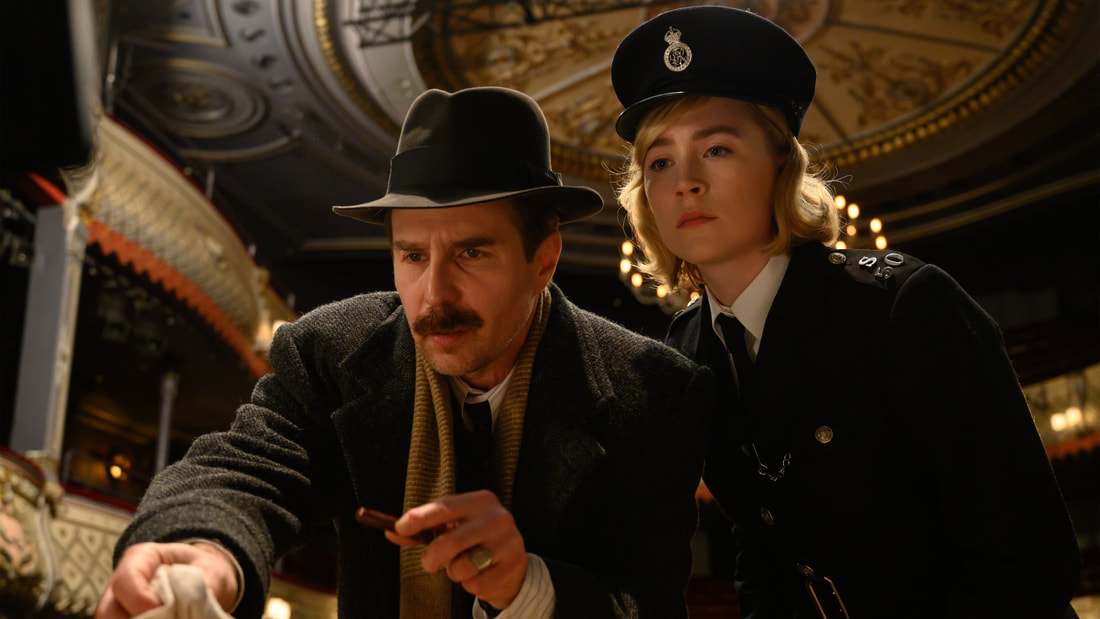 After a disappointing time of dormancy, it is safe to say that the cinematic murder mystery genre is back! From Kenneth Branagh's work adapting Agatha Christie stories to Rian Johnson's work with the now expanding Knives Out universe, audiences have proven to be ready for some classic whodunnit content and the newest film to meet this desire is Tom George's See How They Run. Set in 1950s London where Agatha Christie's The Mousetrap is celebrating its 100th performance. Celebration is due as the play is receiving a cinematic adaptation while the play continues to produce a full house night after night. This celebration, of course, takes a dark turn however as the man in charge of the film adaptation is killed leaving it up to Inspector Stoppard (Sam Rockwell) and rookie Constable Stalker (Saoirse Ronan) to find who committed the crime!

Serving as a love letter to the Christie era of murder mysteries, the biggest success of the picture is simply how enjoyable it is. Opening with murder-victim Leo Köpernick (Adrien Brody) as narrator before eventually switching to Constable Stalker as the lead perspective for the audience, there is an incredible amount of wit and charisma to the film found in the relationship between screenplay and performances. The script by Mark Chappell is self-aware and uses the expectations of the murder mystery genre to find clever moments of comedy and defiance of cliches. Both defining itself by the strengths of the genre while also being able to poke fun at itself, See How They Run is a rather smart modern use of this established realm of cinema.

However, it is the performances are that bring this story to life. Much drier than Knives Out, the cast is more subtle in their comedy with the main highlights being Ronan, Rockwell, and David Oyelowo. These performances find a more subtle form of exaggeration than some might expect with a wonderful chemistry shared between the ensemble. This more dry approach allows a darker underbelly to breed throughout the film that eventually plays into the climax which has a rather satisfying and heartbreaking edge. Without ruining the fun with spoilers, See How They Run presents a more complex argument towards the murder mystery genre and allows its villains to find sympathy in their pain and actions. Without trivializing the comedy of the film and the enjoyment audiences have towards this genre, the film presents a mature take on enjoying the pain of others that gives the film a bit more depth than one might expect.

While the climax of the film's mystery is strong, the road there is easily the biggest struggle for the feature. Rather than keeping characters in a claustrophobic setting where audiences can take multiple ideas in at the same time, See How They Run offers a more restrictive view of the investigation. It is hard to not to be aware of what narratives the film is pushing and the feature doesn't give enough information for the audience to really be able to chew on the facts to develop their own thesis. At no point does the mystery have many meaningful twists or turns with most of them being roads to a punchline. It isn't that the mystery is terrible, but rather it simply doesn't have the craft or thought as the other recent high spots of the genre.

While the film can overcome this largely due to its humor, it also helps that the technical craft of the film is as strong as it is. The production design is stunning with Amanda McArthur bringing this lavish period piece London to life with glorious detail. The cinematography by Jamie Ramsay also shows a rather careful craft almost feeling like a Wes Anderson project at points. Between this and his work on films such as Moffie, Living, and Mothering Sunday, Ramsay is quickly developing a wildly strong resume for himself.

See How They Run is a unique whodunnit. Both playing into the genre while also pushing back in a meaningful effort, the film finds a captivating final thesis with plenty of fun along the way. Even if the feature won't go down as the most consistent or complex effort, especially when it comes to the development of its mystery, it will undeniably be a fun time at the cinema for anyone craving some murder mystery fun.