it won't be the

​end of the world:

save yourselves! ​movie review
​
​by carson timar 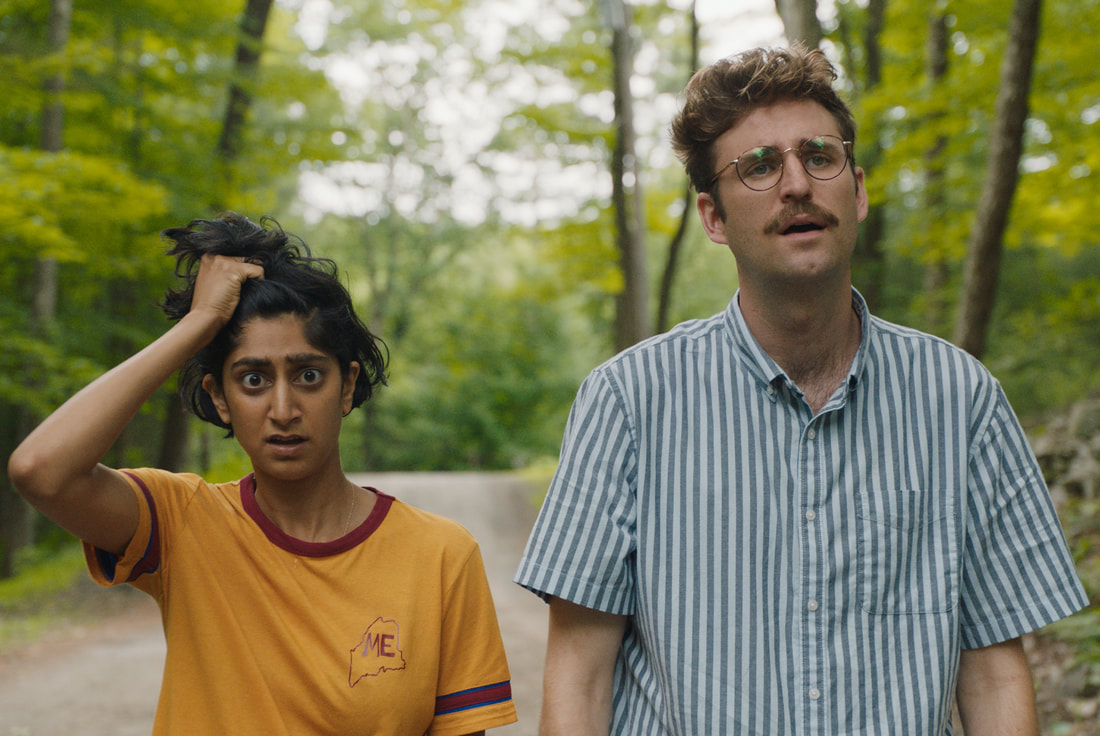 For many, the act of disconnecting from technology can share similar sensations to the world ending. This is the case for the young couple of Su (Sunita Mani) and Jack (John Reynolds) who push themselves to go on a nature retreat completely free from technology to find themselves and break out from a rut they have been in both individually and together as a couple. During this retreat however, more and more things start to seem off and it is realized that the week they decided to put down their phones was the same week the earth happened to be invaded by aliens, leaving the two young protagonists to fight for survival. As naturally seen in this set up, Save Yourselves! is a refreshing and fun comedy that is able to mix legitimate social commentary with smart humor to great results.

Whenever a film is attempting to capture everyday life, it immediately walks a tightrope of comedy above a deadly pit of cringe and forced humor that ultimately does nothing for the audience. It is because of this that audiences will breathe a heavy sigh of relief when it is quickly realized that the comedy found within Eleanor Wilson & Alex Huston Fischer's screenplay for Save Yourselves! perfectly finds the balance between absurdity and reality to be one of the most enjoyable films of the year. The film lovingly pokes fun at modern day society in a matter that feels not only feels natural but also legitimate. The society that Save Yourselves! points to actually feels like the real world not just in comedy but also emotion.

Cinema has often used mid life crises as a catalyst to push characters to seek discomfort and break down barriers to go on various levels of adventure seeking a deeper fulfillment out of life. The rut that Su and Jack find themselves in will stand out as hauntingly familiar for plenty of audience members especially in the stagnant circular motion modern world events have trapped many individuals in. Where not only does the film find an honesty within how it paints the struggles of living in modern day society and the effort it takes to disconnect from aspects of it such as technology, but it also finds an honesty in the beauty that can still be found in the world. In the sweet spot between Su and Jack going on their retreat and discovering the truth to what is happening to the world around them, the film has multiple surprisingly subtle scenes that stuck out as thoughtful pieces of legitimate beauty,

Save Yourselves! largely sets itself up as an intimate indie drama only to then turn those expectations on their heads becoming a sci-fi survival thriller. The most shocking part of this transition is how little it bothered the effectiveness of the film. Due to a continuation of the smart writing featured at the beginning of the film and highly original ideas when it comes to aliens and the act of an alien invasion, the film seamlessly transitions from drama to survival thriller without sacrificing any of its fun or craft. This is not an easy identity for a film to carry but Save Yourselves! does this incredibly naturally only further speaking to the skill of its screenplay.

Not only can this be contributed to the film's screenplay but the performances from Sunita Mani and John Reynolds also have to be looked at as leading factors to the effectiveness the film was able to find. Similar to the complex identity the screenplay had to carry, the identity of these characters both as comedic vehicles enhancing various aspects of society and as individuals fighting for their lives is one that naturally contradicts itself and easily could lead to annoying performances that feel all over the place. Yet again, this is an area where Save Yourselves! excels. Again perfectly blending absurdity with reality, the performances that both Sunita Mani and John Reynolds find are over the top yet also perfectly believable.

When it comes to negatives within the film, the list is limited. Beyond some frustrating decisions made by the characters which is to be expected from any sort of survival film, the main area where it feels like the film could have used some more work is the ending. Where far from terrible, it does feel out of the blue as if the film needed a quick wrap up that ultimately feels less effective and powerful than the film clearly intended it to. Still, the strong visual effects at least make not just the ending but the aliens overall carry a level of inspiration to them that shines even if the emotional catharsis isn't fully found.

With both a theatrical and VOD release on the horizon, there is little excuse not to check out Save Yourselves!. The film easily stands out as one of the best comedies of the year and honestly is a breath of fresh air for the genre. This is an inspired effort that both has the laughs and heart needed to be something special, and for anyone looking for a fun thing to watch one evening this is an easy recommendation.
​