a liberal and a republican 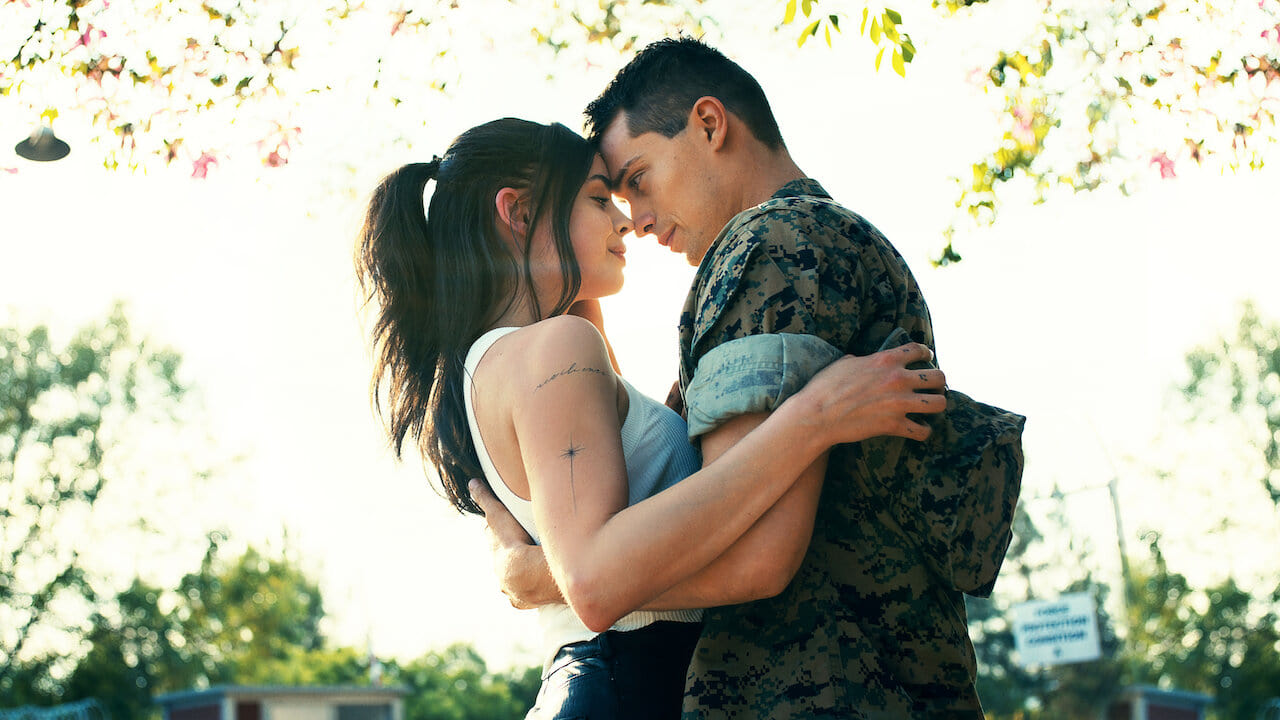 While Netflix's plan when it comes to original features includes all genres, it is obvious that the streamer has prioritized that of romance. With countless romantic films coming out each and every month, the range in quality is only natural. While some features impress with their charming hearts and strong chemistry, some fail. Searching at the bottom of this barrel will produce final products like that of Elizabeth Allen Rosenbaum's Purple Hearts. Liberal song-writer Cassie (Sofia Carson) and republican Marine Luke (Nicholas Galitzine) might be completely opposite on paper, but have one massive similarity: desperation. Cassie is in desperate need of insulin but her prescription doesn't cover enough for the month leaving Cassie no way to receive the medicine she needs to survive without spending a fortune of wealth she doesn't have. Luke has turned his life around from a previous life of crime, but still has debts to pay with the threat of being killed weighing on his mind. Both might disagree and dislike the other, but both agree to get married in order to get extra money to solve their problems. As time grows, a more genuine romance blossoms, and a terrible film is created.

Right off the bat, the romance in the film is terrible. While the writing does these two no favors, both Sofia Carson and Nicholas Galitzine fail as leading performers. Cringy and awkward with not even the slightest shadow of chemistry, at no point is there any warmth or love felt within this pair. Carson has her moments but never is able to craft a persona that feels natural or real. It constantly feels like she is switching between a few different cliched identities with little to no cohesiveness. Galitzine bumbles through scenes like a deer in headlights. Every scene that requires depth or emotion from the young actor suffers from a total absence of emotion and charm. Genuinely these two feel like parodies of their own characters which is almost tragic considering how serious the film is taking itself and their romance.

The screenplay is equally awful. While the entire premise and romance is written terribly, the insertion of politics is clearly one of the reasons this outing is as disastrous as it is. At the forefront of Purple Hearts is the story of two complete opposites on the political scale falling in love. Both characters are written to fulfill as many stereotypes about their side as possible which only goes to fail each side from the realistic nuance one could have with a story like this. It is grating as Luke and his conservative family insult people by calling them "libs" and being grossed out by pride flags. It is grating as Cassie randomly burst out with anti-military speeches and causes a scene at every turn due to her political beliefs. This harkens back to one of the primary issues plaguing the military genre. This genre time and time again allows itself to normalize and play ignorant towards sexism, homophobia, racism, and more with the focus instead, going towards the deeper hearts of the individuals who are behaving in this manner. It plays into these military stereotypes and attempts to justify them which is ridiculous.

Not only does this ultimately hurt the perception of the military, but it also is incredibly frustrating and offensive to those being attacked. There is no reckoning or focus given to these lines time and time again which is disturbingly lazy. In Purple Hearts, this is clearly present with Luke even being introduced by yelling at Cassie for being upset at clear sexual harassment. There is no reason these characters need to be problematic and there is especially no reason that the film has to overlook these problems. To compare the political sides within Purple Hearts and act-like actions like this are simple quirks that need to be overlooked is beyond reductive to the current political moment. What could have been a poignant subtle expression of the issues with the current political situation becomes a gross miscalculation.

The basic filmmaking is also terrible. The film drags horribly with an awful sense of pacing and structure. The cinematography and editing feel cheap with the entire project feeling more like a made-for-tv soap opera than a cinematic feature. This falls right in line with the worst-produced Netflix originals like The Kissing Booth or A California Christmas. Even those films at least seemed to accept and understand their role in the algorithm, Purple Hearts clearly thinks it is doing way more than it is, causing the feature to feel almost embarrassingly unaware of its own existence.

There is no way to sugarcoat or ignore the truth, Purple Hearts is easily one of the worst films of the year. Failing in every aspect with a frustratingly problematic screenplay, horrendous performances, and cheap filmmaking; there is almost nothing to like or respect about this project that is sure to be lost to the Netflix algorithm within a week.