Where the classic Disney Animated Films are known for their family friendly entertainment, many have been revalued for their dark themes with one of the largest being looked at again being 1940's Pinocchio. Following Pinocchio (Dick Jones), a wooden marionette who comes to life at the wish of his creator Geppetto (Christian Rub), the film shows Pinocchio's adventures around the human world alongside a cricket named Jiminy Cricket (Cliff Edwards) who has been named as Pinocchio's conscious. Where there is an undeniable charm within Pinocchio, the film overall suffers from a lack of engaging narrative as it wanders without purpose to a frustrating amount. 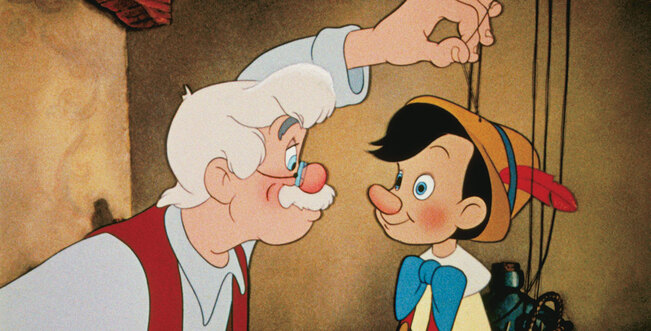 If it wasn't clear from the set up, the world that Pinocchio is one of fantasy and wonder. With magic around every corner, the film naturally has the opening to play around with no concern for practicality which remains one of the freshest details of the film. From animals walking around among people to Fairies flying to earth from the moon to whales which swallow entire ships. The "yes, and" mentality that the film takes on is one that naturally leads to fun and adventure. Where none of the ideas stand out as overly revolutionary in a 2020 context, it is clear that the film was pushing boundaries and not holding itself back in the slightest which is something easy to appreciate. Not only is this clear from the world, but also in the animation. Not only do the animators bring this chaotic world to life with stunning classic Disney animation, but the film served as a groundbreaking film for the art of animation which was still highly experimental in many ways. From how the camera moves through the town to special effects taking more movement and effort than ever before, saying Pinocchio was an inspired effort would be an understatement and this effort clearly pays off.

Not only is the animation diverse, but it is whimsical. From the standout design of The Blue Fairy (Evelyn Venable) to the life given to the world and its characters, the world of Pinocchio is incredibly well brought to life. The same can be said about the vocal performances throughout the film. Actors like Cliff Edwards and Christian Rub easily give some of the most iconic performances from Disney's early animated history giving their characters distinct personalities. If there was one weaker performance however, it would be that of Dick Jones as the titular character. Where his performance is far from terrible, he clearly lacks the same level of personality as those around him and his high pitched tone can become grating. 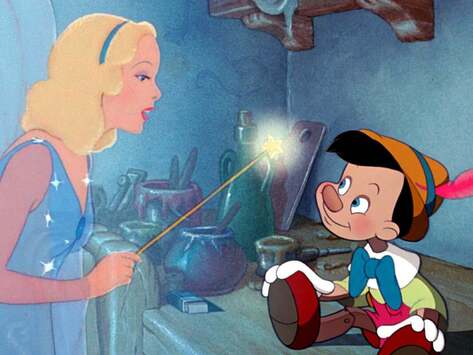 Where these elements give the film a strong personality and plenty of fun material to work with, the finished product is undoubtedly held back due to its pacing and plot structure. Rather than creating a compelling narrative, Pinocchio creates a series of vignettes showing the characters deal with various consequences for its 88-minute runtime. Even with a shorter runtime, this plot structure drastically hurt the audience's ability to become captivated by the film's story which where dark at times, always remains generally shallow. What is even more confusing is the message within the film, by separating Pinocchio from his conscious, the film finds an easy excuse for the character going against logic and reason which not only can feel frustrating as it gets him into bad situation after bad situation, but also leads to a message that feels misplaced especially for children. Lacking a conscience, Pinocchio immediately becomes a character that children cannot relate to and if anything, the film shows that not listening to your conscience will lead to no real consequences.

When mixed with an extremely weak set up and conclusion, Pinocchio quickly becomes a film that is a completely respectable passive viewing experience that ultimately drags and fails to fully work as a film that audiences can fully engage with and focus on. Where a technical marvel, it is clear that the film needed a better screenplay to fully hold up as an all out masterpiece, but for a 1940's Disney Movie, it remains watchable and perfectly acceptable.