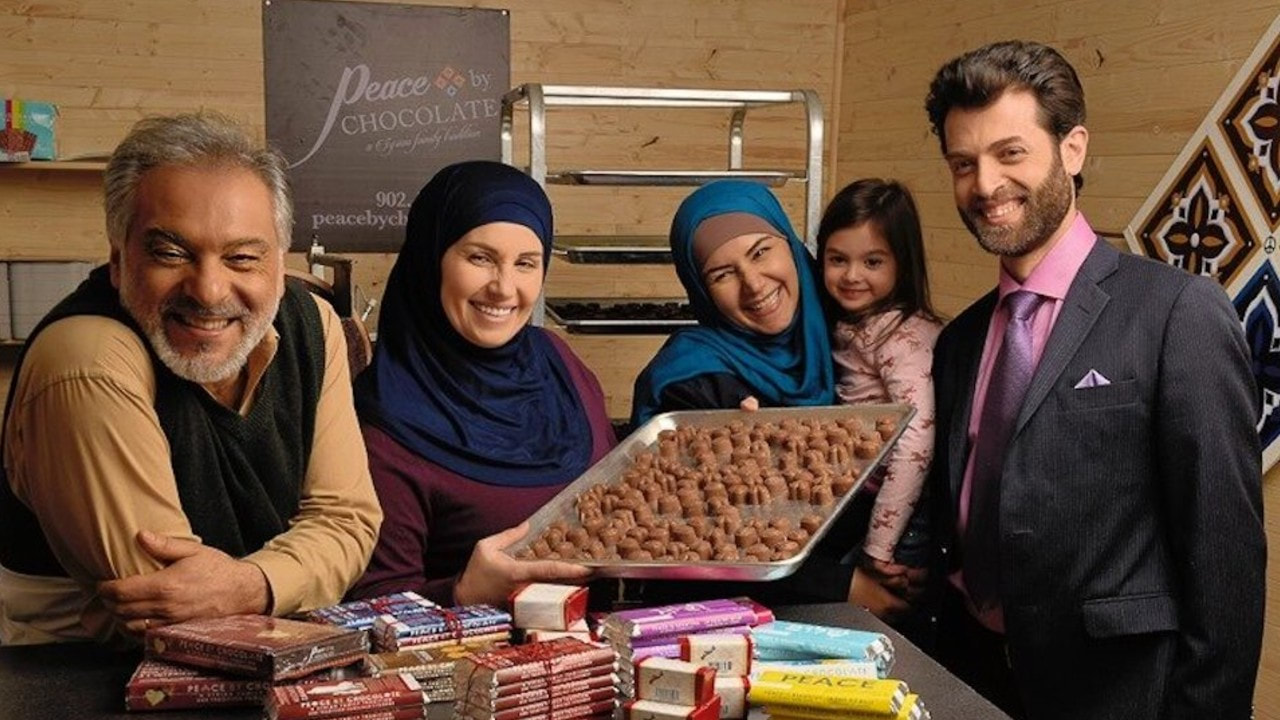 With immigrants becoming the center focus of major political debate, it has become concerningly easy for some to overlook the humanity in this discussion and instead look at these individuals risking everything for a better tomorrow as numbers in a statistic. Screening as part of the 2021 Tribeca Film Festival, Jonathan Keijser's sophomore feature Peace by Chocolate dramatizes a real-life story of immigrants following their dreams and dealing with the trials and tribulations that follow the experience. Escaping a war-torn Lebanon; Tareq Hadhad (Ayham Abou Ammar) and his family find their way to the small Canadian town of Antigonish where his father Issam (Hatem Ali) hopes to continue his passion of running a chocolate factory.

Even with the clear emotional depth and political relevance found within this plot on paper, for better or for worse, Peace by Chocolate feels more like a surprisingly good Hallmark movie than one would expect. Where this comparison is in no way meant to negate the deeper emotion found within the feature, the presentation of the characters and story within Peace by Chocolate often feels more clean and crafted than one would expect. The drama all feels rather safe and there isn't a single moment that really feels like it is taking a risk that while not a negative, does hold the film back from striking as powerfully as it possibly could. While this might feel a bit disappointing to some who go in expecting a much more gritty drama of the human spirit being tested, it does set up a rather perfect runway for the larger theme of family which is at the center of the feature.

Instead of simply focusing on the negative sides of the perspective being captured, Peace by Chocolate lives within the dreams of the family that is being focused on and the love they share for each other. For how much they can get on each other's nerves, they are also the only individuals they truly have in this community which they struggle to understand and connect with. This barrier is shown incredibly effectively throughout the film and is the main source of conflict that is found. From more on the nose scenes like Issam having a troublesome relationship with a local dessert shop owner to more thought-provoking moments like their struggle to get a loan without interest as due to their religion they can't accept one that has an interest, Peace by Chocolate clearly is elevated by the authentic emotions and truths of this experience which is injected into the film due to it being a true story. It is impossible not to root for these characters and even if no moment feels truly haunting or groundbreaking, it is at least overall effective.

This success comes not just from the story but also the performances. While Hatem Ali is quite charming as the inspired yet also quite quirky dad, Ayham Abou Ammar is genuinely quite fantastic here. Giving what is easily the best performance of the film, every truly powerful moment within the film comes because of his emotional power and vulnerability that strikes with an authentic force of pain. For a film that overall feels rather safe, it does say something that his performance which at times does test this is able to fit in so naturally with the rest of the feature and never take away from the lighter heart it carries, instead enhancing it.

While sure Peace by Chocolate might not be the most shocking or devastating feature in the world, the humanity within it feels undeniable. The characters are charming and there is enough conflict to force the audience to feel empathy and understanding for what they are going through. While the film might not be something that demands to be seen, it also is undeniably a good watch that if one gets the chance, makes for a rewarding viewing experience.