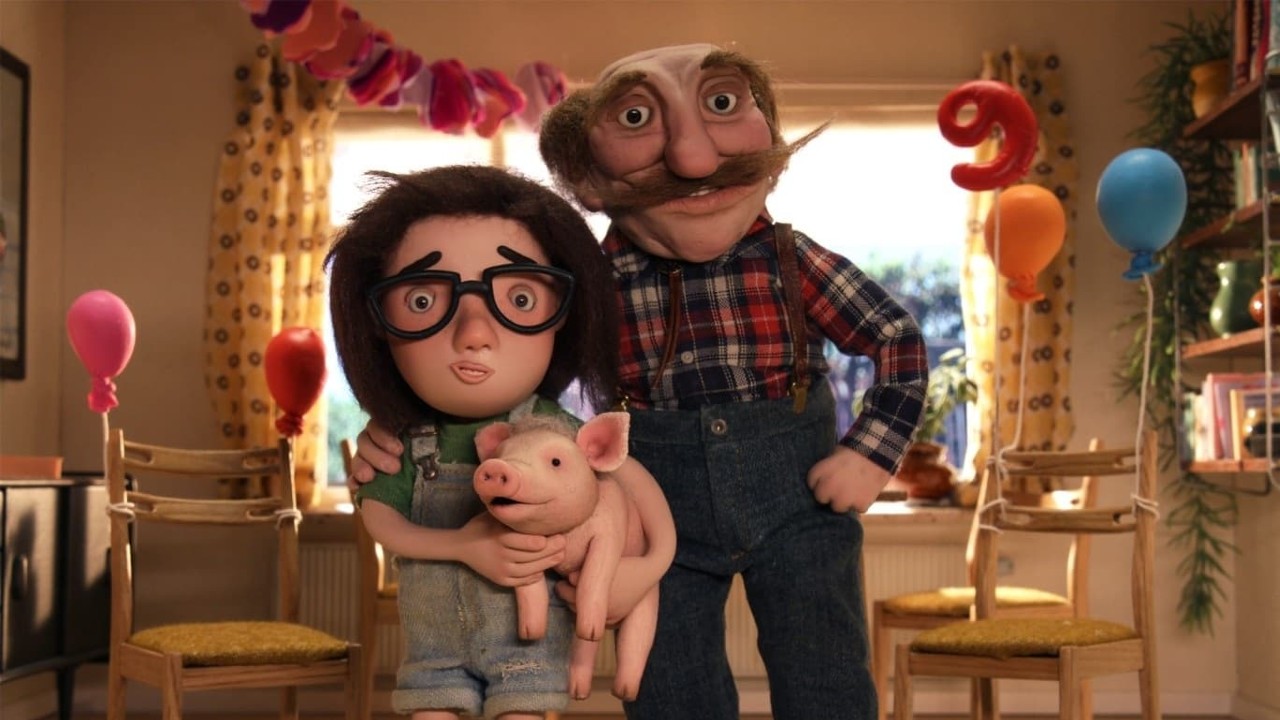 One of the growing modern conversations within society is that of the meat industry. With both the processes and results of the meat industry being exposed, many have turned to vegetarian options and have started to view meat in a much different light. As with every conversation within society, it would only be a matter of time until this idea was explored within cinema. Screening as part of the 2022 Animation is Film Festival, Mascha Halberstad's Oink is exactly this. Using stop motion animation that took years to complete, Oink tells the story of a young girl named Babs (Hiba Ghafry) whose grandfather moves back in with the family after abandoning his daughter many years ago. The relationship is tense but he eventually finds his groove in the family unit and befriends Babs, even buying her a pet piglet as a birthday present. While Babs struggles to see the negativity that her mother does in the man, she is unaware of his plan to cook the pig and use it in an annual sausage contest which he is returning to after being banned for 25-years due to an allegation of cheating and a physical fight.

Oink is a film that on the outside presents a charming tale of a young girl and an adorable little piglet that is true to part of the film. There is a wonderful sense of childhood spirit and fun as Babs gets into various sorts of trouble and engages with the world as she is growing up. Babs is just on the cusp of really starting to grow up and the conflict between her mother and grandfather provides a worthy catalyst to Babs starting to understand the complexities of individuals and the relationship one can have with them. While a fantastical comedic drama, Oink is also in many ways a coming of age film that succeeds in creating a worthwhile scope. It also should be said that while some of the pig humor is somewhat basic, seeing a pig poop and fart is only entertaining for so long, the character design is adorable and by the end the audience has come to love the creature just as much as Babs.

This love for the pig and the personality of the creature is why the drama towards the end of the feature connects so well. While on the outside Oink seems to present itself as a lighter cinematic experience, there is a deeper venom to the film that is both well thought and well executed. Specifically in the film's conversations regarding the meat industry, it is hard not to get caught up in this emotional tale that sees this cute and charming creature quite literally get threatened with murder. It is heartbreaking and disturbing in a package that is digestible for both adults and children. Without ever reducing or hiding the situation, the film presents the issue in a manner that won't ruin childhoods and it feels like one of the few properties to be explicit while still being accessible regarding this problem.

The animation is also fantastic. A 100% passion project, there is a tremendous amount of love and care given to this world and bringing these characters to life. While the effectiveness of the character design will be subjective depending on the taste of the audience, the world is incredibly well developed with sets feeling natural and tangible. There is not a single scene where the animation looks off and the imagination in creating various effects are clear. Oink is yet another example of this stop motion genre being used to wildly strong results and in a time where the expected standard of animation has become incredibly high, it is continually these inspired efforts that end up sticking out rather than the animation simply trying to be as realistic as possible. Style and craft is one of the brightest parts of the animation genre and it is films like Oink that wear this identity on their sleeves.

Oink is a lovely film. Carrying both a worthy sense of childhood innocence alongside a meaningful and important deeper context, the film is accessible and enjoyable without sacrificing its poignance or message.
Become a Patron!