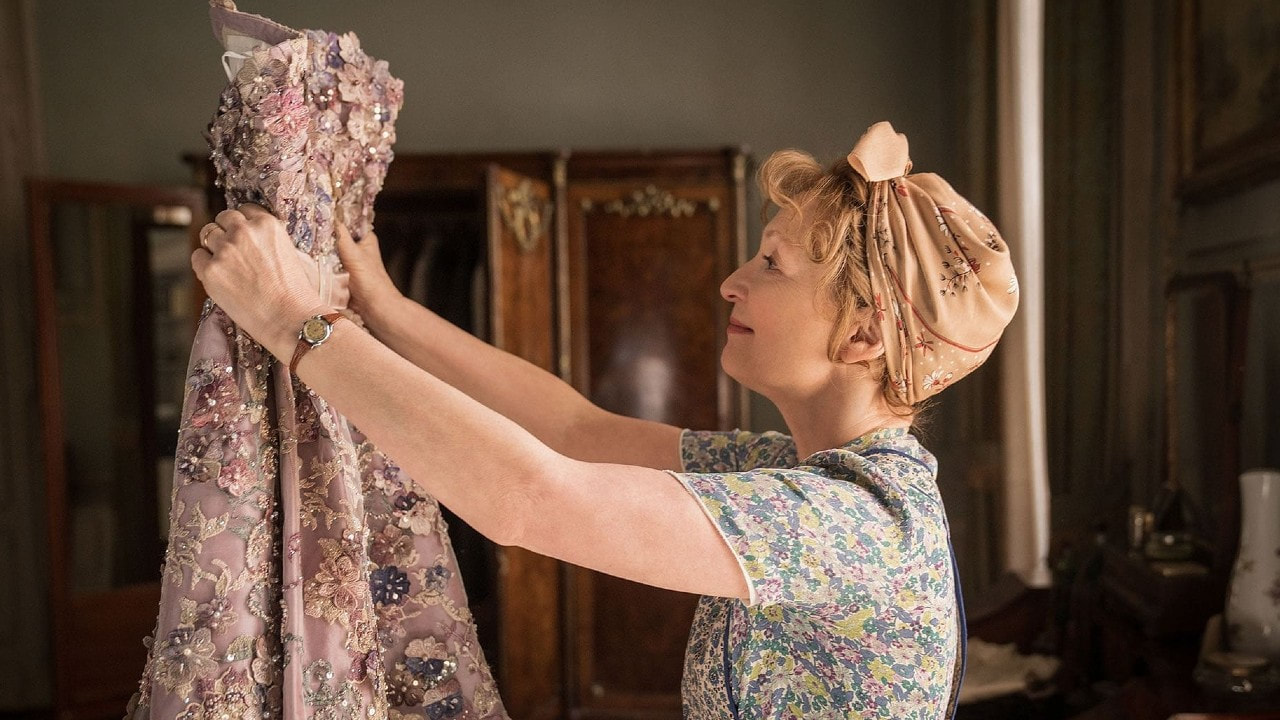 While film might often thrive on its ability to be dark and harrowing, there is also an undeniable space for kind and charming cinema meant to restore the audiences' hope in the world around them. Anthony Fabian's new feature, Mrs. Harris Goes to Paris, is just this type of film. Set in 1950s London where the charming Ada Harris (Lesley Manville) works as a cleaning lady following the tragic death of her husband in the war, Mrs. Harris Goes to Paris sees a tale of desire and struggle. In the midst of Harris not just cleaning houses but also just barely being able to hold together the lives of both her clients and her own, she finds herself face to face with a Christian Dior dress. Despite the high cost, Harris falls in love with the artistry behind the dress and she decides to use what little money she stumbles on to fly to Paris to get her own dress.

If there is one word to be used to describe Mrs. Harris Goes to Paris, it would be "magical". Films of innocence and hope can often come off as nauseatingly predictable and cheesy yet Mrs. Harris Goes to Paris thrives in this identity. Largely thanks to the lead performance from Lesley Manville, the charm of Harris is infectious and one cannot help but root for her even as the odds are stacked against her. Being out of place in nearly every way from the traditional Christian Dior customer, Harris is torn apart and shut out but still finds her way in with a smile on her face even towards her worst enemies. This works largely due to the layers given to the characters throughout the film.

Harris is not just some innocent old woman but is also a woman dealing with grief. She has a flare and attitude that commands her good morals to shine and touch everyone around her. This is not a delusional protagonist trying to show the audience that the world is nothing but beauty, but instead, this is a protagonist trying to show the audience that even through the darkness there is a light to be found. This completion reaches nearly every character the audience meets. From the villainous Claudine Colbert (Isabelle Huppert) who is continually against Harris in the name of trying to keep the brand image of Dior strong to the model Natasha (Alba Baptista) who befriends Harris in Paris, every character is given their own brew of complexions to help them stand out and hold a weight

Perhaps most surprising of all for the film is just how deep it can go in its thesis. While so many films similar to this get attacked for being too simple and clean, Mrs. Harris Goes to Paris a staggeringly worthy voice that confronts some major questions. The biggest of these questions is a debate on worth. From the job one works to the dress one wears, there is a value placed on nearly every piece of human identity yet how worthwhile are these judgments? Is a cleaning lady any less important than a famous model? Is an old woman any less complex than a young man? Is an expensive dress worth more than cheap clothes? These questions find their way into the plot with a stunningly poignant voice that doesn't necessarily give the easy answers one might be expecting. The film further questions this using the works of  French philosopher Jean-Paul Sartre. To see this much depth in what so easily could have been a rather hollow feature only speaks to the inspiration given by the filmmakers behind the project.

If there had to be one area where the film does struggle it is the beginning. Before Harris travels to Paris, the introduction to her and her world is rather fast and messy with a plot that is somewhat hard to follow. Without the context of quite minutiae things such as the London lottery at the time, the audience easily can be left behind by the film that really could have used a cleaner edit in these starting moments. Luckily,  Harris does travel to Paris quite quickly and nearly everything from that point is perfection. This accumulates into an ending with a rewarding climax that again goes far and beyond the more traditional and basic conclusion, one might be expecting from a film of this nature.

In nearly every way, Mrs. Harris Goes to Paris is magical. While the film is charming, it is also a rather deep feature that leaves the audience with plenty to chew on and consider. It is without a doubt one of the shining spots of the 2022 Summer movie season and truly feels destined to become one of the largest hidden gems of the year overall.