As the anime world searches for who will be the next Hayao Miyazaki often giving attention to directors like Makoto Shinkai and Mamoru Hosoda who similar to Miyazaki has mixed drama and fantasy into memorable filmographies. Where these directors are the ones getting the mainstream attention, there is a director on the sidelines that has danced with becoming a mainstream name turning out one of the most prolific and unique careers in anime history. From anime series to feature films, Masaaki Yuasa has continually pushed the boundaries of both animation and storytelling which can especially be seen in his 2004 debut feature Mind Game. Following a loose story of a young man named Nishi (Koji Imada) who decides to become bolder leading to him getting him and his friends into multiple bad situations, Mind Game is peak Yuasa with the film throwing away the rule book for how to make animated features and becoming something entirely unique. 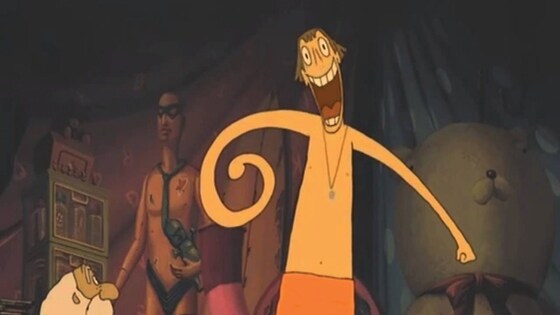 The immediate thing to stick out from Mind Game especially if this served as an introduction to the work of Yuasa is the animation. Even compared to the newer works from the director, Mind Game not only plays around with color and linework but also with animated styles and mediums. From incorporating real photos and videos into the animation to batshit insane designs taking the visuals nearly into parody at times. The storytelling is equally as bizarre. Taking the appearance of almost an anthology film, Mind Game has a very loose story jumping around from conflict to conflict with sprinkles of experiences with god and other divine moments throughout. Yuasa himself described the storytelling in the film as "a bit wild and patchy"

Due to this though, the actual depth and messaging within the film can feel a bit more empty than Yuasa's later works for example. Mind Game undoubtedly suffers from a focus on style over substance as the film trades a deeper narrative and layered plot for creative sequences and strong visuals. With that said though the film is such a unique and engaging visual experience that at least on a first viewing the film never feels dull. It is impossible to not get sucked into the sheer artistic experience that this film is with Yuasa bringing such a unique and refreshing direction to the film. To see a piece of media using the medium of animation with seemingly no restrictions or fear to experiment is so refreshing and sadly hasn't been seen to this level since.

Where Yuasa's later films and anime series would become more and more well rounded and mature trading in some of the chaos for more well thought out and impactful stories, looking back at his directorial debut it is fascinating to see what happens when Yuasa goes full Yuasa without much concern. Even if the film fails to be extremely impactful, it is such a unique and memorable viewing experience that Mind Game has to be considered essential viewing especially for anyone who enjoys unique animation