For whatever reason Ari Aster films have a way of feeling like a major event, even with his directorial debut last year Hereditary that was a moment in film where everyone was talking about that one movie and the hype was beyond belief. It is no shock after how much Hereditary delivered that Midsommar also had this degree of hype. Dani (Florence Pugh) is a college student who is still dealing with the tragic death of her family which has not only put her in a terrible mental state but added a layer of pressure and complication to her relationship with another college student named Christian (Jack Reynor). Months after her loss both students get the chance to go to Sweden to witness a special midsummer celebration in the small community named the Hårga which is where their friend Pelle comes from. They decide to go and quickly seems things to be off, over the 9-day drug filled festival more and more panic sets in as things get darker and darker. Similar to Jordan Peele earlier this year with his sophomore film Us, I was really interested in this movie. Despite not being such a stan for Hereditary as so many others were with plenty crowning it the best film of the year I do think it was really well crafted and engaging standing out compared to the mass of shitty horror films released every year. This was going to be the test for Ari Aster, would he be able to keep the craft and skill he brought to Hereditary into a whole new project or would it turn out that he simply found the perfect project to start out on and would end up being a one hit wonder? Coming out of Midsommar I have to put it clearly below Hereditary again very similar to Us compared to Get Out, though I do think this is good enough to prove Ari Aster as a director and make me excited to see what he does next. 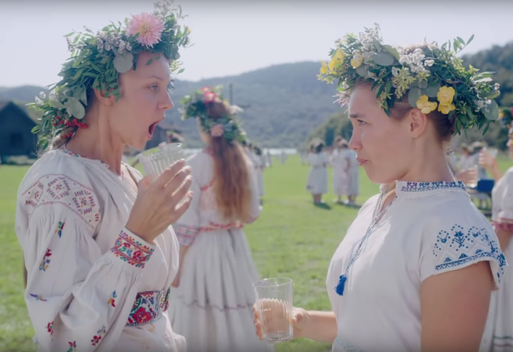 First I must praise Aster for the nerve he had making this film, he decided to go in a completely different direction not just compared to what he did in Hereditary but what the horror genre is at this point. As seen in the extremely unique trailers this movie is not gloomy and dark, there are no monsters lurking in the shadows or Toni Collette's in the corners of the room this time around. Instead, this is a bright film, even taking place in Sweden where the sun at this time of year rarely ever sets. This visual design is bold and fresh, this was a huge risk for anyone to take much less a newer director but I think it really paid off. Not just the lighting but the overall visuals of this movie really worked for me, Pawel Pogorzelski has stepped up to main Cinematographer from being Director of Photography for Hereditary and this movie looks great. The way they play with the camera and the visuals of this film does a great job at starting to build the uneasy and off-putting tone this movie wants to shower the audience with. The costume and production design is a fantastic mix of being stunningly beautiful and threatening at the same time. I will also say that I really enjoyed how they visually decided to handle the drug trips in this move, I am always curious how a movie will handle these types of scenes as there are so many ways you can handle them, you can play is straight and just show the people acting weird or you can bring the audience into the trip themselves. This movie is subtle though with bringing the audience into the trips, the visuals are minor and to the side of the main focus, a lot of the time which I really enjoyed and thought was the perfect direction for this movie to take. 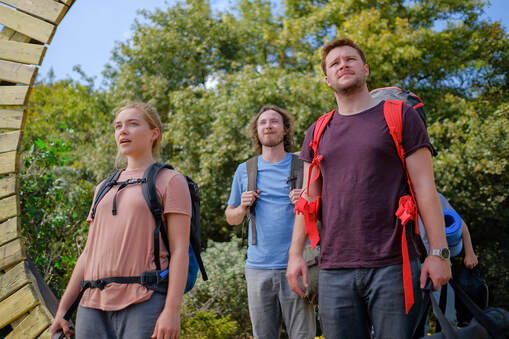 The acting is also getting a ton of love and I can see why. We're sure no one quite lives up to the stunning performance Toni Collete gave in his first film Florence Pugh comes close. Her character is dealing with trauma and mood swings yet it's not like she is selfish or out of touch with the people around her. Despite her emotional breakdowns, she is constantly aware of the people she is with and is thinking about them, she doesn't want to sour their trip but also cannot stop her pain. This is an interesting character and she pulled it off perfectly. I can already see that Jack Reynor is not getting much attention in the conversation surrounding acting in this film but he also does a really good job with his layered character. He is her boyfriend and wants to be there for her but also he is distant, whether you judge him for this or not he has to balance being a bit of an asshole at times while also not being a bad guy and I think he pulls it off quite well. In fact, these two performances I found to be the most interesting aspect of the film that I wanted to discuss, without getting into spoilers here I will say that I wanted and continue to want to hear people opinions on this relationship and who was to blame for where it ended up going. Who was in the right emotionally and were they good for each other at all? Though this is also where I start to find some of my issues with the film.

This is a movie that feels like it wants you to rewatch it, similar to Hereditary and countless other films you really don't know to the fullest extent what is going on in this world and with these characters until the very end and then it wants you to think about it and create your own thesis and ideas of what the story is saying and rewatch it for more clues and evidence with context of what is actually happening. This is another way I feel very similar to this film as I did Us cause they have the same issue, I don't really care or see the depth in what is going on. How they choose to conclude this story answered most questions and unlike other films including both Ari Aster's and Jordan Peele's first films I don't see there is a lot I could gain from further exploration of the movie. Not just about this crazy world they are in over this celebration but also in that relationship between Dani and Christian. We don't see them when they fall in love or through the good parts of their relationship so to judge them and deep dive into their relationship can only produce so much as we lack the context of why these two are together in the first place. Even past them, I will say that this movie did not have the most interesting characters, they all feel pretty shallow and other than Dani and Christian they really don't go anywhere or find a purpose in the plot.
I still feel like overall this movie is well crafted and especially from a technical standpoint, this film is great. The acting is solid and it had all the pieces (again very similar to Us from earlier this year), sadly the story was lacking the depth and engagement needed for me to truly get into it and where I can see conversations on subjects such as grief and love, the movie does not have the depth I feel to really deep dive into those subject beyond a pretty shallow depth. I still overall like Midsommar, I just can't say it is a standout of the year or I feel like Ari Aster's career as he continues making movies. I am excited to see what he does next, I just hope the story will match the technique he brings to whatever his next project might be.