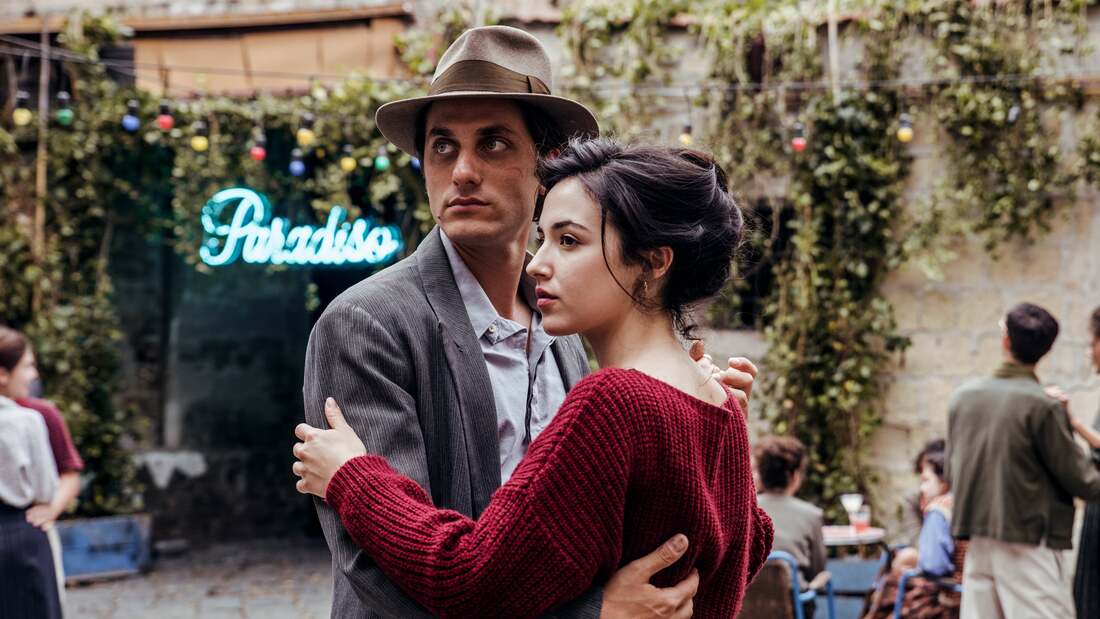 Based on a 1909 novel of the same name by Jack London, Pietro Marcello's Martin Eden captures a unique and moving perspective on the complex and often hostile relationship between the arts, love, and politics. Following the young and hard working Martin Eden (Luca Marinelli) as he attempts to balance his passion for writing and dreams of making a career out of the art with practically having to not just build a life for himself but also the love of his life Elena (Jessica Cressy), Martin Eden is simultaneously a more traditional rags to riches story while also being examination of the tragedy of a struggling dream.

The immediate things that will hook audiences into Martin Eden is the visual design the film takes on. Both in the cinematography from Alessandro Abate and Francesco Di Giacomo alongside the film editing by Fabrizio Federico and Aline Hervé; the film has dedicated its presentation to feeling like a piece of the past. The film is gritty and aged in a sense that not only defines the atmosphere of the film but also enhances the timeless value of its story. Even if the film's plot takes place in a world of the past with clear political events and mindsets of that time, the deeper values and thesis within the film can absolutely be applied to the world today.

Especially for those who are trying to pursue a passion, the journey and struggles of Martin Eden will haunt long after the film's 125-minute runtime ends. The character of Martin Eden is one that is impossible not to feel empathy for. Trying to find his place in the world going against the traditional path in pursuit of true happiness and freedom, Martin Eden is a tragic reminder of the sacrifices and limitations of the modern human experience. Everyone wants to grow up believing they can achieve their dreams but the reality is that this is only the truth for a select few individuals. Ultimately the vast majority of the population will have to sacrifice their dreams for the practical reality of living in a Capitalist based world. This valuing of dreams is one of the great mirages of the human experience and Martin Eden exposes this to a devastating matter. Slowly the character of Eden has to give up more and more of his dream and the audience has to slowly watch this process which will directly reflect onto the experiences many of them have also faced.

Not only is Martin Eden aware of the problems facing the modern human condition but the film is also aware of some of the possible solutions. Specifically when it comes to politics, Martin Eden engages in a complex conversation surrounding socialism and political escape both in mindset and practicality. The film isn't obvious or simple, the conversations surrounding politics are overdetermined as it again looks at the actual practicality of revolution and the sacrifices needed to make change. Ultimately the film final thesis rests in the question of how much one is willing to give up in order to achieve their goals. In the modern world there is a limited amount of time one has and somewhere between the arts, career, love, and political aspirations there has to be sacrifice. Does one give up money to pursue the arts and political beliefs? Does one give up fighting for political change to have more time with a loved one? Does one give up on a true love to make money and build a career? The world within Martin Eden is unfair, but most painful of all is that it is honest.

This struggle is brought to life by the central performance coming from Luca Marinelli who is an immediate standout from the picture. Genuine and filled to the brim with passion, Luca Marinelli gives one of the best performances of the year. Both having to exist in a stylized period piece while connecting to the modern emotional core of the audience, Marinelli is immediately put into an extremely complicated spot yet the actor impresses wonderfully with his inner complexion and clear inspiration. Throughout the film, Luca Marinelli loses himself in the role of Martin Eden truly living and breathing the character to life. Rather than feeling like an actor playing a character, it simply feels as if the character is alive and the audience is watching them live their life.

Not only is this largely due to the performance behind the character but also the screenplay. Where the slow pacing and more meditative approach to storytelling within the feature will undoubtedly alienate some audiences who appreciate a more active take on building drama, for those who like slower European cinema Martin Eden will be a resounding success. The narrative and screenplay read like poetry making the admittedly slow and drawn out pacing of the film feel captivating. Where the visual style will be what hooks audiences, this style is going to be what defines if the film either sticks with audiences or loses them over the course of the longer runtime that the film carries.

For some, Martin Eden will be a painfully boring and dull experience with nice visuals, but for others this will stand as one of the most engaging and powerful cinematic expressions of the year. Even if the specific plot details are dated pieces of the past, the thematic weight of Martin Eden is painfully relevant and all too relatable.
​