the song of the soul: 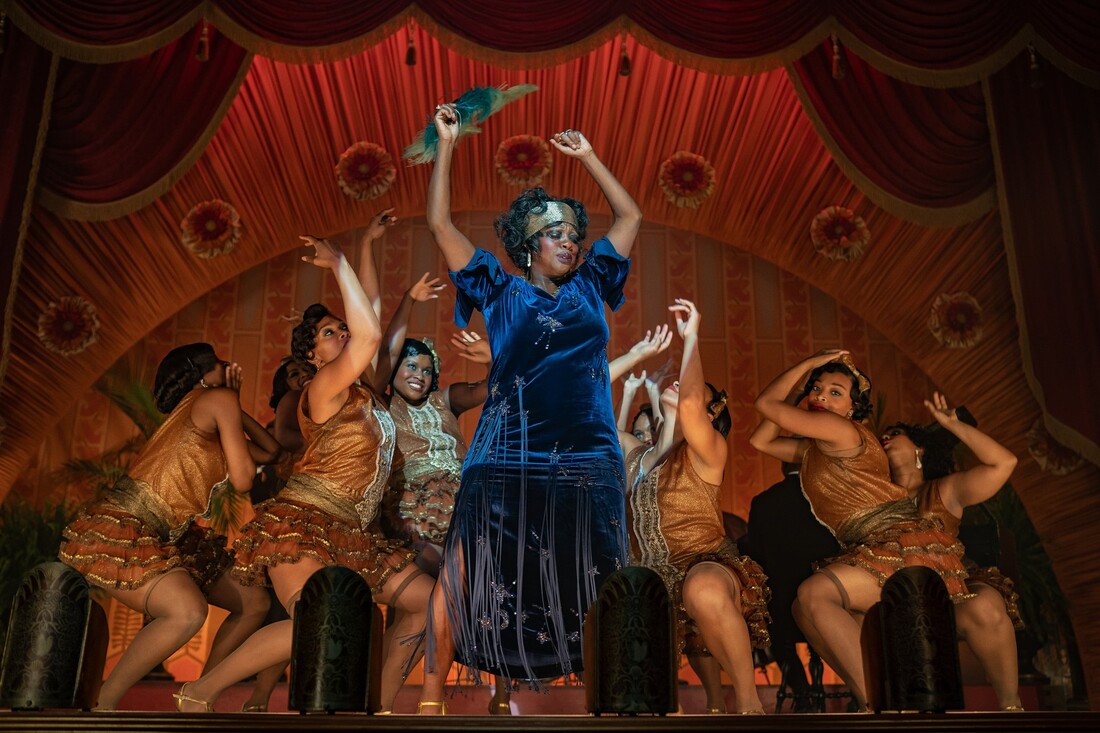 Coming as one of the major contenders in the 2020-2021 Awards Season, George C. Wolfe's Ma Rainey’s Black Bottom is a living and breathing collision of warring ideals regarding the soul of the Blues genre and the black experience. Where the film is undeniable in its tone and atmosphere alongside its sure to be iconic performances from Viola Davis and Chadwick Boseman, the film's screenplay from Ruben Santiago-Hudson is where the film starts to struggle.

The immediate success of the film when it comes to spirit is illustrated from the first scene alone. Bringing the camera from the dark woods into a tent where Ma Rainey (Viola Davis) is performing for a jubilant crowd hanging onto every word of her performance, Ma Rainey’s Black Bottom sets the tone right off the bat. As a period piece, the film feels inspired and full of life. From the back and forth between the characters to the technical achievement which is not just the obvious costume and makeup design but also the more subtle production design, this is a world that feels alive and breathing.

This is felt nowhere more however than the lead performances within the feature. The late great Chadwick Boseman has impressed greatly with his previous filmography but Ma Rainey's Black Bottom is a near-flawless swan song for the actor serving as one of his best roles to date. Emotional yet charismatic, his role as the bright and likable Levee all the strengths of Boseman as an actor. Where incredibly genuine and passionate, he also is simply likable. Whenever the film is focusing on his perspective, the performance from Boseman stands as a breath of fresh air and it is impossible not to be captivated by the personality he carries. Possibly the best aspect of this performance however is the relationship it has to the performance Viola Davis is giving in the opposite lead role. Where the two characters are largely kept separate, both carry the same core with completely different packaging. Similar to Levee, Ma Rainey is charismatic and passionate about her craft yet Davis crafts a performance that feels completely separate from the work of Boseman. They consistently push each other and stand as two opposite sides of a very similar card which creates easily the most intriguing dynamic of the entire film.

It is these two characters in a juxtaposition to each other that gives the film its depth and thesis. Both regarding the Blues genre and their experience as black individuals in a 1920's America: Levee and Ma Rainey have fundamental disagreements. Ma Rainey's Black Bottom finds a conversation comparing tradition to innovation. How much can something change before its identity is lost? Should one push for evolution or let evolution find oneself first? These are questions at the core of Ma Rainey's Black Bottom that are intriguing and without an easy answer. These conversations easily stand as the most engaging piece of the film and give the film the substance it needs, not only being intriguing in the context of the film's drama but also in the ties one can make to the modern world. Unfortunately, this conversation isn't fully realized.

The largest issue within Ma Rainey's Black Bottom is its screenplay from Ruben Santiago-Hudson who is tasked with adapting the story from the original play by August Wilson to the big screen. This original influence is felt throughout the film's 94-minute runtime. From the snappy dialogue to the limited locations, the film wears its original identity on its sleeves but while doing so, it struggles to adapt. Unlike a film such as One Night in Miami, which also is an adaptation from the stage to the big screen, Ma Rainey's Black Bottom fails to find a proper balance between paying respect to the original play and making the necessary changes to make the narrative work in a cinematic setting. The dialogue scenes always tend to go a bit too long with much of the comedy falling flat while the narrative feels confused.

The film distractingly jumps in perspective between Levee and Ma Rainey often without a seeming rhyme or reason. Where on stage this pacing wouldn't be nearly as distracting and the two perspectives would immediately be tied together due to the physical use of the same stage, in the film it feels narratively confusing and lackluster. With the film needing to set up both characters, it also just takes a long time for the narrative to actually get going and once it does reach the more interesting subjects of conversation it never quite feels like it reaches the emotional catharsis it dances with. The actual cast itself beyond Davis and Boseman also feels very lackluster with awkward line deliveries and a clear confused direction which again speaks to the unclear identity of the film as an adaptation. Despite being clearly cinematic, the film doesn't feel like it fully accepts this in its core and tries too hard to capture the magic within the play that simply doesn't make the jump to the big screen.

Ma Rainey's Black Bottom will undoubtedly find a place in history for the two performances at the center of the film, but it is hard to imagine that the film overall will be considered as one of the defining films of 2020. The screenplay and overall direction feel lackluster, ultimately doing a disservice to both the production design and performances from Davis and Boseman which are truly inspired. Somewhere within Ma Rainey's Black Bottom stands a truly special and haunting feature, but this adaptation sadly doesn't find this ultimate payoff even if the film overall is far from a disaster.
​