it's nice to have a friend: 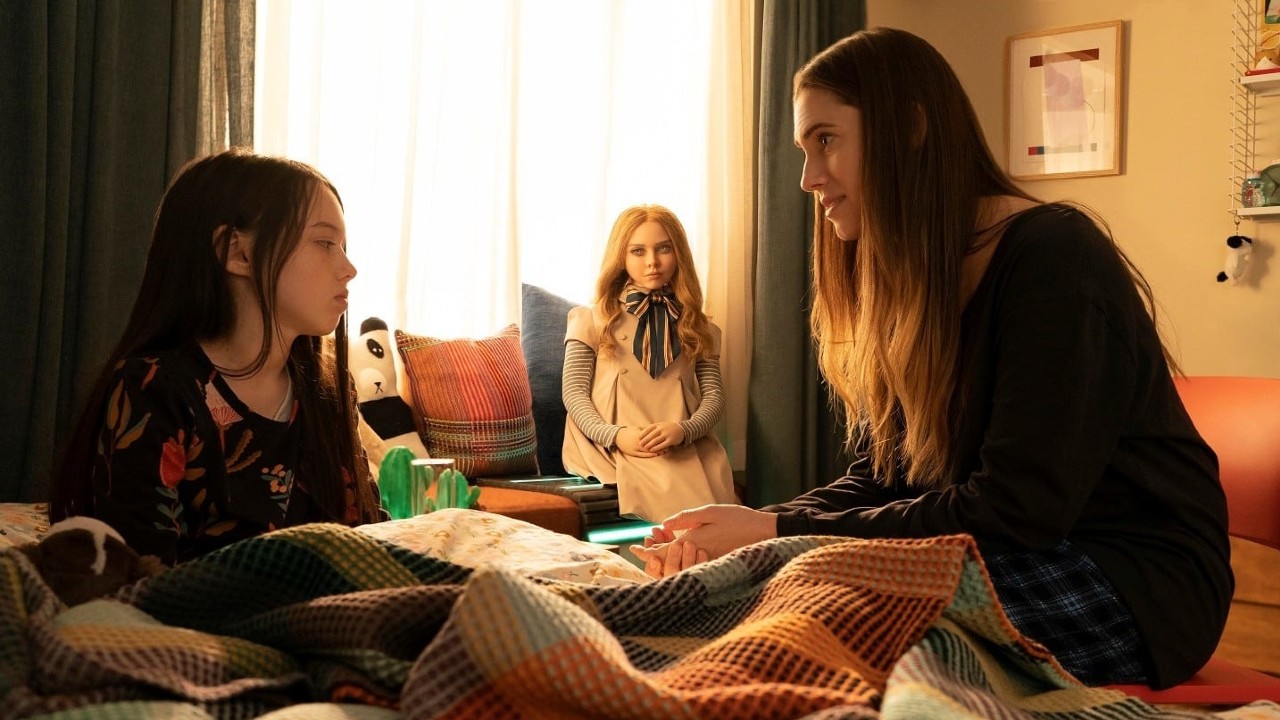 One of the more notable advancements in modern film discussion is the memeification of a number of films each year. Originating often with the first trailer of a film and continuing to the point where these memes and jokes directly play into the eventual conversation surrounding the worth of a project, this concept can be fun but ultimately acts as a disservice to the analysis and cultural response to a cinematic text. While some films might face immediate ridicule due to this status, some greatly benefit from it. The first 2023 release to gain this response is Gerard Johnstone's M3GAN. The newest original feature to come from Blumhouse Productions, M3GAN is a natural fit to gain the appreciation and love of modern audiences with the Sia singing, bully murdering, blonde haired doll being undeniably iconic in presence.

Created by a roboticist named Gemma (Allison Williams), M3GAN, voiced by Jenna Davis and portrayed physically by Amie Donald, is a robot designed to be the ultimate toy. Being able to interact with children and become their best friends with remarkable autonomy both physically and mentally, M3GAN is nothing short of a revelation. This is perfect as Gemma becomes caretaker for her niece Cady (Violet McGraw) after Cady's parents are killed in a car crash. Cady and M3GAN quickly become inseparable, yet a darker side begins to be shown from M3GAN who proves to be willing to do anything to protect and help keep Cady happy and safe.

In the long run, there is no question that M3GAN is going to be defined and remembered for its titular character. While some might be quick to dismiss M3GAN as just being a cheap knockoff of other established characters such as Chucky from the Child's Play franchise, the character does undeniably stand on her own and crafts not just a unique personality, but a unique threat. Rather than just being an error in coding, M3GAN's cruelty comes from a deeper question of morality as she fails to see anything wrong with violence considering she sees that mindset reflected in humanity. While it is hard to say this conversation is ever addressed with much poignance or true purpose, it does at least give the film a unique backbone and thesis to stand on. The film also has a more thoughtful conversation around the unhealthy role technology can have in parenting but again, it is hard to say the film finds many new takes to truly have within this focus.

More important than being morally worthwhile, the biggest goal many held for the project is that it would be fun. The results here are overall met even if the film is far from being revolutionary. M3GAN as a character is great with plenty of fun lines and kills that never feel too restricted by the film's PG-13 rating. The film has its finger on the beat of modern culture with small references and moments such as M3GAN singing pop songs never feeling distracting or forced. These moments blend quite well into the background while still providing the younger crowd exactly what they are looking for out of the film. It should be said though that while M3GAN is entertaining, it never reaches that next level of fun to where it ultimately will be remembered as being one of the most fun viewing experiences of the year. Both the thrills and laughs of M3GAN are undeniably present, but neither success exceeds what has already been accomplished within the horror genre within even the last year.

When it comes to the humans, M3GAN is most notable for the performance by the young Violet McGraw who is wonderful as Cady. McGraw shows quite a bit of strength and emotional control playing this tortured soul who has to slowly come out of her shell to M3GAN while also staying hostile towards the others around her. McGraw feels natural and impressive here and has solid chemistry with Allison Williams who is also a clear highlight. While her character is clearly flawed, Williams portrayal of a young woman in way over her head who is just trying to do her best has a strong emotional core and works well in the role of protagonist. On the side, it also should be mentioned that Ronny Chieng is memorable in his execution of the stereotypical rich businessman who sees only the cash that could be made from M3GAN without caring about any of the flaws or warnings.

While M3GAN might not do much to reinvent or exceed the expectations of the modern horror genre, the film is undeniably fun and is strong in how it pulls off even the film’s more simple ideas. M3GAN is an instant horror icon as she slashes her way through a passable horror plot that does undeniably have some deeper ideas to sink its teeth into. For those looking for a fun horror outing at the theater, M3GAN is an easy recommendation but expectations should not overhype what the experience overall is going to be.
Become a Patron!