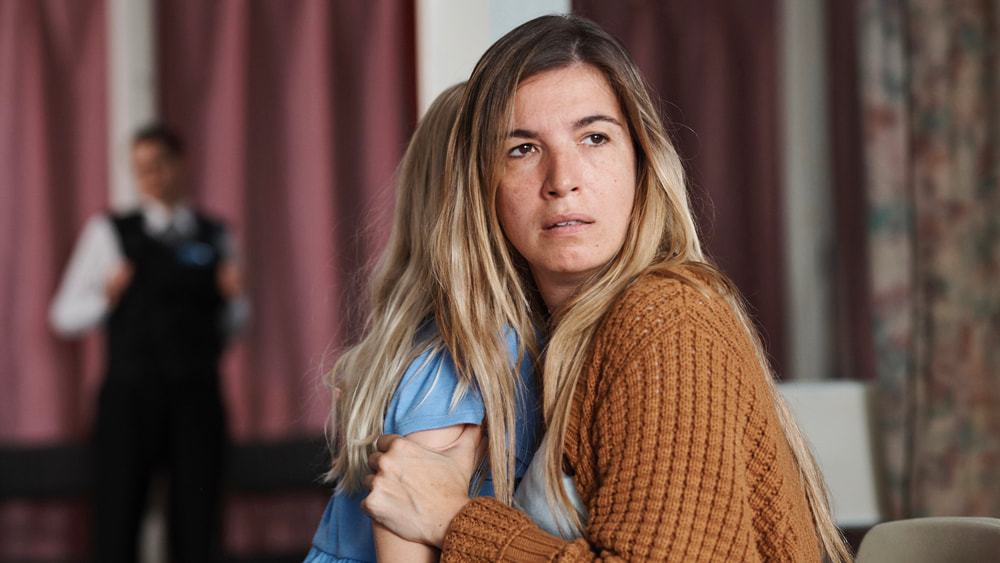 Government programs have long served an important step in protecting citizens. From drug rehabilitation programs to child protective services, these programs serve to protect and better the lives of many vulnerable individuals yet on occasion these services can end up causing harm as is the case in Ana Rocha's feature directorial debut Listen. Bela (Lúcia Moniz) and Jota (Ruben Garcia) are two parents trying their best as parents of 3 kids which is especially difficult at times as their 7-year old daughter Lu (Maisie Sly) is deaf. After a misunderstanding at school, social services intervene taking the children away from Bela and Jota due to concerns over their parenting. As the process drags on further and further, fears rise from the couple if they will ever get their children back but against the system they feel largely powerless.

Listen would not be nearly as effective as it stands if it wasn't for the acting within it. At the center of the film lies a tour de force performance from Lúcia Moniz which is stunningly emotional and well crafted. The actress doesn't just give a sad or angry performance, but a complex and confused blend of emotions that constantly wants to lash out but has to hold herself back. It is tragic and immediately forces the audience to be on her side. She might not be completely innocent and void of complexity like a saint, but the performance is so genuine that it is impossible not to get sucked into the character's drama and pain.

Where Ruben Garcia and the rest of the cast largely take a backseat role to the scenes serving as a grounding influence that never lets Lúcia Moniz get too far into her emotions that it hurts the tone of the film, it would be a shame not to mention the performance from Maisie Sly. The young actress impressed many in the Oscar-Winning short film The Silent Child but her work in Listen is even more remarkable. Her chemistry with Lúcia Moniz is perfect, there is clearly love but also enough of a distance that the drama of the plot with the concern from authorities is believable enough to not feel distracting and instead adds to the overall feature.

The screenplay, while not quite as impressive, is still also rather strong. The plot of the film easily could feel forced or messy but instead feels crafted and thoughtful. The film not only builds a tragic story but asks the audience to engage in complex moral conversations such as what these parents should do. If they play along with the system there is no guarantee they will ever get their children back but to go against it and fight the system could also make that a reality if it goes wrong. There really are only two major areas where it feels like the film is underwritten. The first would be its portrayal of the social services system. Where in this specific situation how the system acts seems ludicrous and damaging, the film doesn't quite have the confidence to also fully build the opposing view of the system and the importance of it.

For families guilty of abuse, these steps are essential and had the film built a stronger case for the importance of these steps the film overall would feel even more deep and captivating. The film clearly was afraid of the audience not being on the side of the parents fully, but the performances and overall craft of the film was strong enough that it easily could have accomplished this. The other weaker area would be the ending. Where far from terrible, it doesn't find the full emotional catharsis that the film is seemingly building to ending a moving story in a rather flat sense.

Still, Listen deserves to be heard out. With one of the best performances of the year and an overall moving screenplay, the film sucks the audience into its drama and engages them in a worthwhile conversation. The film has been named as Portugal's official submission for the Best International Feature category for the 2021 Oscars, and one has to be hopeful that this will put some attention on the film as it really deserves to be seen.
​