the horrors of hell: 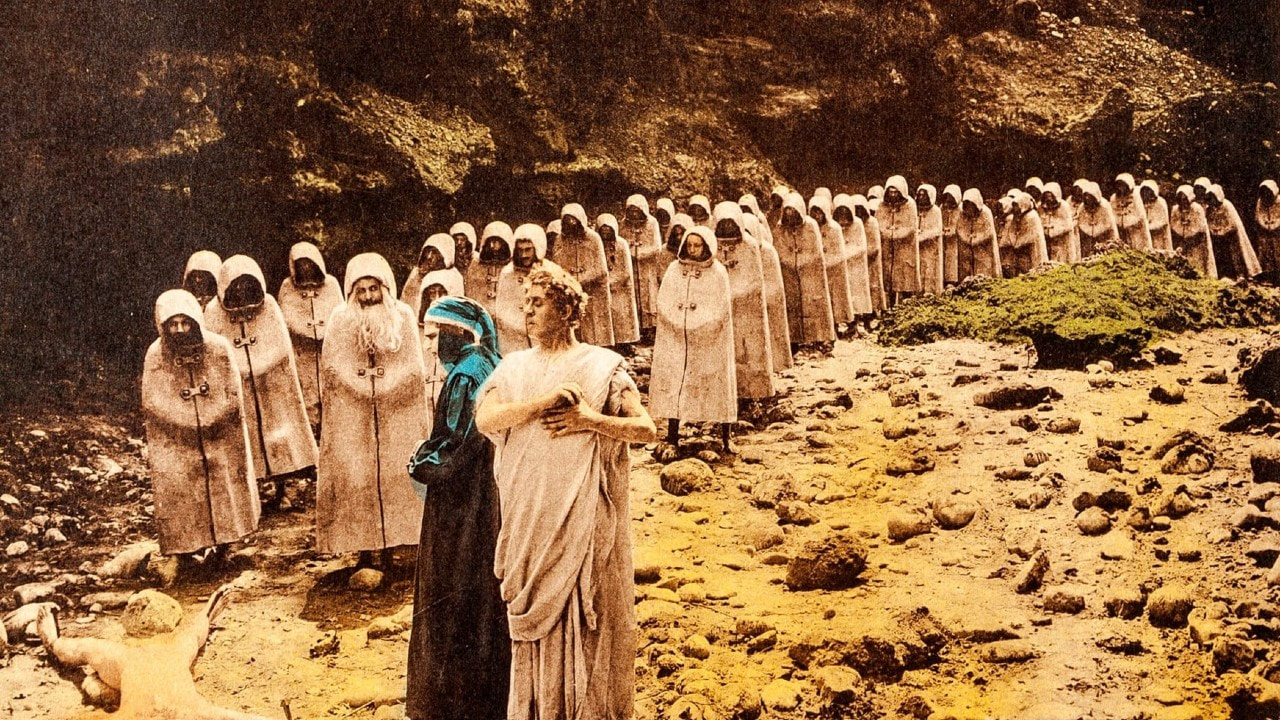 Torment and fear are emotions that have defined the human experience since the beginning. These are the emotions that have moved nations, caused bloodshed, and created endless caverns of pain. With their power, it is only natural that these emotions would rapidly find their way into the early and developing world of cinema. Less than a decade after Georges Méliès' A Trip to the Moon birthed the science fiction genre for the short form, L'Inferno birthed the horror genre for the long form. With directorial efforts shared between Francesco Bertolini, Adolfo Padovan, and Giuseppe De Liguoro; L'Inferno serves as a loose adaptation of Dante Alighieri's Inferno which sees Dante, played here by Salvatore Papa, make his journey through the  Nine Circles of Hell. Being one of the first horror features to ever grace the big screen, and also the first Italian feature film ever made, L'Inferno not only is fundamental for the evolution of cinema as an art form but still has qualities that hold up to this day.

Being a film from 1911, it is only natural that much of the film visually is going to feel dated. Viewing the film through a modern lens, the film's more basic special effects are beyond noticeable, yet there is something rather charming about the final product. Without any smooth CGI or established techniques on how to handle a story like this, the inspiration and effort create a result that holds a unique type of weight. Every second of the film is a clear effort of time and thought that didn't allow for any piece to simply go through the motions. These filmmakers were not building on an established art form but rather were inventing it as they went along in production. There is something inspiring about seeing the near-genius ways the film decides to bring the demonic horrors of hell to life and this is a craft sadly missing from much of modern cinema.

The use of bodies and physicality is also noticeable. L'Inferno is a film that consistently returns to scenes of the masses, some dead and some alive. The film orchestrates its shots and composition like a painting. Bodies are organized to create grand displays of humanity that are used to give scenes weight and power. These aren't just CGI crowds but rather are crafted visuals using flesh and blood like an author finding the right word to use in a poem. This intention makes every frame of the feature more meaningful.

When it comes to flaws, many are natural results of the film being made over a century ago. For those who are unaware of the Dante's Inferno plot, plenty of the film will be hard to follow as it can rush through much of the context to squeeze in its story with the limited 68-minute runtime. The feature tries to use place cards to keep the audience on track, but these only do so much when it comes to capturing the full depths of this nightmare. It doesn't help that narratively the film utilizes a series of flashbacks that can create a disorienting line of narrative. While not enough to ruin the film by any means, this is simply a poor introduction to this grand story and it is undeniably suggested one understands the story before they jump into this project.

While L'Inferno might not be a definitive retelling of Dante's classic, the film still has its purpose. Using aesthetics and visuals to capture the poetic horrors of this story, there is a weight and terror found within L'Inferno that can only be achieved through the cinematic platform. It makes complete sense why a story like this would be one of the earliest to grace a feature runtime and become one of the most important efforts in horror history.
Become a Patron!