Especially in his more recent films, Ang Lee is a director which has prioritized pushing technical limits of his films rather than focusing on telling compelling stories. Where all too often this results in films ranging from forgettable to just plain bad, Life of Pi is one of the rare exceptions to this pattern giving Ang Lee technical aspects to push and play with while also having a captivating story to tell being based on a novel of the same name. 16-year old Pi (Suraj Sharma) is a teenager on his way from India to Canada with his family who sold their zoo in India to start a new life. On their journey to Canada via a Japanese boat, the shop gets caught in a massive storm and sinks leaving Pi and a tiger named Richard Parker alone on a lifeboat trying to survive. 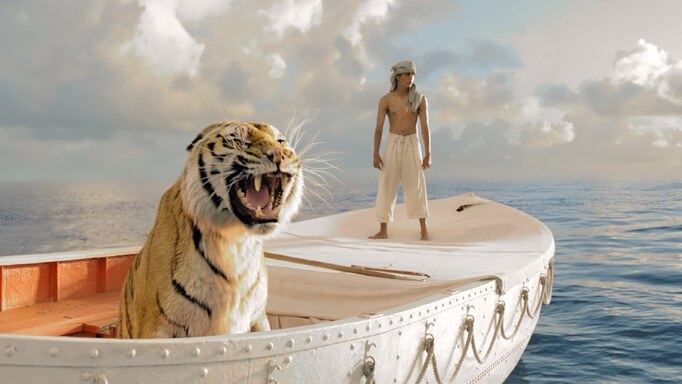 One of the most respected aspects of Life of Pi is the visuals and Academy Award-winning cinematography coming from Claudio Miranda. Using CGI to create honestly breathtaking visuals that blend reality and fantasy in a truly captivating way. The vibrant colors used creates moments that pop off the screen which are impossible not to lose yourself in. Sadly, where there are still so many effects that stand out as stunning, some of the effects struggle to hold the same impact outside of the theatrical setting. The changing aspect ratio and having various objects come out of the normal framing of a scene feel distracting and cheesy. The editing from Tim Squyres also feels out of place and distracting with out of place fades and an inefficient structure that takes a lot of the suspense out of the film. 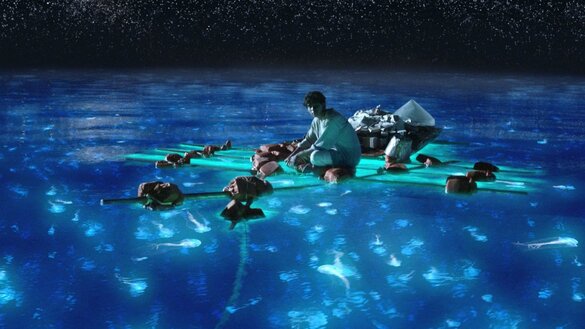 The story itself also feels misplaced at times. Where towards the end the film gives some ideas that could be used to contextualize the plot adding a depth that especially on rewatches will give audiences something to chew on. Instead of focusing the movie around this interesting idea, Life of Pi instead focuses on a religious message even outright promising to tell a story that "will make you believe in god" yet ends up falling flat mostly due to the fantasy of the film and its journey. It is hard to have a grounded impact on audiences when the moments of catharsis comes from things like carnivorous human-shaped islands. The film attempts to pass these moments off as true looks at the world and the emotional core of not just the human but global experience only to fall short. The start of the film also feels weirdly out of place building details like Pi's romantic interests in India which ultimately leads to nothing. It is clear that the film tried to adapt the story of the book as closely as possible considering this is the exact same issue that plagues the novel making the film an overall ineffective not just film but specifically an overall ineffective adaptation.

The blame for any of this film failing to connect should not be held against the acting at all as it is clearly one of the biggest highlights of the film. Suraj Sharma gives a truly incredible performance, the concept of having to carry nearly an entire film alone with only the idea of a tiger and the natural beauty of the world to play off of seems like a recipe for disaster but Sharma kills it in his feature debut. If Sharma's performance was any lesser, there is no way that this movie would work on nearly any level but Sharma rises to the occasion delivering a performance criminally robbed of awards attention. From anger to fear to charisma, Sharma has such a natural control over the flow of his emotions that brings this character and this situation to life.

Life of Pi is far from a bad movie and does deserve to be seen on the biggest screen possible for its visuals alone. Sadly on a deeper level, Life of Pi fails to work never being able to find the depth and meaning it was reaching for. The film still is effective enough to be engaging and under a different light even could be seen as an interesting take on the inner workings of a young boy's mind in a survival situation. Sadly the film itself doesn't decide to go that route and ends up being a good yet forgettable film that could have been great with a tighter script and more inspired take