the cost of coming home:

​let there be light ​movie review
​
​by carson timar 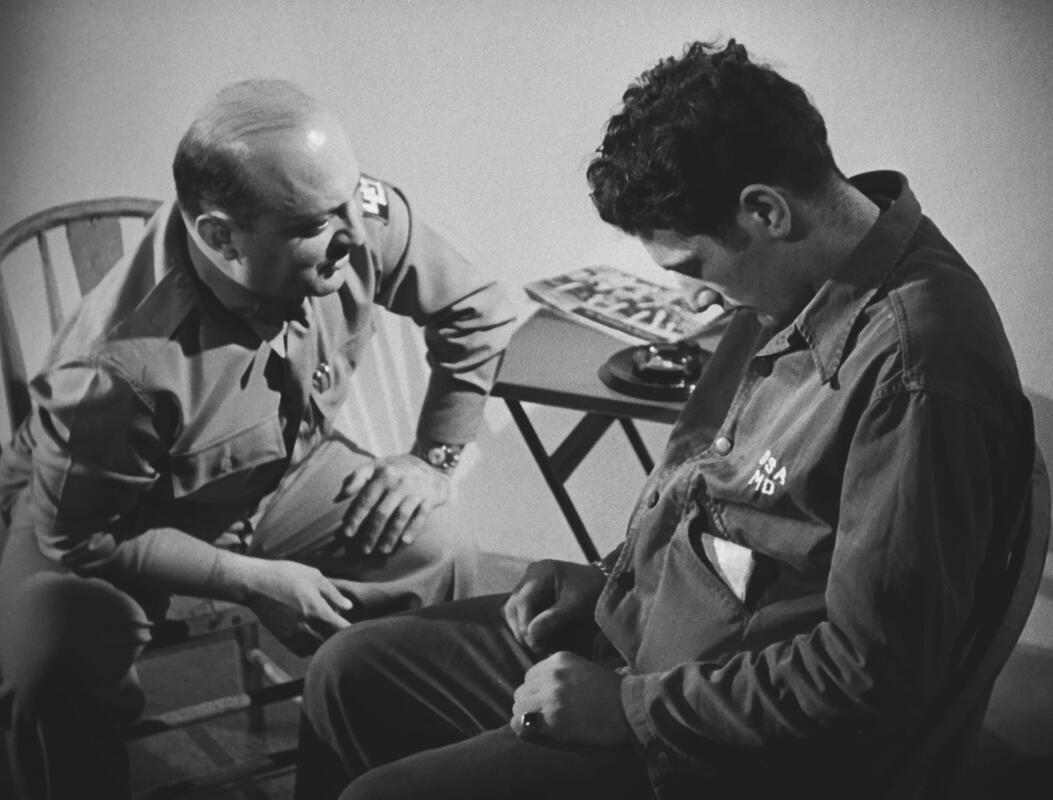 One of the many unexpected side effects of the United State's war ambitions was the toll it would take on the men who returned home. Men who were physically fine would suffer extreme physical conditions such as paralysis due to emotional trauma sustained during the conflict in what in the modern context would be referred to as PTSD. Coming out of World War II, the U.S. Government commissioned legendary director John Huston to capture the treatment a group of men suffering from this condition in Let There Be Light. The footage was so haunting however that the government tried to hide the footage worried it would hurt war efforts. The film eventually found release however and remains a truly moving piece of cinema that engulfs the audience into the subject's torture and pain.

Being conducted as a scientific film for the military by the military itself, the immediate thing to stand out within Let There Be Light is the access it has to its subject matter. No door is closed too tight for a camera to wiggle itself in with the film truly trying to capture a comprehensive look at the ghosts haunting these men and the power treatment can have. Where it might be powerful to see actors reenact this suffering or read about the symptoms, actually seeing the pain and suffering these men face is haunting on a completely different level. One of the best elements of the film is its ability to listen without judgment or interrupting. The editing by William H. Reynolds and Gene Fowler Jr. is masterful in its ability to keep a pace and momentum while also giving the patients the time to speak and share their experiences. The film doesn't need to try and poke for drama or emotion, it finds those naturally through the real suffering being shown on the screen which speaks to the power documentaries carry that simply doesn't exist in most dramatic features.

Even with this raw emotional core and fly on the wall filmmaking approach, Let There Be Light is at times shocking cinematic. The influence from John Huston is clear in style as the camera subtly moves around various rooms and subjects with a sense of inspiration and craft. Rather than being a dry film simply capturing its subject in a very academic setting, there is a legitimate cinematic edge that helps the film stand out as engaging even decades later. This inspiration transfers over to the film as a whole. It is clear that everyone working on this project truly cared about the final result and did everything in their power to make it as engaging and moving as possible.

If there is one issue with the viewing experience it simply would be age. Being from 1946, the conversation surrounding PTSD and the treatment of the condition is in its very early stages. Viewing the film in a 2020 context, it quickly becomes clear that further research is required to truly understand how to appreciate the content being seen. Regardless, Let There Be Light is a powerful film that clocking in at only 58-minutes is incredibly watchable. With a cinematic flair and genuinely powerful emotional core, this is absolutely worth taking the time to check out and is sure to haunt audiences long after the credits roll.