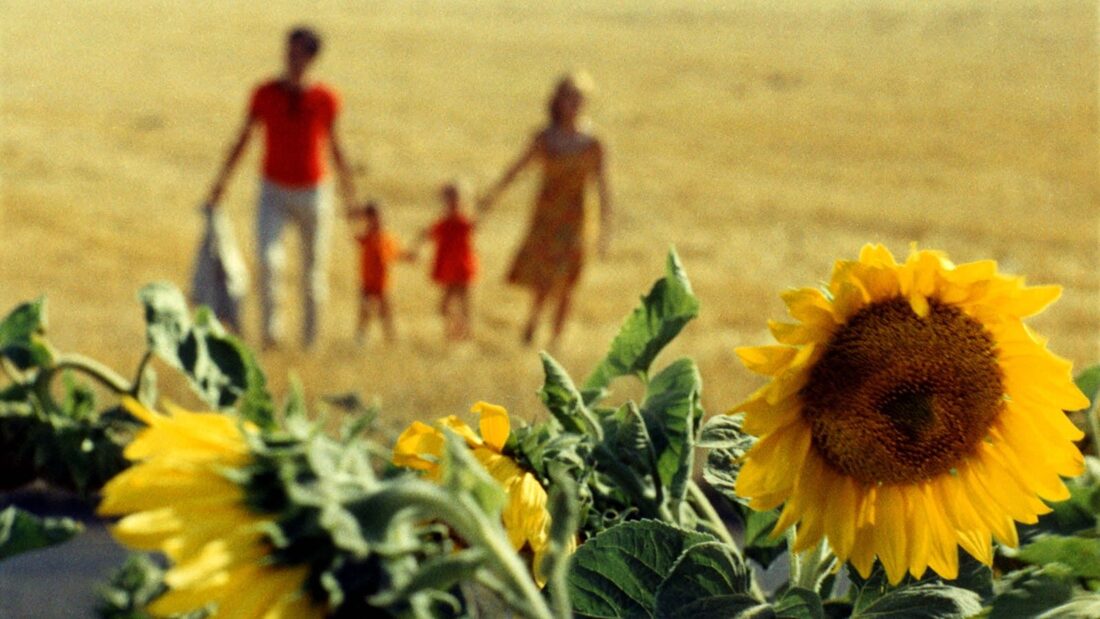 Where traditionally horror is found within the dark shadows of society, a select few films try to find the horror of the human experience in the bright sunshine instead. Agnès Varda's Le Bonheur might not be a traditional horror film both in color and its lack of scary monsters. Instead, Le Bonheur attempts to capture a much deeper horror of the human condition: the endless unsatisfying search for happiness and the pain that the emotion can bring to others. Following a young man named François (Jean-Claude Drouot) who starts an affair with a local postal worker causing dysfunction between him and his wife Thérèse (Claire Drouot); the film questions the morality of desire and what happiness even is.

The craft coming from Agnès Varda is evident from just the first few minutes of the film's runtime. Varda seemingly flexes her filmmaking ability throughout the feature both as a director and screenwriter by effortlessly capturing a uniquely human and painful painting of the modern human condition. Already in just her third feature, Varda has seemingly mastered the cinematic craft which allows her unregulated access to the deepest fears and thoughts of the human soul. Where not every audience member is going to relate to the specifics of François's infidelity, the universal backbone throughout the film is desire. Life is filled with desires which lead to pleasure, from attractive postal workers to other various vices like alcohol, the human experience can be a contradicting conundrum. Things that cause immense pleasure can be bad and Le Bonheur expertly explores this idea.

Le Bonheur is also a rather depressing look at the status of love. Love is sacred in modern society. Love is seen as a rare thing that is only found in incredibly specific circumstances where two soulmates find each other but Le Bonheur pushes back on this idea. The film largely shows how trivial love can be. Where the film never attempts to invalidate the emotions being felt by any character simply trying to be happy, the film also doesn't romanticize it. The love that François feels for Thérèse is genuine, but so is the love he feels for the postal worker. The emotion might not be sacred, but that also doesn't mean it is worthless. Le Bonheur is simultaneously an incredibly depressing and scary look at desire and the trivial nature of emotions but is also strangely comforting for the same reasons. If love is trivial, then it doesn't deserve stress and concern. The modern human experience is one of constant stress towards trying to live the best life as possible but Le Bonheur makes it clear that this is a mirage that never will truly be reached, but that doesn't invalidate the happiness felt along the way.

Where this is found beautifully in the filmmaking and specifically screenplay from Varda, the acting also goes a long way here. Jean-Claude Drouot is stunning in the lead role as an incredibly dirty man who the audience cannot help but turn against even if he is completely understood in his actions. The flaws that plague François is his humanity which is echoed incredibly in Drouot's performance. A similar moral problem is also handled with grace from Marie-France Boyer who plays the woman François is cheating on his wife with. Outside the context of his relationship with his wife, Boyer is likable enough to invoke empathy from the audience and understanding for her own quest towards happiness. The film and performances might make the audience understand but they don't ask for their support either. Where the film is asking for empathy, it is well aware that these characters are handling their situations in rather disgusting ways and is able to make the situation genuinely horrifying and nasty without going over the top and losing that empathy.

What is most shocking overall especially considering this incredible thematic weight is the visual style the film takes on. The cinematography from Claude Beausoleil and Jean Rabier lives and breathes a colorful life that is incredibly deceptive. The film hooks the audience into a bright and satisfying world only to then turn the morals of the characters and story on its head. This is a bold risk but Varda pulls it off flawlessly. This choice ends up enhancing the film's larger conversation surrounding the true identity of happiness and how deceiving it can be feeling like so much more than a gimmick at the end of the day.

Le Bonheur is a masterpiece. With one of the strongest screenplays and visual styles of all time, the film effortlessly is able to find a nuanced look at the human condition that has never been captured with the same power either before or after. With an incredibly clean 79-minute runtime, there is no reason one should not check this film out and it stands around the top of Agnès Varda's already impressive filmography.
​