from beyond the stars:

invasion of the body snatchers 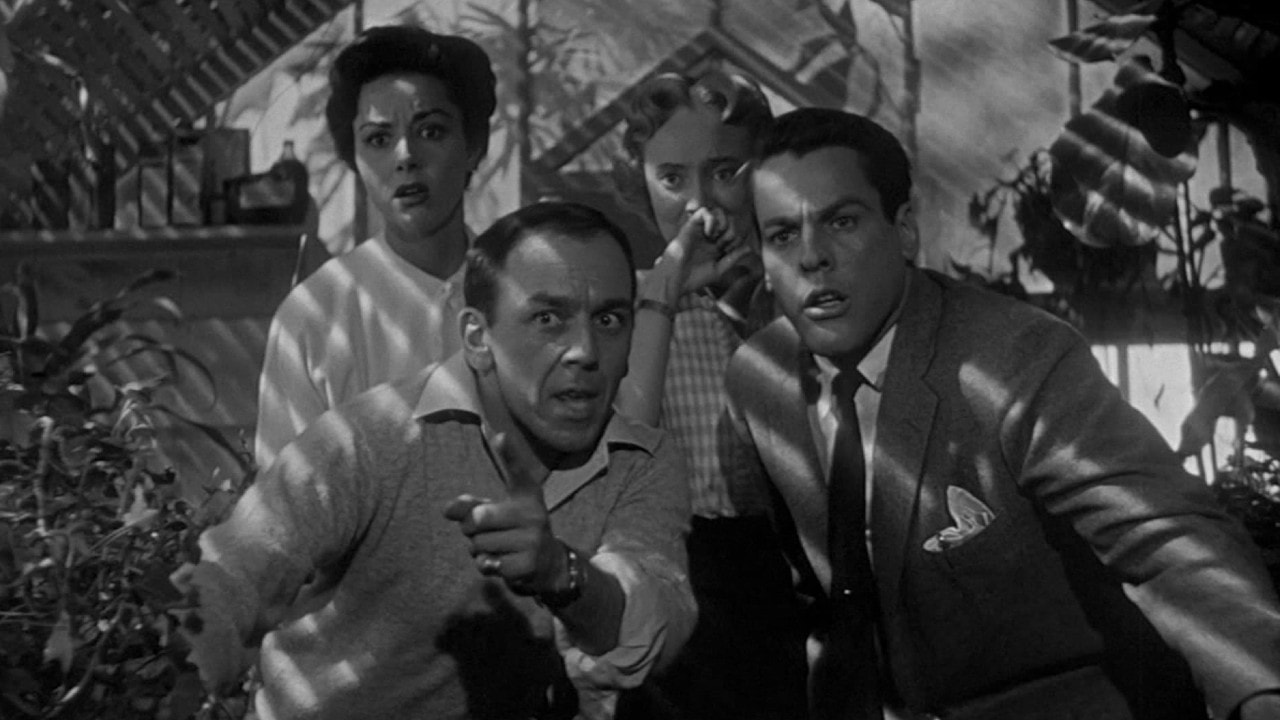 Invasion of the Body Snatchers (1956)

With an increased focus on what lies beyond the stars, it is no shock that the mid-1900s horror genre provided plenty of alien content. The idea of otherworldly entities coming to earth and reigning terror was a complex fear that overtook the American zeitgeist. While the relevance in the space age was clear, the larger political divide within America only further gave this concept a relevant poignance. While multiple features used this idea, few are as famous as Don Siegel's Invasion of the Body Snatchers.

Based on the book by Jack Finney, which came out a couple of years prior, Invasion of the Body Snatchers teleports the audience to the fictional town of Santa Mira, California, where an epidemic is spreading. People across town are claiming that their loved ones are becoming emotionless shells of who they once were, leaving Dr. Miles Bennell (Kevin McCarthy) puzzled. Things continue to escalate until Bennell, accompanied by former girlfriend Becky Driscoll (Dana Wynter), realizes that something bigger is happening; something from far beyond the outskirts of our world.

Invasion of the Body Snatchers is a rather excellent horror feature with its biggest strength being its brooding presence. Somewhat slow and uneventful for large portions of its runtime, the film broods tension as slowly things get more and more out of hand. Walking in with the knowledge of what is happening, the audience is helpless as Bennell and Driscoll stumble around town trying to find answers. Taking clear influences from the film noir style, cinematographer Ellsworth Fredericks basks in its shadows and creates a tension so well-realized that one could cut it with a knife. The evolution of the plot feels natural and the pace is quite strong as things ramp up.

From a creative stance, Invasion of the Body Snatchers also feels rather inspired. While much of the credit has to go to the book, how the film visually shows the development of this invasion is unique and the actual concepts feel not only fresh but also just exciting. The practical elements are all strong and the film works around obvious visual limitations with unique and subtle ideals that only increase the terror of the project. The audience never is given a clear look at what is happening but instead is forced to piece together various ideas and is more than likely going to be surprised by some of the film's twists and turns.

While the mystery is strong, the clear highlight of the film is the love shared between Bennell and Driscoll. Playing a fun dynamic of former lovers who are now stuck dealing with this situation while old feelings begin to rise again, these two are lovely and the chemistry shared between their actors is wonderful. Driscoll might fall into some of the limitations of female representation of the time but still is given enough personality to stand strong while Bennell is an absolutely spectacular lead. Carrying enough charisma that he easily could have stepped into the role of James Bond if ever called upon, McCarthy has both a sturdy fire and open vulnerability to his performance that is captivating in the best of ways. This is an example of a leading man that sadly just doesn't exist anymore. His energy and personality are enough to drive a scene and every time he is on screen it is an absolute joy. These two characters are the heart and soul of the project and are the main reason that the film feels as engaging as it does.

Even today, Invasion of the Body Snatchers is a rather wonderful alien thriller. Carrying both a devilish tension and undeniable charm, the film pulls audiences in with both great characters and filmmaking. The use of the film noir style adds a clear voice while the performances add the emotional substance for a truly great final project.
Become a Patron!