how to train your dragon:
the hidden world
​movie review by carson timar

How to Train Your Dragon: The Hidden World is tasked with wrapping up the acclaimed How to Train Your Dragon trilogy in a way that is not only emotionally satisfying for the series overall but also has to be a strong stand-alone film with an intriguing plot itself. It is rare for series to stick the landing in the second film not to mention the third, yet for the most part, I think this film accomplishes this and creates a genuine beautiful conclusion to these characters and their relationships 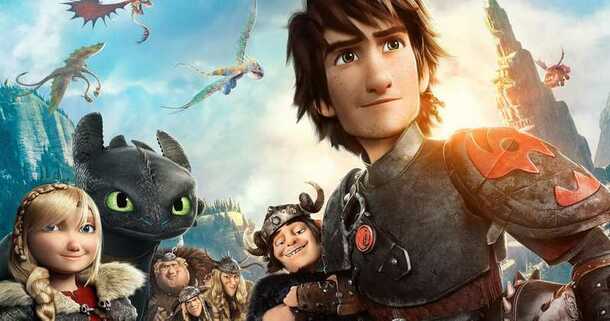 This movie picks up similar to where the previous movie left off as far where Hiccup was as a character. He still is struggling at being chief and doing what is best for his people, but here he is finally pushed and has no option but to act in this role and either sink or swim with real stakes on the line. I found this to be a solid storyline that kept all the side characters involved as they help Hiccup and showcases their fun personalities which we have grown to love over the past 3 films. It also continued to push Hiccup's narrative which has also been building throughout this franchise leading to a solid conclusion of his personal narrative. The real focus of this film though is the relationship between the people of Berk and their dragons, specifically that of Hiccup and Toothless. This has been a fantastic friendship built over these films and these two characters have been pushed together and apart time and time again creating honestly one of the best friendships I can remember especially in animation. This film uses this relationship smartly as a solid emotional roadway that is able to keep the film generally on focus and easily is the reason for the best scenes of the movie. Especially towards the end of the third act, this film is an emotional gut punch and left me with emotions that still have not fully gone away. It hits you hard and uses this friendship to its fullest.
The animation is also just incredible, compared to other films in the franchise this is a surprisingly dull and dark film most of the time which only helps the bold colors of the more vibrant scenes which are truly awe-inspiring. Yet even in the more dull scenes when it comes to the color pallet this film excels at building an environment and atmosphere, I love the wet forests and foggy seas that fill this movie and I can never say that this film visually bored me. The quality of animation is also just incredible which is continuing to become the norm with modern day animation. This film though goes above and beyond with its cinematography and costume design. These elements are normally overlooked when it comes to animated films but they are such huge standouts in this movie that cannot help but be noticed and respected. 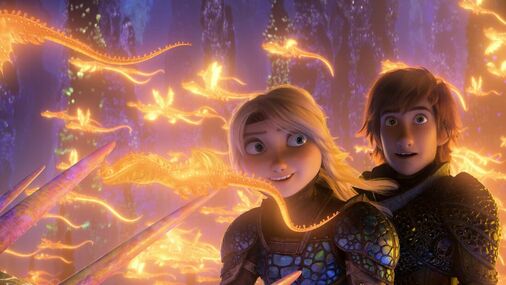 Unfortunately, this movie continues to be held back by its   plot, just like the other films in this series. Still, in their 3rd   movie, the people behind this franchise cannot figure out the   pacing that these films need, especially with the emotions   carried here. This movie feels incredibly rushed as they try to   wrap up not just the plot of this specific movie but also the   series in its entirety. I couldn't help but feel like the emotions   in the final portion of this movie was hurt because of this.   Even though the emotions in the plot at the end are great they   don't feel really deserved or naturally built. This also stands   out due to the villain portion of this film being weaker, it is a   lot of style over substance. Where I like the concept of the   villain and his dragons there is not a lot of depth to him, and the little bit that is there is hardly used at all. This film could have drawn parallels between him and Hiccup and really explored how similar each individual turned out so differently due to a single moment in their lives. Instead of exploring this or going into anything else that could have been in his character he is treated much more like a push for the other characters in the plot and ends up being one of the more forgettable parts of this movie. I really wish they would of either delegated the time away from his plot and used it to pace the third act of this movie better or just make this movie longer to allow everything time to breath and feel natural. Normally I do like shorter runtimes but honestly, this was a movie I would have liked to see another hour of, it feels like it deserves one of those longer runtimes.
Overall How to Train Your Dragon: The Hidden World accomplishes its goal of wrapping up this series in a satisfying way that has some great genuine emotion that really connected to me. I love seeing these characters journeys come to an end, yet at the same time I feel like the plot of this film specifically just doesn't work how it should and it throws the entire movies pacing totally off. I can't say I completely loved this movie but I can't help but respect and really appreciate just how great this film is other than that plot point. I do not have the same emotional connection to this trilogy that so many others have but I really liked this movie and am beyond happy so many are connecting with it as strong as they are.