Hellboy was a film that I was so confused about as it was nearing its release date, absolutely no one was excited for this film and I did not understand why. David Harbour has been the internet's favorite since Stranger Things and I thought the bits and pieces from the trailers to look fun and generally in the same vein of something like Deadpool which had taken the nation by storm. I really didn't see why people were not hopeful for this movie and thought it would surprise plenty, which I guess it did but not in the way I thought it was going to. Instead of shocking audiences by being a really fun great rated r superhero film that continued to push that genre this movie was a mess shocking audiences including me with how incompetent and terrible it was.

Starting with the only positives I can find with this film I will say that David Harbour tried as Hellboy. He has a natural charisma to him and there are moments sprinkled throughout this film where that is able to come through. The special effects for the character of Hellboy himself were also really well done and the choice to rely on practical effects to bring his character to life is a great choice. The people behind this movie could so easily have relied on CGI to create this character but nothing beats using a body suit and is easily why his character stood out so much visually as the rest of the CGI is pretty terrible. It looks lifeless and fake and never is able to create an illusion of reality like the practical effects. Though the visuals of this film are far from its biggest issues. The script is horrendous and is one of the main reasons why this film is so terrible. From a comedic standpoint, this film has some of the worst one-liners and jokes I have ever heard. Instead of having me laughing out loud due to its freedom with humor in this rated r setting I was cringing and bored as they ruined all the characters (and especially Hellboy) with out of place and badly written jokes and dialogue.
It also has no idea what it is trying to be and has so many conflicting tones because of this, sure it does have jokes (terrible jokes at that) but it often doesn't play like a comedy. There are sequences that feel much more horror inspired that come out of absolutely nowhere while it will then hit some out of place rock song and try to be an awesome action movie yet is so overly bloody and gory that it will turn off most viewers. This is where I claim incompetence on the film, it is so badly made and put together that it doesn't come together into a movie. This is a collection of clips made with waring ideas of what this film is that is more of a mess than any other movie I have seen this year. 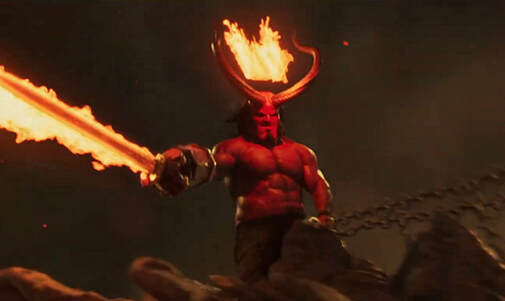 That is not even including the plot itself that was also such a disappointment. I can see that there is an interesting story somewhere here. The character of Hellboy was in a kinda interesting place being torn between the human and demon world as both will destroy each other yet he has deep roots to both. There are also just some interesting aspects to this plot that we see such as a woman with some kind of ability who lives in this crazy house on legs. Yet we nothing with these aspects and instead tell a boring formulaic story that does nothing for anyone. There is no part of this movie that they explore that feels actually interesting or unique and I found myself getting so bored early on in this movie. This will go down as one of the hardest films to sit through that I have seen in recent years as it kept pounding me with either its boring plot or its horrendous screenplay that actively annoyed me every time it was spoken. If you cannot tell I hated Hellboy, what could have been another film to show the potential of rated-r big budget films but instead not only showed how not to do that but how not to be a film at all. It had all the tools to be something special but completely missed a mark and will go down easily as one of my least favorite films of 2019. At least this is not a DCEU or MCU film so I won't be yelled at over my thoughts regarding this movie!
​