Unlike most smaller movies and especially documentaries that release early in the year, I have heard so much amazing stuff about this documentary, therefore, became really excited to see it. I knew little to nothing about this subject matter so I was pretty interested in what this movie had to say so I went to my local indie theater and was blown away by this movie. It was so interesting and well put together, I easily could see this being my favorite documentary of the year 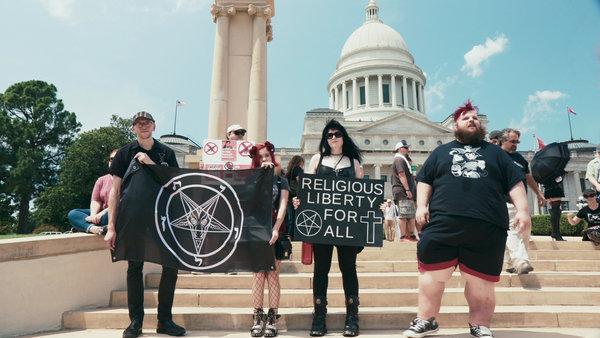 One of the big reasons why I think this connects so well and is so engaging is due to its relevance from a unique perspective. With all the current debates on topics like LGBTQ rights and Abortion the presence of religion in politics is heavy and a large part of this movie explores that. Instead of being your traditional religious group The Satanic Temple which we follow throughout this movie isn't about worshipping one god or idea of how the earth came to me but rather poses an opposition to other religions specifically Christianity which runs deep in our political system which many people including myself find to be a huge issue. America is supposed to be the land of the free yet when we only respect and follow the ideas and morals of one religion that clearly is not what America is supposed to be doing. This movie is taking a stand against that and considering I didn't know much about The Satanic Temple going into this movie it feels much fresher than most political documentaries. This is not a topic often talked about or focused on especially from a perspective like Satanists and to not only hear their arguments and philosophy but also see the issues at hand as they clearly are not respected by the government in multiple situations proved to be really interesting. 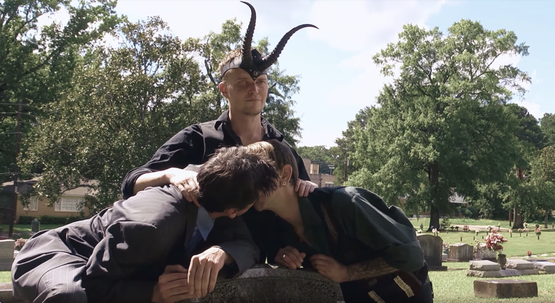 I also loved how much this film dived into the history   of Satanism and how we have treated this idea in the   past. Seeing the panic over Satanism and Witchcraft in   the '80s and '90s and seeing how innocent people had   their lives destroyed over Christian superstition which   influenced not just the public but also the government   was disgusting but also fascinating. This is not   something that is very well documented and   mainstream so it felt like uncovering a whole new part   of history as someone who didn't grow up in this time.   Even tracing back to the mid-1900s to find where   Christianity propelled itself into everyday life, this   movie has done its research and is able to give a   complete story and history on its topic up to this point which I really loved. This is also part of the reason this movie feels so well paced especially when compared to most other documentaries. I often find that documentaries (even about interesting topics) run flat by the mid-way point and feel boring, yet that was not the case with this movie at all. I felt so engaged by its subject matter and ideas that its runtime flew by really quickly and when it was over I wanted to know more in a good way. 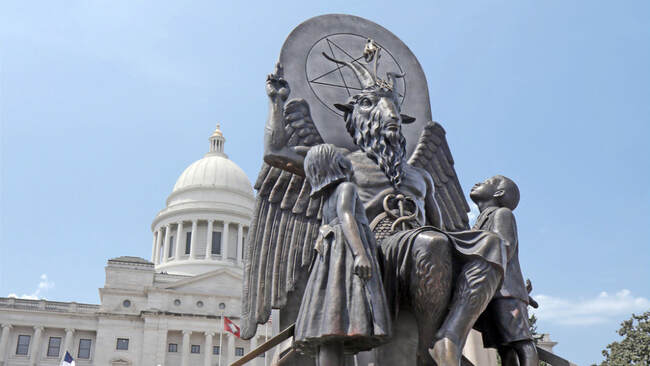 There are only a few minor issues holding this film back for me, one would be how little of a closure there is. I understand that this war in separating State and Religion is ongoing and will never truly end probably but for pieces of the plot such as an ongoing battle to get a statue of Baphomet placed on the Arkansas State Capitol grounds are left unresolved which felt a little disappointing. I often find this to be the case with documentaries like this though and it is a hard issue, finding the perfect time to end a documentary exploring modern events and issues as the stories continue to develop. I also think there are times where people motivations can be a bit unclear, they make it a point that they don't actually worship the devil as told in traditional Christian mythology but rather ideas and concepts. This seems pretty clear but as we meet more and more people who belong to The Satanic Temple some say stuff and do stuff that doesn't really match this idea and sometimes it can be confusing. I think this is more how these people are presented rather on what their ideas actually are but I would be lying if I didn't say I got confused at points and it took a while to figure it all out.
Still, I would say Hail Satan? is a fantastic movie that brings interesting and unique arguments and perspectives to a huge issue America is currently facing. It says something that I legitimately considered joining The Satanic Temple after seeing this movie. If this is playing near you please go see it ASAP, it was only in my city for 1 week and any week could be it's last near you. This is truly something special and I hope more people check it out and I am sure will be leaving the theaters saying "Hail Satan".