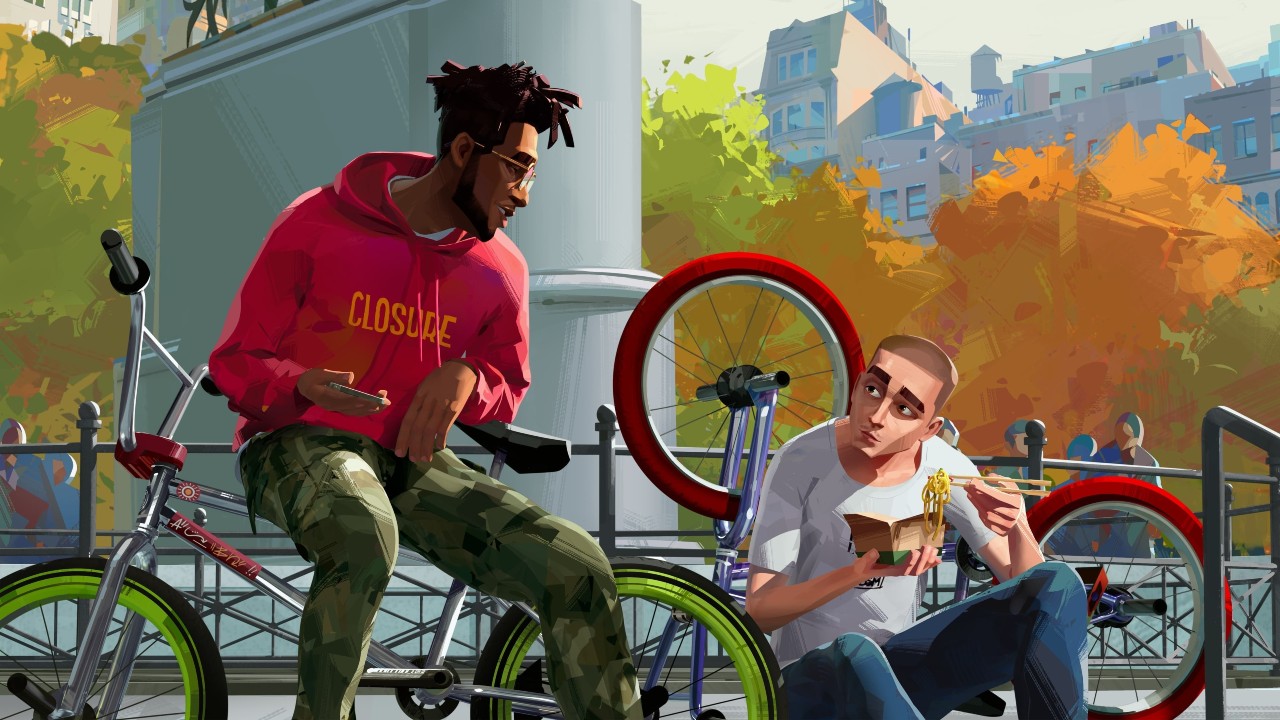 Netflix and streaming as a whole has opened the door for new creators to step into the cinematic landscape and try their hand at the art form. One of these individuals is the acclaimed artist Kid Cudi.After a gradual entry into the world of acting and producing, Cudi steps into the role of screenwriter for the first time with the animated Entergalactic. Directed by Fletcher Moules, who is making his feature directorial debut with the project, Entergalactic follows a New York City native named Jabari (Cudi) who between smoking weed and attending various parties begins a relationship with his new neighbor named Meadow (Jessica Williams). While the narrative of love and modern dating between these two is rather basic, Entergalactic succeeds largely thanks to its cast and personality both on screen and behind the camera.

Immediately, the biggest standout of the feature is its animation. Providing both depth and color unlike nearly any other project seen since Spider-Man: Into the Spider-Verse, Entergalactic crafts a visual personality that plays into its world and characters. Largely thanks to DNEG who already impressed with their work on Ron's Gone Wrong, the world of Entergalactic feels alive and in movement. Rather than feeling like a collection of crafted scenes and situations, it feels as if characters are authentically interacting with a real world filled with complexion and emotion. This is a flow that is hard to describe but impossible not to recognize. The vibrancy of the world is also unforgettable with the film crafting a pallet that truly is one of the most visually stunning experiences seen in film this year. The base quality of the animation has become remarkably high, and continually it is the inspired styles of films like this that are the ones to truly stand out and become iconic for years to come.

The characters feel equally authentic. Filled with personality and layers, despite the animated space in which they leave these characters feel real and alive. They have their small quirks and identities that match that of real humans. Entergalactic knows that in animation, it is often the small things that matter the most when building character and style with the film using its small choices to add dimensions to its characters to create a more filled out persona for them. It also helps that the voice acting is rather flawless. Both Cudi and Williams have fantastic chemistry as the two leads with their characters both standing individually and meshing together into a natural relationship. The supporting cast also stands out with those like Timothée Chalamet, Laura Harrier, Ty Dolla Sign, Christopher Abbott, and Vanessa Hudgens giving predictably strong work that helps flesh out this world even further.

For a feature with this much depth and personality, the only shame is that its story is so remarkably simple. Focusing on this modern blooming relationship, much of the drama and substance of the film feels more suited for an episode of television rather than an actual full feature. While realistic, it is hard to say that Entergalactic offers many groundbreaking takes on relationships or love with much of the story being a slower build through Jabari and Meadow's relationship. The conflict is rather basic with the major hurdles burdening the characters being stuff like the two being afraid to make the first move and Jabari's ex sending a nude that Meadow sees. These are not forced or terrible when it comes to relationship dramas, but they are hardly that thrilling or thematically rich either. It feels  quite clear that Entergalactic is seeking to be an experience more interested in vibes than depth which isn't an inherent mistake, but is a choice that makes it hard to declare the project a masterpiece either. To say this holds even a shadow of the impact of multiple other great recent animated features would simply be a lie.

Entergalactic is a film that clearly knows what it is trying to be, and succeeds massively within that identity. While more basic and simple, the film crafts a personality and style unlike any other. This is an artistic expression of everyday love and emotion that captures the real magic of the experience without any need for insane stories or turns. While Entergalactic might not be the most thematically rich film, it is hard to argue that it isn't one of the best animated films to come this year and one can only cry at the disappointment that is sure to come this awards season when the film gets ignored for the predictable and dull mainstream animated outings that 2022 has provided so far.
Become a Patron!