find the light in the darkness: 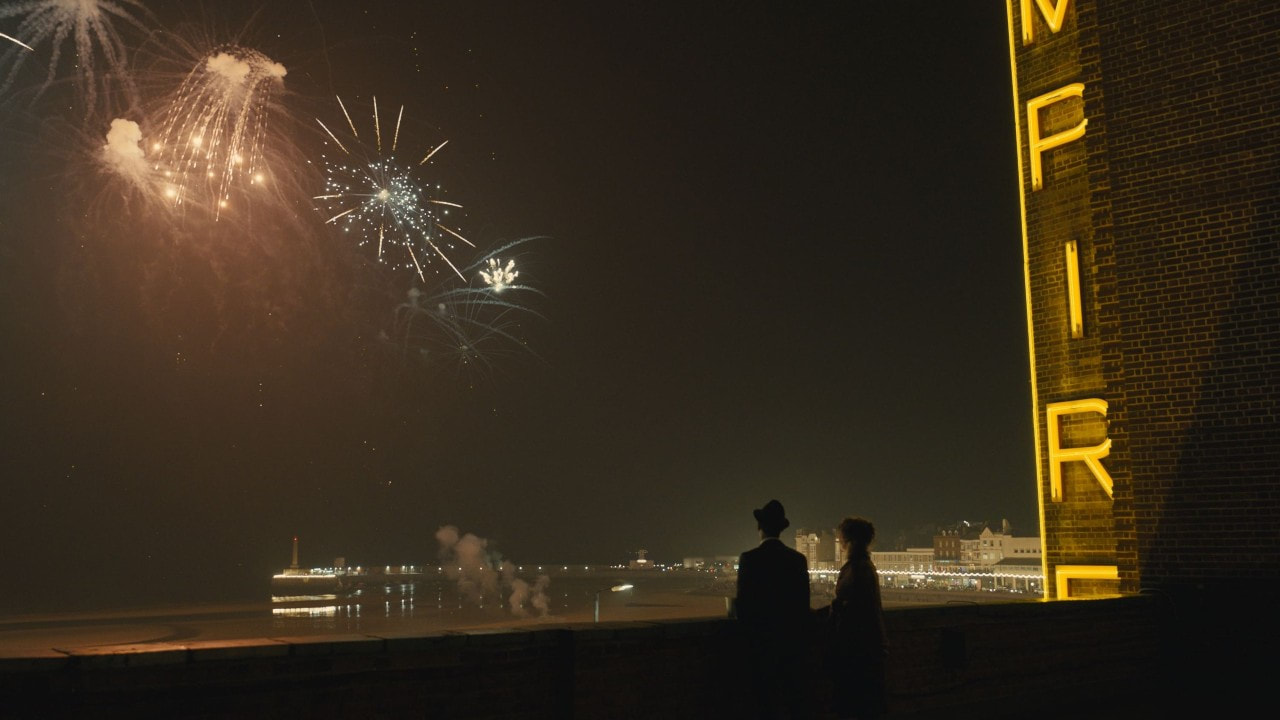 Coming off a near Best Picture win with 1917, Sam Mendes focuses his scope much smaller with his newest film Empire of Light. Set on the South Coast of England during the transition from 1980 to 1981, Empire of Light is a story of passion and pain. Hilary Small (Olivia Colman) is a manager at the grand Empire Cinema where she enjoys laughs with her co-workers and the occasional screw with her boss Mr. Ellis (Colin Firth) who is cheating on his wife. It is almost unrecognizable that just a year before, Hilary suffered a severe mental breakdown and nearly got taken away for good. Hilary seems to have found a stable life however but things are forever changed when the cinema hires Stephen (Micheal Ward). Hilary quickly falls for Stephen and the two find a bond that not only brings love to Hilary's life, but also an awareness of the racism and violence present in her community as Stephen is attacked and denied opportunities due to his race. Woven in this narrative is a celebration of media, cinema and music especially, and the power they can have on individuals and the larger community. While Empire of Light has its moments, the film is a complete mess with no strong thesis or purpose as the film manically wanders through various stories and ideas with little follow through.

Perhaps the best way to tackle Empire of Light is to explore its individual pieces that traditionally would come together to form a larger puzzle. The immediate is the technical achievement behind the film. From the opening shots of the film that sees Hilary open the theater, the film is technically brilliant. With Roger Deakins behind the camera and the pairing of Trent Reznor and Atticus Ross behind the score, it should come as no surprise that the film carries some of the best cinematography and music of the year. The grand piano swells are calculated and precise with the score being a vital element in a sequence towards the end that focuses on the power of film which ends up being one of the best sequences seen in cinema this year. The cinematography is equally crafted, yet also feels less flashy than some of Deakins other recent works. While still beautiful and effective, it is hard to say that his work within Empire of Light pushes the boundaries of what is expected from the cinematographer.

Jumping into the narrative, the story of Hilary is a confusing one. The film doesn't truly reveal its cards regarding Hilary's mental illness until about halfway through the feature leading to a confusing identity for the character that is never quite clear. While she is quick to spout seemingly important lines about gender inequality and love, the film then holds these messages as statements of illness and the plot never fully explains to the audience what is really wrong with her. Outside of passion and strong emotions, it seems Hilary is logical and truthful in her words. It doesn't help that this plot is completely dropped in the second half of the feature with its overall relation to the plot being ultimately meaningless. Colman is as strong as ever, but her power is absolutely wasted and the character ultimately becomes a failure of execution by the filmmakers.

Stephen's narrative is equally strange. While a conversation on racism is not an inherently flawed idea, the film even makes some strong connections to today, this plot line gets so often shoved to the background that it is hard to claim the film finds much to say regarding the subject that is worthwhile with its inclusion even feeling cheap at times. A side plot that sees Stephen seemingly find a passion in the projectionist booth also is completely dropped with no conclusion. Similar to Colman, Ward is giving really good work here but a performance alone can only do so much. One can have the most brilliant colors in the world, but unless they paint with intention the final canvas will end up a mess.

The side of the film dedicated to the love of cinema is almost laughably random. While film fans will find enjoyment with references to classic films and a glorious sequence in the third act, the film finds nothing to say about film that is new or inventive, much less relevant to anything else within its narrative. Instead it is the film's background focus on the power of music that finds at least a shadow of poignant relevance yet that is contained in only a single scene.

These issues speak to the film's clearest flaw: its screenplay. This is the first feature film that Mendes holds the sole writing credit on and it is clear Mendes' talents are much more noticeable as a director. The film has so many different focuses that it ends up building to nothing. It is chaotic and hollow creating a shocking yet boring feature that amounts to so little it is almost embarrassing. It is a film that has all the tools needed to be excellent, but drops the ball with no idea on how to put these puzzle pieces together. This chaos leads to a bloated 113-minute runtime that is a chore to sit through.

Empire of Light can be seen as nothing else but a disappointment. With one of the weakest screenplays of the year, the film takes masterful work on a technical level and smashes it against a wall leaving nothing more than a chaotic mess. There are sequences and performances that work and are incredible, yet as a feature there is nothing here that finds a proper conclusion or message. Mendes has crafted some of the strongest films of the last few decades, but Empire of Light is nothing but a shadow of the talent seen in those efforts.
Become a Patron!