the king of rock and roll: 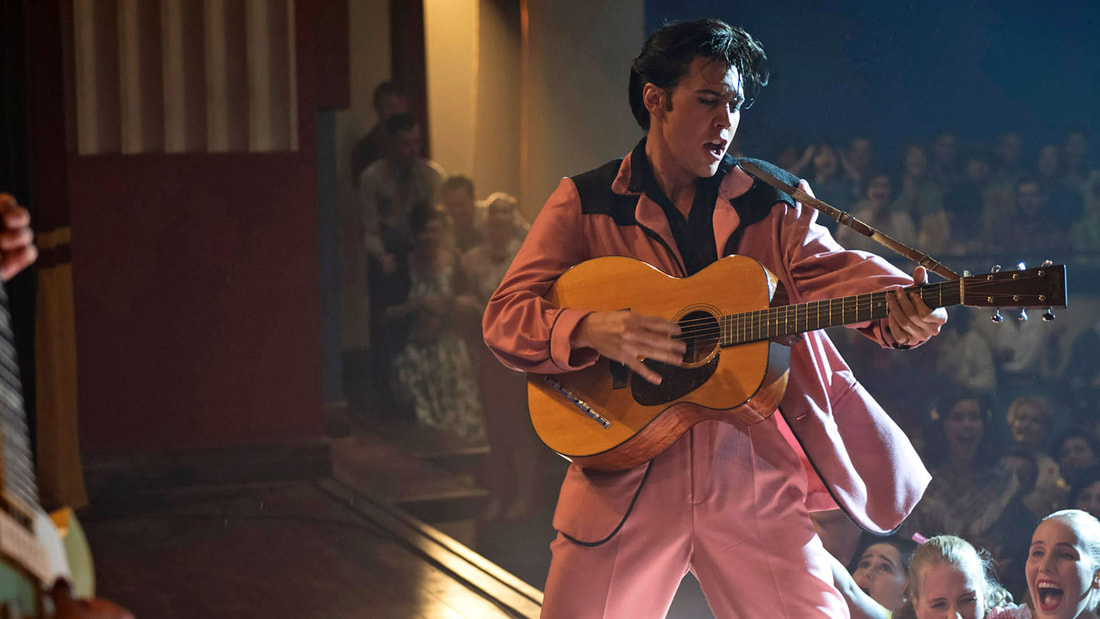 For better or for worse, the musician biopic genre has become a staple of modern cinema with at least one defining entry to the category being released every year. While some go on to find acclaim such as Dexter Fletcher's Rocketman, others fade into the void with negativity like Gabriel Range's Stardust. The newest of these films, Elvis, has found a divisive reaction among many which comes as no shock considering Baz Luhrmann sits in the director's chair. Known for his distinct style and energy which has both captivated and tested audiences, Luhrmann brings to life a dynamic capturing of Elvis, played by Austin Butler, and his relationship with long-time manager Col. Tom Parker (Tom Hanks). For those who are historically fans of Luhrmann's unique style of storytelling, Elvis stands tall as an excellent look at both the objective and subjective of the legendary figure which has the ability to introduce an entirely new generation to the power of The King of Rock and Roll.

When it comes to biopics like this, the immediate focus is going to be placed on the lead actor who is responsible for capturing the iconic persona of the subject they are playing. While some have risen to the task like Taron Egerton, others have catastrophically failed like Rami Malek with the success of their films largely being defined by these roles. A tremendous amount of pressure has been placed on the still-developing Austin Butler who is expected to bring to life one of the most iconic figures in Americana in his first major leading role. To say that Butler succeeds would be an understatement. Butler provides an empathetic yet demanding performance as Elvis that commands attention. He is electric in the performances while also being skillfully woeful when the film shows some of the darker forces Elvis is wrestling with. There are layers and complications within this performance that shows signs of an incredible skill that hopefully will only get to shine further as Butler's career continues.

This capturing of Elvis is also absolutely worthwhile. While the film does overall play Elvis as an incredibly clean figure, with the intention of pleasing the Presley Estate being clear, it reveals depths many might not know about the character. The film is blunt in connecting Elvis and his work to black creators of the time, even if some of Elvis's efforts towards black liberation might be exaggerated. The framing of the feature being that of the relationship shared between Elvis and his manager is also rather captivating. Many are unaware of the abuse Elvis faced due to his contractual status and the film builds this drama with a venom only helped by the performance of Tom Hanks. While at first it seems like Hanks might be playing into parody with a distractingly thick and forced accent, by the end the mood shifts and Hanks takes on a rare villain persona that is genuinely chilling.

Being a Baz Luhrmann production, it is only natural that the film also carries an energy that helps sell unaware audiences on the power of Elvis. While the editing from Matt Villa and Jonathan Redmond is inspired throughout, it is specifically in the performances that the film feels infectious with its energy. A flawless relationship between the editing, direction, performances, and cinematography by Mandy Walker creates an environment that makes audiences want to rise off of their feet and cheer alongside the crowds shown on screen. There is an unspoken weight and electricity to these scenes that give Elvis the x-factor which made him a star to begin with.

This isn't to say that the film is perfect. With every one of Luhrmann's positives comes one of his negatives. The feature is undeniably messy with some scenes being questionably spliced and paced. At 159-minutes, the film also just feels too long with the actual story they are working with. While it is entirely possible that these are direct results of trying to cut down the massive 4-hour cut that Luhrmann has promised exists, they do hurt the viewing experience to a point and do drag out what really should be a more clean experience.

Despite its messiness and the clear influence of the Presley Estate, it is hard to look at Elvis as being anything less than a success. With Baz Luhrmann pairing his unique talents as a director with a fantastic crew and a stunning lead performance by Austin Butler, Elvis is a captivating and haunting feature that does the legendary figure right. Both for fans of the legend and those who have no history with him, Elvis is an easy recommendation and is sure to be seen as one of the better musical biopics of the last decade.