enough murder to fill the nile:

death on the nile movie review
​
​by carson timar 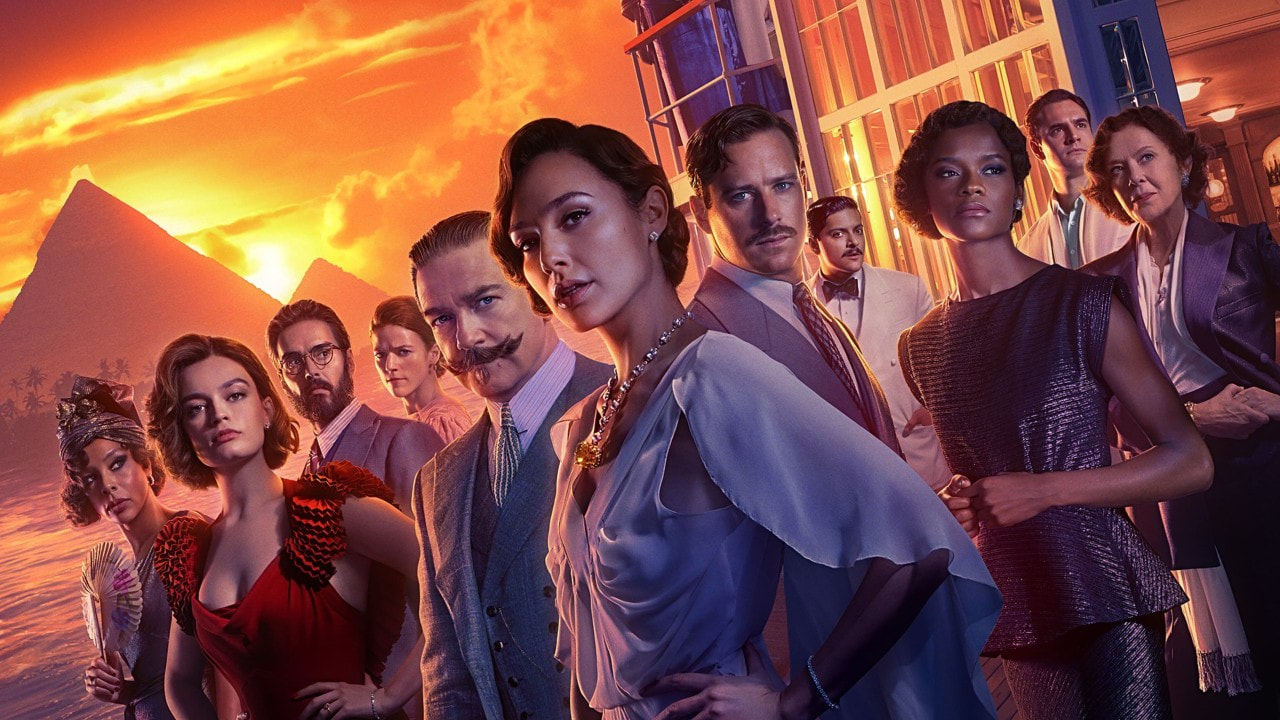 Throughout his career, filmmaker Kenneth Branagh has been seen to be inspired by an individual's career of written work and dedicated multiple projects to bring these texts to the big screen. While this pattern first emerged for the works of William Shakespeare, Branagh has seemingly moved on to the works of Agatha Christie. Following up 2017's Murder on the Orient Express, Branagh now shifts his focus from the train to the boat with his newest adaptation being that of Christie's 1937-novel Death on the Nile. Following an extravagant African honeymoon gone wrong as tragedy strikes a new couple and their friends who board a river cruise of the Nile, it is once again up to Hercule Poirot (Kenneth Branagh) to solve who the killer is.

While conceptually the idea of seeing Christie's novels be brought to life in a loose cinematic universe sounds promising, the results found from 2017's Murder on the Orient Express left much to be desired. This led to incredibly low expectations for Death on the Nile which might just be the film's greatest asset. While flawed, the film undeniably achieves far more than Branagh's previous adaptation with a strong set of characters and sense of thematic weight pushing the film to not just be competent but even poignant at times. The film not only sets off to find who out of the group is a killer, but also sets off to explore the concept and power of love for all of its faults and beauty.

While there might be standout characters and lines of dialogue within Christie's work, ultimately her legacy boils down to the quality of her mysteries. Devilishly cruel while largely unpredictable, Christie has a tendency to very casually creep onto the grand reveal while painting enough doubt into the audience to keep them guessing throughout. As an adaptation, this sensation continues onto the big screen with the mystery within Death on the Nile feeling overall strong. While it might not be impossible to guess what the grand reveal will be, the film effectively clouds doubt onto so many that it feels as if it really could be anyone by the end. This is not only due to a strong screenplay, but also a fantastic cast.

While those like Gal Gadot, Letitia Wright, and Armie Hammer might hold undeniable conflict for audiences due to choices made within their personal lives, the strength of their performances are undeniable with Wright and Hammer both giving passionate efforts. This is echoed by the cast around them with those such as Annette Bening, Ali Fazal, and Dawn French all impressing. Special mention has to given however to Emma Mackey who is stunning. Serving as the former lover of Simon Doyle (Armie Hammer) who now contends with a broken heart considering she was dumped just weeks before her wedding for her friend Linnet (Gal Gadot). Every scene featuring Mackey is heart-wrenching and moving with her performance so good that it genuinely wouldn't look out of place in an awards lineup. The only actor to truly feel out of place is Kenneth Branagh who is almost a parody he is so poor. His portrayal of Hercule Poirot is comedically forced even with a more emotional backbone given to him throughout the film's runtime.

Perhaps why the cast is able to shine so bright is because of the depth given to them. Exploring the theme of love, each character is given emotional substance to play with and are allowed to have much more compelling performances than most murder mystery suspects. One isn't suspected of killing just for money, one is suspected of killing for love. From the grief of a lost love to the desire of a forbidden love, each and every character interacts with the emotion in a meaningful manner with some lines of dialogue and scenes almost being poetic in their relation to the emotion. There is a heart and soul here that is passionate and authentic which elevates the material greatly.

These elements come together to create an enthralling and moving feature, at least in the film's second half. Sitting at 127-minutes, Death on the Nile confusingly takes almost a full hour before anything of substance truly happens with the first hour being characters wandering around Egypt and doing nothing of real weight of importance. This causes an incredibly bloated first half that sees the audience waiting for the murder and substance they are promised from the second half. The slow build when it comes to introducing characters and weight simply doesn't work here and at times it honestly feels like a struggle to get through this opening segment. While thankfully the film drastically picks up in its second half, when one looks at the overall viewing experience it is impossible to overlook the faults of this opening.

The other major fault at times is the visual effects. While the overall camerawork and production design are stunning within the feature whenever the subject is tangible, the green screen and overall visual effects are shockingly poor. The only excuse for results this bad has to be limitations due to COVID-19 as there is no excuse for a film of this size to look this bad. The screenplay also is rather rough at times with information dumps occurring particularly annoyingly in the film's opening leading to a group of characters that is not very well established, especially considering the amount of time the film had to establish them.

While Death on the Nile might not be perfect with its opening half being especially poor, once the mystery becomes afoot the film becomes nearly spectacular. While at times inconsistent with visuals and dialogue, the film contains an inspired and passionate backbone that bleeds into the performances and screenplay. It is safe to say that some of the sequences throughout the feature are hauntingly beautiful and largely in its highest moments, the film stands as one of the best murder mysteries to come out in recent memory. Full of love, mystery, secrets, and enough champaign to fill the Nile, this is a cruise overall worth taking.