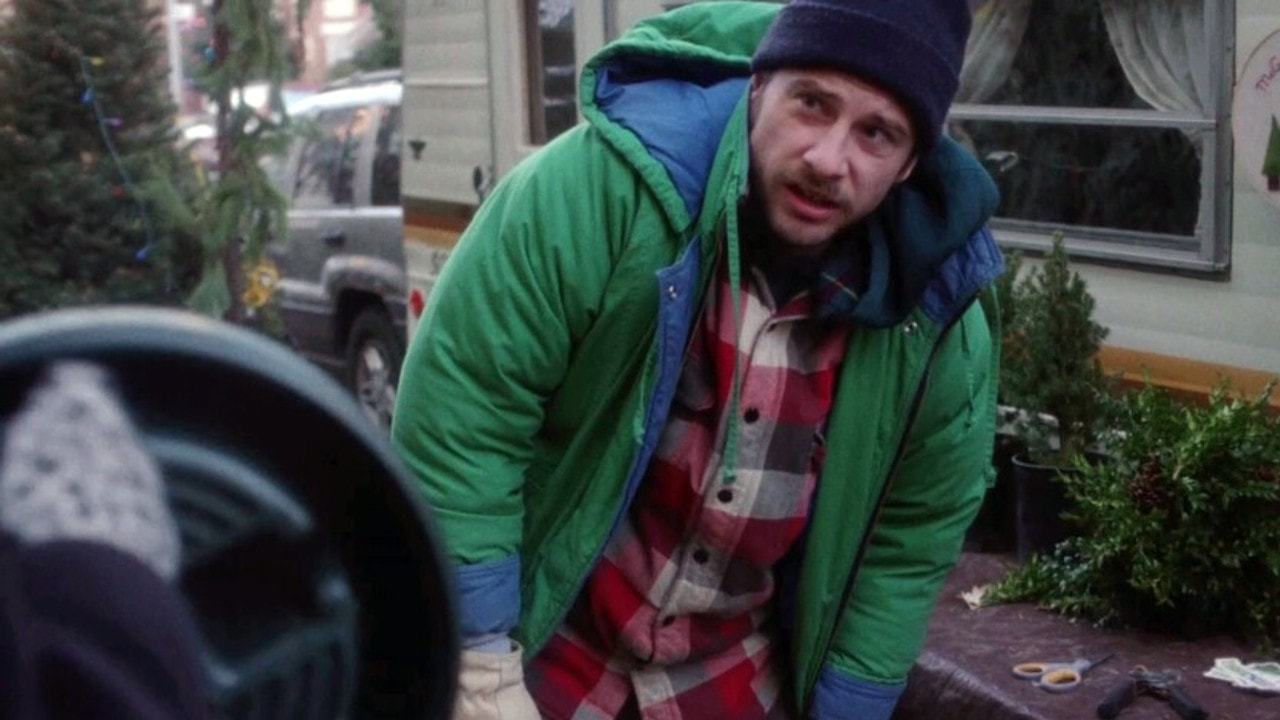 When looking at the Christmas genre, the idea of extravagance keeps coming up in nearly every project. From over-the-top stories of love blooming and overcoming the odds to the largest displays of holiday decorations imaginable, when one thinks Christmas in film they tend to think big. Charles Poekel's Christmas, Again is different. It is a film that holds no worship for the holiday or interest in the extravagance, instead it focuses on the natural real emotions that the annual holiday can hold. The film follows a young man named Noel (Kentucker Audley) who works for a month every year on the side of the road selling Christmas Trees out of a trailer in New York City. Noel is rather good at his job and has the routine down with the special highlight this year being him meeting a young woman named Lydia (Hannah Gross) who he grows a connection with. For 80-minutes, that is about all that happens within Christmas, Again. This isn't a once-in-a-lifetime event or season, it simply is once again time for Christmas and time for these events to play out yet within that, there is something oddly beautiful and special.

The everyday aesthetic of Christmas, Again immediately stands out as one of its biggest strengths. Shot on 16mm with Sean Price Williams behind the camera, the artistic empathy of the world of Christmas, Again is undeniable. Scenes will transition with lingering shots of everyday life, that on paper seem might seem rather uninteresting, while in practice are incredibly beautiful. Simple shots like a string of Christmas lights against the night sky or snow blowing in the wind as it falls are enhanced by smart shot composition and framing that make them feel like works of art themselves. This iconography also hits home much closer than any gigantic Christmas party or anything of the sort which gives the audience a deeper emotional connection to the film overall. This isn't some fantasy world one dreams of living in, this is the world where every audience member lives in.

The idea of a Christmas film trivializing Christmas is a dangerous one. In many ways, Christmas, Again works to demystify the holiday with its annual status and true lackluster impact. This is a season and a holiday that is guaranteed to come every year, on the dot, in December. Life moves on with no one getting sucked into a fairytale along the way. The film however begins to shift about halfway through with the real introduction of Lydia and relishes in the magic of this overall casual experience. While every connection and moment might not last a lifetime, the power of spending time with someone you love and finding those very connections are undeniable. Without giving the film away, the film finds its own unique take on the idea of Christmas magic and in its own way comes to the realization of why the season is so magical for so many.

The film at its most holiday spirit also wisely embraces more than just Noel and Lydia. In one of its best segments, the film sees the two go to various places delivering Christmas trees on Christmas Eve and as a result, the film offers multiple unique perspectives of how people are spending their Christmas which offer somewhat poignant looks into the modern state of the holiday. From the perfect family to a group of elderly people who only have each other to a full-blown party, these are not all necessarily the perspectives one would think when it comes to Christmas media but they are the experiences existing in the real world around the audience.

While the film might be a bit too casual for some, Christmas, Again is a sincere and small Christmas film that feels raw and authentic. There is a true sense of human spirit found within its runtime that really holds the ability to touch audiences and leave an impact. For anyone wanting a smaller holiday film to check out, this is an easy recommendation.