love is not love: 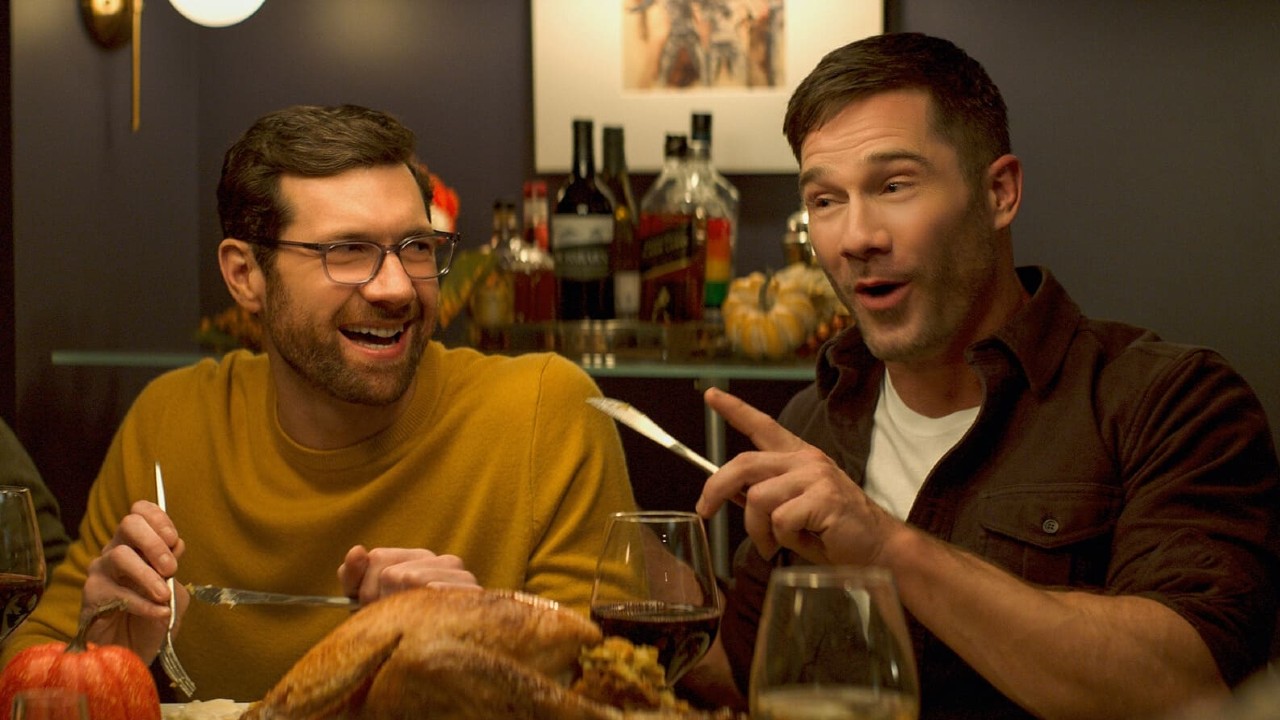 The relationship between LGBTQ+ culture and mainstream cinema has been a complex and frustrating journey for many. Relying originally on merely queer coded works as mainstream Hollywood fought against any real LGBTQ+ representation, finally, queer stories began to be seen on the big screen but even then there were frustrations. From a lack of queer voices both behind and in front of the camera to a lack of depth in many of the stories that tended to follow the same tragic beats, it is almost comedic how bad the relationship still is to this day. Still, progress is being made, and in 2022, over a century after theaters opened, there is Bros. Directed by Nicholas Stoller, Bros stands as the fourth LGBTQ+ romantic comedy by a major studio and the second to feature an entirely open LGBTQ+ main cast. Largely coming from the mind of Billy Eichner, who also plays the lead Bobby in the film, Bros is both a celebration and analysis of the modern LGBTQ+ identity. Not just is Bros one of the funniest and most important films of the year, but it is also one of the best.

With nearly non-stop comedic pacing, Bros stands as the funniest theatrical outing since Knives Out in 2019. The screenplay from Eichner and Stoller might play into various stereotypes at points but is clearly on point for the modern LGBTQ+ community with some of the most clever and laugh-out-loud scenes of the year. This is a film made by the LGBTQ+ community for the LGBTQ+ community and from Grindr culture to the state of queer cinema, Bros reflects the authentic humor of the community incredibly well. The film makes it a point not to hide any side of the culture or tone down its voice in any way, it is loud and proud with the results being beautiful and hysterical.

There is also a clear intention within Bros to produce a romance that rather and defying expectations, plays into them. Claiming an established cinematic space, Bros is defiant of the idea that a queer love story has to be tragic or different and instead crafts a romantic comedy that plays into every expectation without ever feeling dull. Largely thanks to the hand of Stoller who has a history in the romantic comedy genre, this is a wonderful love story that will make the audience's hearts swell with joy and break with sorrow at just the right moments. While the story plays into the cliches of the romantic comedy genre, it also never abandons its uniquely queer identity with the film giving space to needed conversations and perspectives of LGBTQ+ romance. It is a convergence of tradition and fresh perspective that creates an experience the LGBTQ+ community could only dream of even just a decade ago.

Make no mistake however that while Bros is a romantic comedy, there is a tremendous amount of venom found within the film. Both in the screenplay and his performance, Eichner shows a new side to himself as he pours his heart and soul into the project. On-screen, Eichner produces some of the most devastating and emotionally shocking monologues of the year that cuts into the deep soul of the LGBTQ+ community with a poignance that will catch many off guard. From the still raw wound that was the HIV/AIDS epidemic that saw an unimaginable loss of life for the LGBTQ+ family to the wounds of living in a society that is still attacking of LGBTQ+ culture, these are real scars within the LGBTQ+ community that is finally being addressed on a major stage.

In the screenplay, there are multiple scenes that are clearly deeper than just what they mean to the plot. From a gay man being told to tell his story and control his narrative, a clear message given to the film at large, to some of the queer experiences that are reflected on by various characters, there is a meaning and authenticity to the screenplay and dialogue that could not exist from anywhere but real life queer perspectives. For decades there has been a call for queer artists to be the ones to make queer media, and time and time again it is being proven that this is the road to meaningful and authentic cinematic queer expressions.

Bros is perfect. What so easily could have been a cringy and forced display of diversity from a studio has been realized as a poignant and needed modern queer text. The passion brought to the project by those like Eichner and Stoller is clear and ultimately the film feels destined to be seen as one of the most important queer features to date. Opening both the laughs and trauma of the LGBTQ+ community to wide audiences, this is a beautiful project that stands tall and proud. It cannot be stated how important films like this are and it is films like this that can change the world. It can make queer kids feel less alone and start work on breaking down social barriers built from feelings of taboo. It is incredible that a film like Bros was made, and one can only pray that this is the first of many to come.
Become a Patron!