It is almost hard for me to sit down and talk about Booksmart for so many different reasons which is why I have been putting off sitting down to write this review for a few days now. With movies like this that are just so excellent in every way, it almost becomes a challenge to find specific elements to bring up as notable elements of the film over others especially as there has already been so much discussion over the film and its highlights in the past couple of weeks. As I stumble through my thoughts I want to make one point clear, GO SEE THIS MOVIE. Especially (but not limited to) if you are in high school or college this is the movie for you and I really feel like you will end up having the time of your lives at this movie, plus you can feel good about supporting unique voices and women in film in general. So many have been quick to jump on this movie as a box office bomb but if it can hold at the box office it has a chance to actually make a profit, where I couldn't find the actual production cost for this movie comparing it to similar movies such as Eighth Grade, Lady Bird, and The Edge of Seventeen it easily could have a budget under $10 million dollars which is doable if it is able to hold steady enough over the coming weeks. 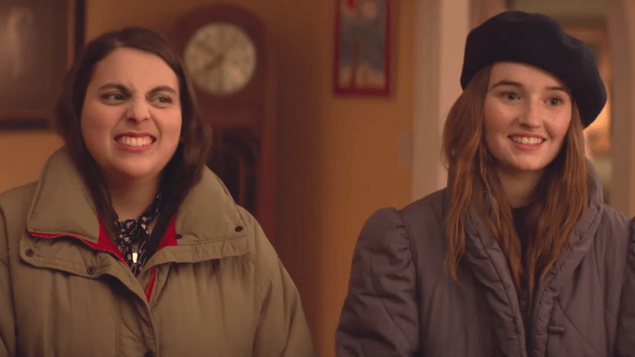 And there are so many reasons why you should check out this movie, mainly that it is one of the funniest movies I have ever seen. Whenever there is going to be a movie set in high school it is also terrifying to see what the comedy and dialogue are going to be like as most films that tackle this age range are complete misses with not just how people talk at this age but also what is funny about this time period. It's never the sex jokes or even the drug jokes that make the biggest impressions in comedies set in this time, it is the characters and the freedom that comes from being this age and seeing people fully explore who they are and what they can be which is full force in this movie. Sure the set up for our two main characters isn't the most original as these two goodies two shows finally decide to let loose on the night before graduation but both have amazing chemistry and are not just molds of what we would expect from goodie two shoe characters. They still are teenagers going through their own issues and growth beyond just school and Kaitlyn Dever's character Amy even brings an extremely refreshing angle to showing LGBTQ+ youth as she has already come to terms with her sexuality and shows someone already living life comfortable with who they are rather than the countless characters whose entire arc is accepting their sexualities (which are also really important, its just nice to see a different take). I also have to mention Billie Lourd who steals nearly every scene she is in with her over the top character of Gigi.

One of the most impressive aspects of this movie is how there is all this great comedy that is nearly nonstop throughout this movie but there is also some really deep and touching emotions mixed in flawlessly also. The friendship between Amy and Molly is put on trial as the night goes on and there was something incredibly real about this, friendships are not all just fun and games and its the best of friendships that have some of the deepest fights and this movie does a great job at exploring this with the added pressure of graduation. There is something terrifying and sad about that transition in life while also being exciting and inspiring that everyone can relate to and this perfectly shows all sides to this event. It means so much yet it also means so little in the long run and it is truly the perfect setting for this story. Without giving much away I will also say that there is a scene involving Noah Galvin's character George that felt so well developed and profound. It is a small scene but it is one nearly no one is talking about that is one of my favorites from this entire film. I think that moment perfectly represents the voice this movie has. Sure it is small and not that flashy but it truly seems profound as it tackles and explores this fascinating time in these characters lives that everyone can relate to, and I think it is important for youth going through this time in their lives to view media like this to help guide them during it. If given the chance this easily could be a new cornerstone of teen cinema and I know it is one I will be showing my teenagers if I ever have any.

3 years ago it would have been crazy to me that a film of this quality and strong direction could come from someone like Olivia Wilde who is making her directorial debut but after the insane amount of directorial debuts that have been blowing me away over the past few years it comes as no shock to me anymore. If anything when I see someone making their directorial debut (especially someone who is already involved in the film industry) I get excited to see these new voices get heard and Olivia Wilde is absolutely getting added to the list of new directors who I will be on the lookout for as they continue to grow their careers. This is one of the most incredible and exciting aspects of the film industry in my opinion as it feels like we are getting one of the strongest batches of new directors in history especially for such a small amount of time (Greta Gerwig, Jordan Peele, Boots Riley, Jonah Hill, Paul Dano, Bradley Cooper, Bo Burnham, Ari Aster, Brie Larson, Carlos López Estrada, and Kogonada to name a few).
And I could go on, if you cannot tell I have grown a deep love for Booksmart and it is one of my favorite films of the year. This is a movie that means something to me and all around is just so well crafted. Please if you have not already go see this one in the theaters and soon considering not only does it need to pick up in ticket sales to stay in theaters but also because you will want to see this one again and again and it might be leaving most theaters any week now making time for multiple viewings limited. Booksmart 4 Life.