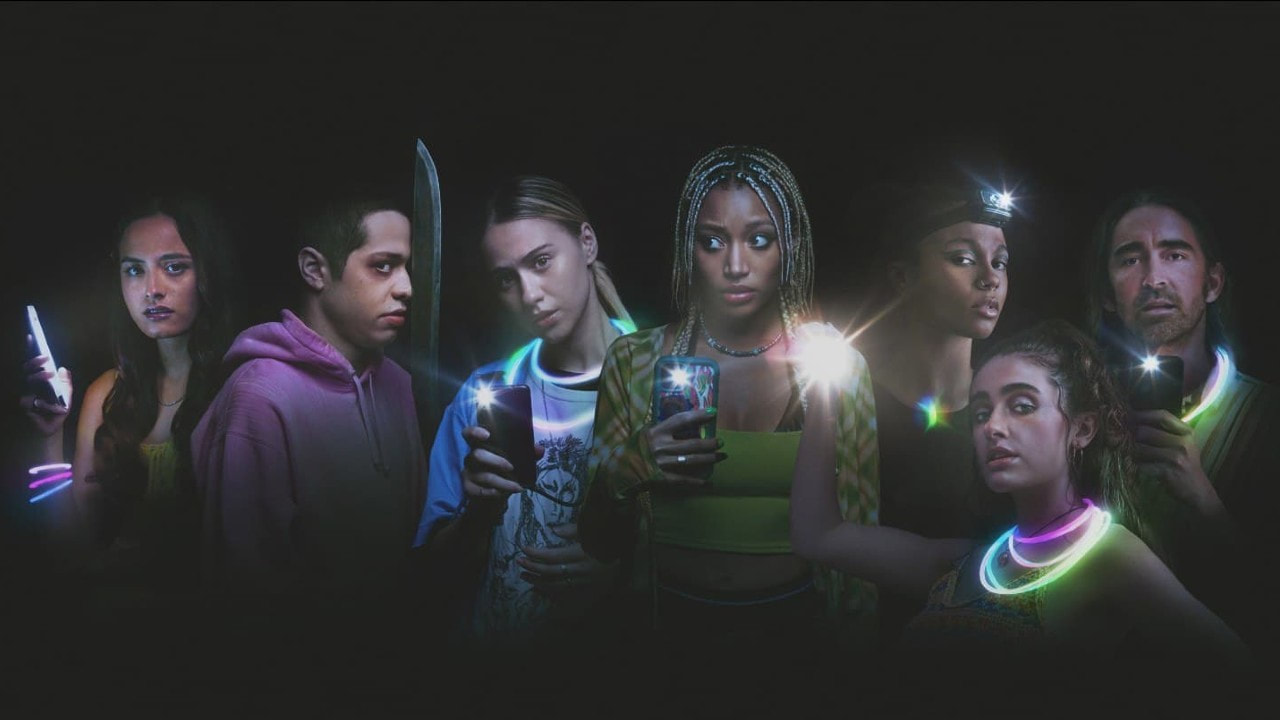 After a disappointing dormancy from the zeitgeist, the slasher genre has made a gloriously bloody return to the big screen! Normally on the pulse of genre trends, it is no surprise that A24 would capitalize on this rebirth with 2022 seeing an entire slate of slashers coming from the Film Twitter favorite. Including Ti West's double bill of X and Pearl, this slate promises plenty of darkness with the newest film to be released being Halina Reijn's Bodies Bodies Bodies. Following a group of young adults who gather to party during a hurricane, Bodies Bodies Bodies sees this group slowly drop one by one as a killer seems to be on the loose leaving only one question: who is it? Blending social commentary with an attempt at creating an elevated slasher, Bodies Bodies Bodies struggles to fully come together and create a rewarding final feature.

With a cast including the likes of Pete Davidson, Maria Bakalova, and Rachel Sennott; the comedy is obviously going to be present within the feature. Playing into modern Gen Z stereotypes, the film hopes that its comedy will resonate as a heightened play on reality. From jokes regarding TikTok dances to the struggling podcast, Bodies Bodies Bodies humor works best when it is simple and highlights its performers. Davidson and Sennott especially shine with their charisma and comedic timing allowing for the biggest laughs and most consistent humor. Some of the lines are genius such as a misunderstanding that Alice's older (Rachel Sennott) boyfriend Greg (Lee Pace) served in the military as he was called a "vet" when really he was a veterinarian's assistant. These are lines that are worked in perfectly with the blending of tension and emotion building to a needed crescendo of lightness.

Sadly as the film goes on, the more political it tries to get. While there is nothing inherently wrong with adding social commentary to horror, in fact it is a staple of the genre and film should be political to help inspire social change, Bodies Bodies Bodies is incredibly uneven with this. The commentary is brashly thrown in with little to no follow-through. Eventually, the flow of comedy and the shrieking social commentary becomes headache-inducing and the film clearly could have benefitted from reeling itself in more. Rather than actually helping build a thesis or voice, these feel like cheap attempts to get laughs from the audience with the actual success found being incredibly uneven. This is despite some strong dramatic performances from the likes of Amandla Stenberg and Myha’la Herrold with Bakalova also showing a strong depth that will be new to viewers who only know her from Borat Subsequent Moviefilm.

The slasher side of the film is sadly even more frustrating. While at first the film seems to be building something strong as the audience truly is left not knowing who is the killer and multiple theories make sense. From an incident the previous night that leaves someone angry and unaccounted for to the mysterious outsider Greg who has a motive for the first murder, the film feels unpredictable and exciting. This is until towards the end when the film tries to turn on its own genre and provide something more fresh and shocking. While it is somewhat easy to predict what this twist is actually going to be for those who pay attention and follow the logic of the killer, it is completely unsatisfying and threatens to trivialize the entire film. The biggest frustration again is a lack of clear purpose or thesis. It is an empty twist that the film never finds a true justification for.

The filmmaking is also inconsistent. Taking place during a blackout, the frame is at times so dark that it is impossible to tell what is even happening. At no point is the layout of the house clear or is the position of where characters are. These simple foundations that are supposed to help the audience find their footing and engage with the feature are sadly absent. The jumpscares are also really poor with a few cheap thrills being thrown in without any true venom or elevation. Without giving much away, the reason for this is apparent by the end, yet it is just another mark against the idea of the feature entirely.

While Bodies Bodies Bodies might have had the potential to be a great modern slasher, the film fails in its attempts to go beyond the genre it belongs to. Without having the craft or voice to build a strong thesis or identity, the film becomes a hollow mess that sadly wastes a fantastic cast. While A24 has created some undeniable masterpieces, Bodies Bodies Bodies is sadly far from this level of quality and instead borders on parody of what the A24 identity has become for the zeitgeist.