down the rabbit hole: 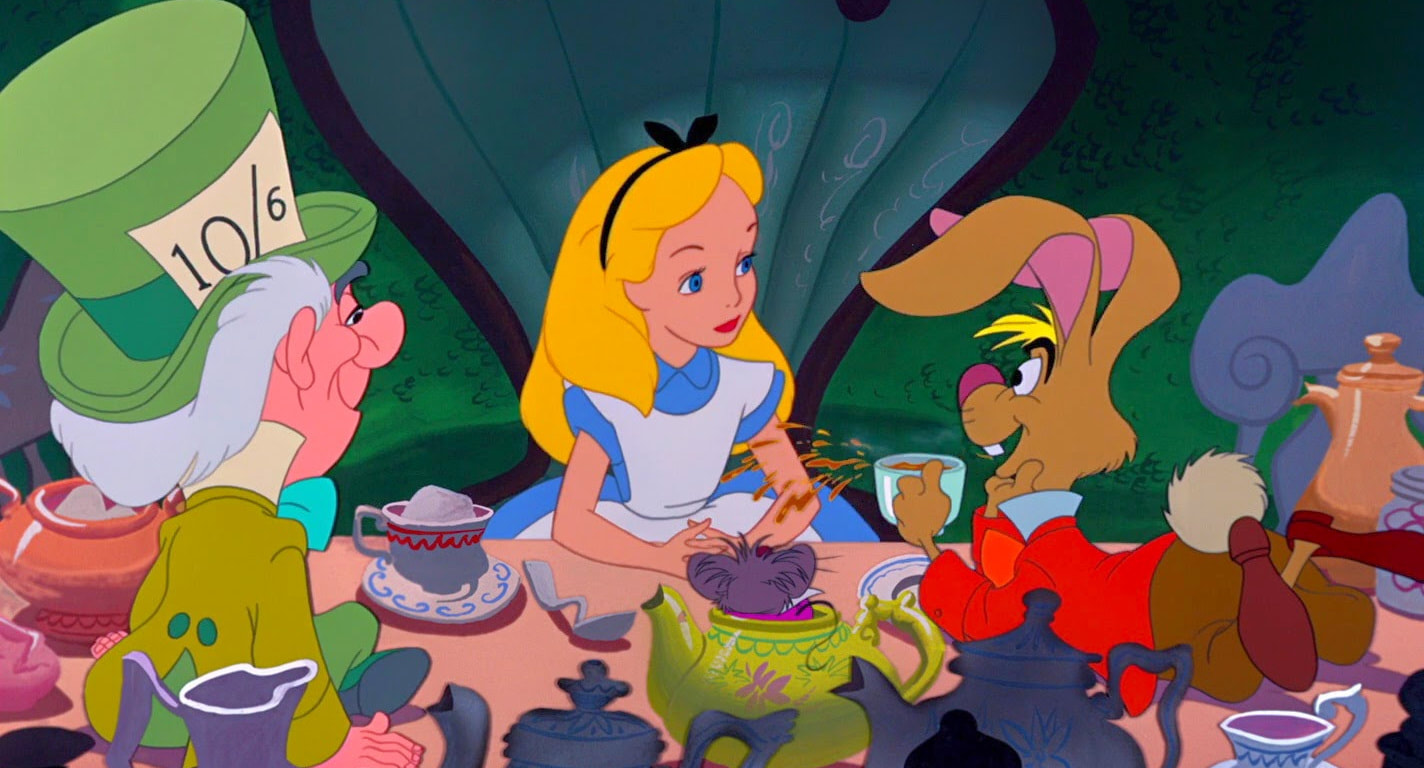 Disney's early animated works are often remembered for the classic stories of the now-iconic Disney Princesses filled with love and song. Where these stories might be the first thing to come to mind, the more one reflects on the classic Disney films the more unique stories are found. From unique protagonists to unique forms of storytelling, Disney took many chances and risks that slide under the radar when many think of the history of the company with one major bold choice being 1951's Alice in Wonderland. Unlike many other popular films of the time, Alice in Wonderland threw away the focus on building a clear story with a proper beginning, middle, and end; instead giving its attention to the chaotic and creative visuals present in the world of Wonderland hoping to capture the imaginations of viewers rather than captivate them with a super engaging narrative or story. Clearly, in retrospective this was a success with the film being considered not only a classic by many but one of Disney's best.

Easily the biggest reason why the film works so well are the visuals it presents. With an incredible control when it comes to colors, shot compositions, and ideas in general; the visuals are the main piece of the film responsible for bringing the magic of Wonderland to life. Alice in Wonderland acts as a very loosely tied together series of vignettes showcasing wacky characters and situations throughout this fantastical world. Without the natural connection of a deeper plot or journey to engage with there needed to be something to keep the audience engaged for the 75-minute runtime and the visual fun alone is nearly enough to do this. There is a reason why visuals such as the mischievous Cheshire Cat (Sterling Holloway) or larger than life Queen of Hearts (Verna Felton) have become as iconic as they are.

Where the visuals absolutely do a ton to push the effectiveness and memorability of these characters, one element not discussed nearly enough is the performances. Nearly every actor seemingly are having tons of fun bringing these characters to life perfectly capturing the unique flavor of each one. Where many like Verna Felton are able to fully lose themselves in their charisma and entertaining performances, the one actor that stands out the most is Kathryn Beaumont and her performance as Alice. Alice is a surprisingly complex character, not only does she have to be a fish out of water being transported from the real world to Wonderland, but she also then has to go along with the fantasy and not take away from the entertainment by questioning it too much. On top of all these active conflicting objectives needed in her character, she also just has to be likable which alone is a big enough challenge for plenty of voice actors. Kathryn Beaumont welcomes this challenge and produces an impressive performance that stands out as one of the most underrated lead performances in Disney history, probably due to the lack of a truly iconic song.

Where the characters and visuals do an impressive job helping the movie stand out, it doesn't completely save the film from having its down moments. Especially between the more memorable scenes and characters, the film does drag and feel like it is just wandering until it finds something actually captivating. There is very little the film could do to avoid this being a feature film with such a loose main story and the fact that it isn't an even bigger issue should be celebrated as an accomplishment. The ending of the film also is really underwhelming. Where it might make sense, the actual execution is so casual and unsatisfying that it ends up leaving a bad taste in your mouth.

Alice in Wonderland overall might not be a perfect film but remains one of the most interesting and unique additions to Disney's early filmography. Sure the film might not be the most well crafted and has its down moments, but the descent into chaos and madness is something worth seeing and has its charm. At only 75-minutes, the film even with its downfalls is easy enough to watch and has the memorable visuals and characters to make it worth the time needed to check it out. If you are someone who hasn't taken the descent into Wonderland before, give this one a go and at the very least expect a genuinely fun time for a lot of the runtime.