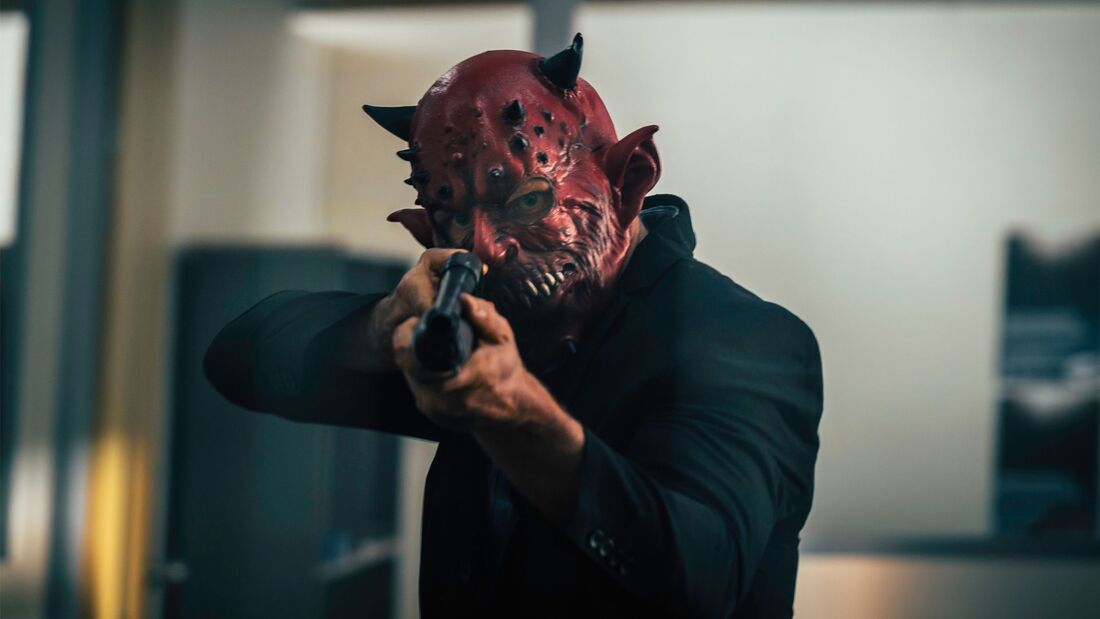 Alister Grierson's newest feature, Bloody Hell, is easily one of the most fun film experiences of the year. The film which is streaming as part of the 2020 Nightstream Film Festival drops the audience into the deep end of the pool as the mysterious character of Rex (Ben O’Toole) has nearly reached celebrity level after stopping a bank robbery. Not everyone seems to be a fan of Rex however as he is kidnapped by a mysterious group of people and has to fight for his survival. The film is charismatic and over the top both with style and substance leading a genuinely enjoyable viewing experience.

The largest tool that Bloody Hell carries is Ben O’Toole himself. For an actor who ultimately stayed on the side lines for the majority of his filmography, the sheer charisma and energy that comes from Ben O’Toole in the leading role of the film is shocking. Almost channeling a bit of Ryan Reynolds's take on Deadpool, Ben O'Toole even in the darkest moments is able to crack and joke and keep the tone enjoyable in a way that feels natural and never as if it is taking away from the stakes within the film.

The actual intrigue in how the film frames its plot also helps greatly with engaging the audience. The film doesn't explain much, allowing the audience to think for themselves and engage with the world the film takes place in. The framing of Rex's fight for survival is tense and well crafted with the film finding the perfect balance of horror and charisma to where both sides end up enhancing each other. Yet in this build comes one of the few issues within the film, the grand reveal.

When a movie takes on the structure that Bloody Hell took on, it becomes expected that there will be some grand reveal but Bloody Hell doesn't quite live up to these expectations. The film does have a reveal, but it is the logical answer that seemed clear from the very beginning of the film which makes the overall structure feel a bit dissatisfying and confusing as a choice. The comedy where largely talented, also does have some moments where it misses the mark. Bloody Hell clearly is a film based within the male gaze and there is a continual issue within the film regarding how it views women especially with some of the comedy directed towards them. Where it isn't enough to ruin the film and it doesn't define the project, there will be a handful of jokes that miss the mark and make audiences feel a bit gross.

Luckily the film does move on rather quickly and is largely enjoyable beyond this. Where the movie might not be a masterpiece, Bloody Hell is absolutely watchable and enjoyable. The film features a truly fantastic lead performance from Ben O’Toole and carries an exciting charisma for the majority of the runtime.